I can play the butcher, the baker, and the candlestick maker. – Claude Rains

He may be invisible in one place, but he is sure to appear as a masked figure somewhere else! You may see him in a French Police uniform at the cafe, but he will most certainly be seen in princely medieval garments at the local tavern! Who could possibly fit all these descriptions? Who could be the Invisible Man, the Phantom of the Opera, the Prefect of the French Police, and an evil prince of England? Why, Claude Rains, of course! Read on to learn how the Pure Entertainment Preservation Society will be honoring this screen legend on his 130th birthday!

This year, on November 8-10, we of PEPS will be hosting the Second Annual Claude Rains Blogathon, the thrilling sequel to last year’s gala! Our previous blogathon honoring this beloved actor proved to be our most successful ever, so how could we help but reprise it? Join us for three thrilling days as we celebrate all the brilliant performances of this illustrious star of the cinema! Now, without further ado, let us move on to the rules!

Here are the banners for the Second Annual Claude Rains Blogathon! Please put at least one in your article and use them to advertise the blogathon on your website! 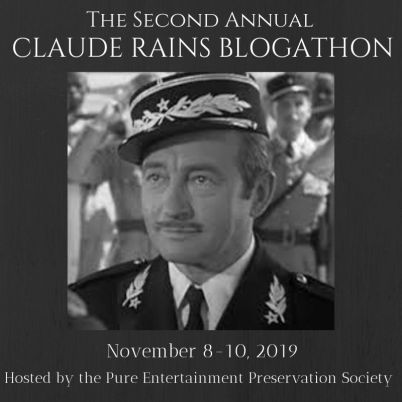 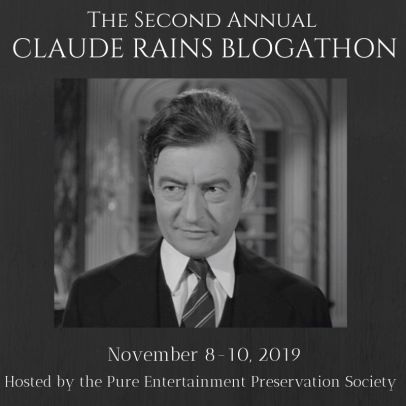 This banner features a shot from the film Now, Voyager (1942); in this scene, Dr. Jaquith (Claude Rains) meets the nervous spinster Charlotte Vale (Bette Davis) for the first time. 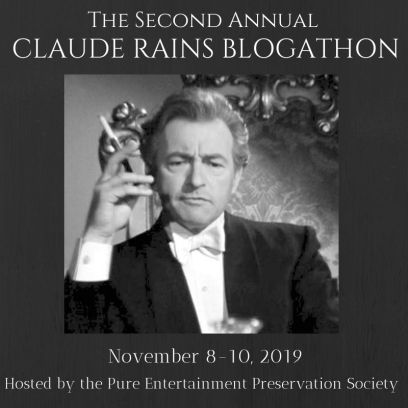 This banner features a shot from the film Deception (1946); it is from the climactic dinner scene in the film, when he tells Christine Radcliffe (Bette Davis) about his premonition of death.

This banner features a shot from the film The Clairvoyant (1935); in this scene, Maximus (Claude Rains) is tried for causing a mining accident by predicting it.

This banner features a shot from the film The Adventures of Robin Hood (1938); in this scene, the coronation of Prince John (Claude Rains) is prevented by the return of his brother, King Richard (Ian Hunter).

Please help us make this blogathon as successful as last year’s by joining it and advertising it on your own website with one of our banners!

9 thoughts on “Round up the usual suspects! The Second Annual Claude Rains Blogathon is coming!”