Today is Sunday, so it’s time for another 52 Code Films article. Every week, no matter what, I have to make sure that I watch at least one Code film which I have never seen before. It can be any movie, as long as it is an American film released between July of 1934 and 1954. Some weeks I have watched more than one new movie, but I always just review the first movie I watched during the week. I publish my articles on Sunday. We are now on week forty-two. There are only ten weeks left in the series this year! 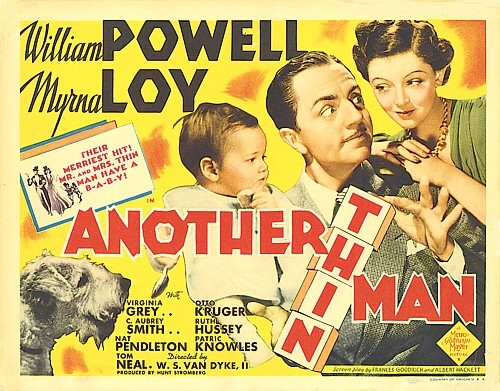 The detective of “Thin Man” fame and his beloved wife are returning to New York, accompanied by their baby, who is almost a year old. No sooner have they arrived in their apartment than they receive an urgent call from the wife’s lawyer. He is a strong-willed, elderly man who was in business with her father and manages her vast estate. He is convinced that a former employee of his who went to jail because of the company’s unscrupulous business is out to kill him. Now that the man is out of jail, he has taken a house just down the road from the lawyer’s Long Island estate, and he and his henchman have been terrorizing the wealthy man. The couple, known for their detecting in the past, go out to Long Island with their son and a new nurse they just hired. No sooner have they arrived than strange things start to happen. There is obvious dissension between the lawyer and his adopted daughter, especially involving her engagement to one of his employees. Another young man who works for him is also enamored with the young lady. When walking around the estate to investigate, the detective decides to pay a visit to the suspected assassin. While there, he meets his female assistant, a blonde who draws a gun on him. The thug says that he has been dreaming about the lawyer dying, and his dreams always come true. He obviously is making threats which he hopes will make the detective leave, but the family decides to spend the night at the estate. Just after midnight, a shot is heard. The husband rushes into the room to find the lawyer dead. His throat has been cut, his wrist is broken, and there are signs of a struggle. Who killed him? The threatening neighbor is the natural guess, but he can’t be immediately found. In the meantime, the detective on the case questions everyone in the house. When the daughter’s fiance gets shot by the police outside after shooting at the Thin Man detective, things get more complicated. The group moves back to New York to unravel the mystery. However, each clue just makes the mystery more confusing. It will take a little boy’s first birthday party attended by thugs and their baby’s to solve this case!

The detective is Nick Charles, played by William Powell. His wife is Nora Charles, played by Myrna Loy. The lawyer who fears for his life is Colonel MacFay, played by C. Aubrey Smith. His adopted daughter is Lois MacFay. Lois’s fiance is Dudley Horn, played by Patric Knowles. The other young man who admires Lois is Freddie, played by Tom Neal. The suspected criminal is Phil Church, played by Sheldon Leonard. His henchman is Dum-Dum, played by Abner Biberman. Church’s moll is Smitty, played by Muriel Hutchison. The detective on the case is Van Slack, played by Otto Kruger. The housekeeper is Mrs. Bellam, played by Phyllis Gordon. The nurse which the Charleses hire for their baby is Dorothy Waters, played by Ruth Hussey. 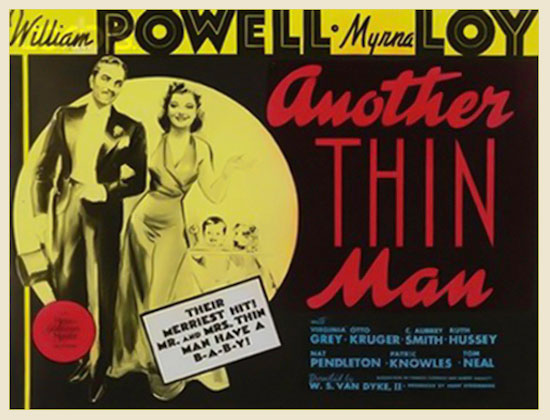 This film was directed by W. S. Van Dyke II. It was produced by Hunt Stromberg. The production company was MGM. The screenplay was written by Frances Goodrich and Albert Hackett. It was based on an original story by Dashiell Hammett, “The Farewell Murder.”

This is a good Code film. I classified the first Code Thin Man film as fair because of the excessive drinking. Nora doesn’t seem to drink at all in this movie, and Nick doesn’t appear to be drunk, although he still drinks. Having a child makes the couple even more steady. I thought the handling of the murders was very delicate. Corpses were not shown, and the murders were not explicitly depicted. The violence was very minimalist. The depiction of Smitty, the moll/accomplice of Phil Church was very delicate. There was no implication of an immoral relationship between them, and they do not go away together at the end, as they had planned. The ladies’ evening gowns are all decent. The only costume which gave me pause was one which a rhumba dancer in a nightclub wears. Her midriff is bare, and her navel is exposed. However, I believe it was excused because the costume was an authentic native one. In this case I don’t believe the skirt was low for the purpose of being indecent. For that reason, the PCA allowed it. 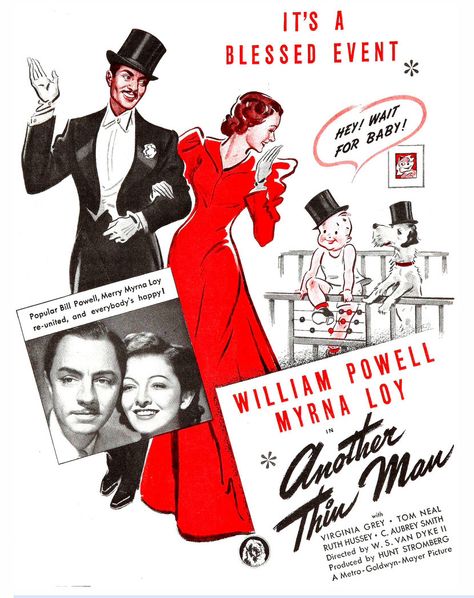 This is a wholesome and decent murder mystery. It is clever and witty rather than violent and sensationalist. The acting is excellent. William Powell and Myrna Loy are wonderful together, as always. I think that this is my favorite film in the series so far. I thought that their baby, Nicky Jr., was adorable. His inclusion adds a lot to the film. His interaction with Asta, their faithful dog, is charming. This movie includes the witty humor which is characteristic of all the films. One of the funniest moments was when Nora lets the playful baby crawl over the sleeping Nick. Then, she tells her half-awake husband that it is his responsibility to tell their son about life. “Alright,” Nick says, reaching for the baby to explain things to him. Nora innocently informs him that he can tell him when he is fourteen! I enjoyed seeing Mr. and Mrs. Charles as parents. The rest of the cast was excellent. A diverse cast of characters created a great feeling of suspense and suspicion, since one doesn’t know whom to suspect. The actors are so subtle that you can never begin to guess who might be the guilty one!

I highly recommend this film to my viewers. If you like classic mysteries, you will love this movie. It is suspenseful, intriguing, chilling for a few moments, and intelligent. It is also very funny and lighthearted at moments, which offsets the suspense of the mystery. If you appreciate movies which are based on clever scripts and great acting, you will appreciate this movie. It is one of the best collaborations of one of the most iconic classic Hollywood film couples, William Powell and Myrna Loy!