Today is Sunday, so it’s time for another 52 Code Films article. Every week, I watch at least one movie made in the United States between July of 1934 and 1954. This is the time period which many call the Golden Era of Hollywood. We call this specific period the American Breen Era, since it is the time when Joseph I. Breen was the head of the Production Code Administration (PCA). The PCA’s job was to self-regulate every American film, cartoon, and short to ensure that it complied with the decency standards of the Motion Picture Production Code and thus would be free from objections for any audience members. Under Mr. Breen’s wise leadership, the organization was very successful, and Hollywood enjoyed its brightest age. The purpose of this weekly series is to make sure that I continue seeking out Code films which I have never seen before. 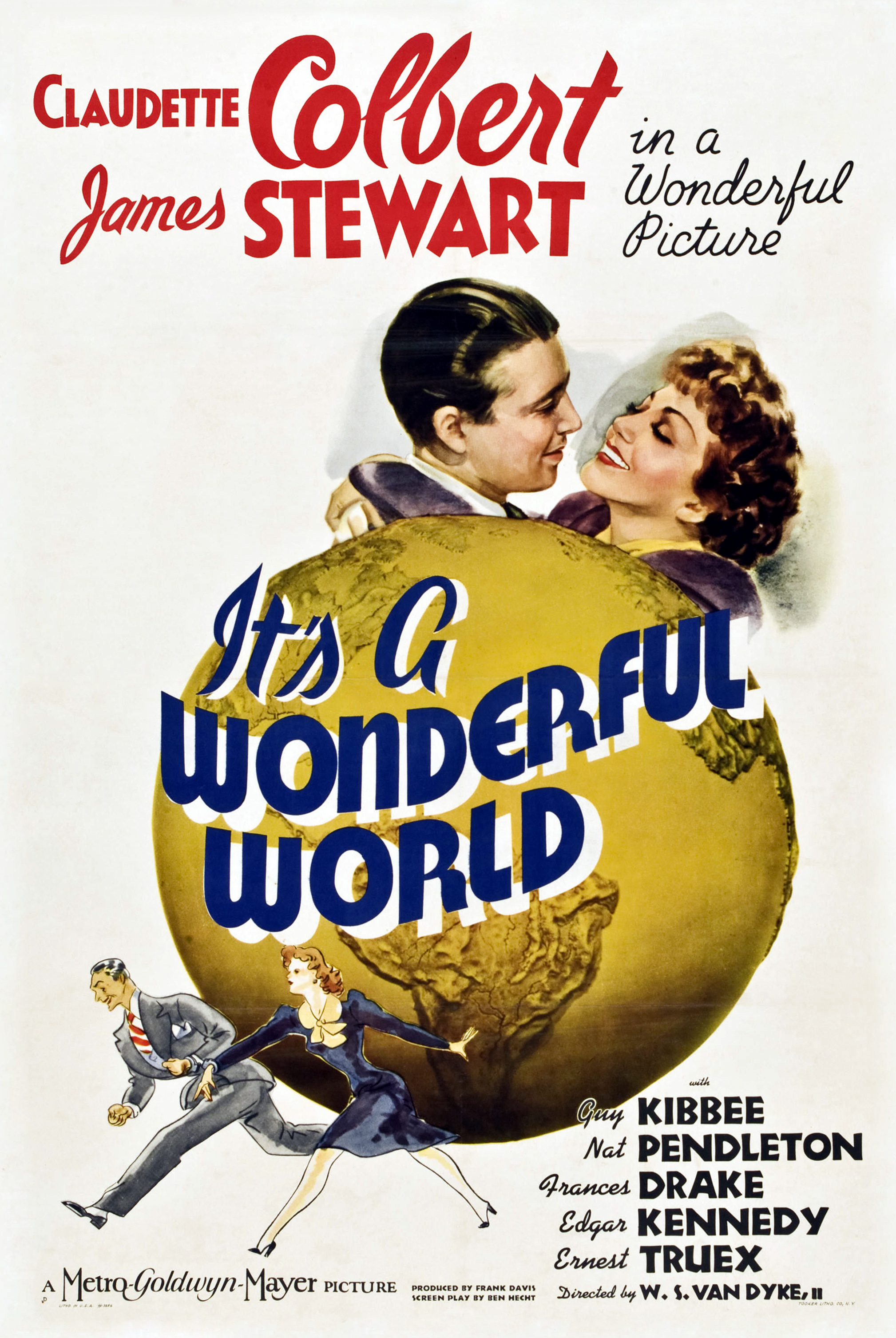 Today’s topic is It’s a Wonderful World from 1939. I found this movie on Amazon Video. I had read a fellow blogger’s review of it and was fascinated by the only pairing of James Stewart, one of my favorite actors, with Claudette Colbert. On Tuesday, I was browsing Amazon Video to look for a new film to purchase and watch as my new Code film for the week. When I saw this movie, I knew that I wanted to review it this week. Every movie I watch in this series gives me a deeper understanding of the Code and the Breen Era and a more thorough knowledge of classic films! This will be my last article in this series in October.

A private detective earns a good salary for keeping a millionaire playboy out of trouble. He tries to keep the drunken middle-aged man out of bad publicity. However, he is too late to avert a disaster when the newly-married man drunkenly stumbles into the apartment of the chorus girl who besmirched his name in the papers. The lights go off, a shot is fired, and a man shoves a gun into the drunk’s hand. When the detective arrives moments later, his client is holding the gun confusedly as the chorus girl lies dead on the floor. Seeing the situation as a clear frame up, the detective decides to hide the millionaire until he can find the real murderer. The young bride’s emotional vows to stay with her husband no matter what convinces the detective that she and some gentleman friend planned the frame up so that her husband would go to the chair for murder and she would receive $10 million as his widow! He is convinced that a half-a-dime charm found in the dead girl’s hand is a clue which would reveal the murderer if the other half of the dime could be found. Unfortunately, before he can investigate anything, their hideout is discovered by the police. The millionaire is found guilty of murder and sentenced to death, and the detective is sentenced to a year in prison for concealing him. While he is being brought to jail, the young man sees a personal message in the newspaper about a rendezvous with a long lost husband, signed Half-a-Dime. Convinced that this is a clue in the case, he jumps off the train to evade the policeman who is in charge of him. He is willing to take this risk because the millionaire promised him $100,000 if he could prove him innocent. Unfortunately, he is discovered by a young woman. He is forced to take her hostage and steal her car. Although he dumps her along the way, he comes back to get her to throw off the police. In an attempt to attract someone’s attention, she starts a fire in the car’s back seat, which accomplishes nothing except burning the car to a crisp. As they prepare to camp for the night, they find a newspaper. It confirms the man’s story to the lady, and it also informs him that she is a famous poetess whose absence has been noticed. Now they must hideout together. He wants to leave her so that he can continue his journey, but she is growing strangely fond of him, so she insists upon accompanying him all the way. Could this be the beginnings of romance for this unlikely couple? They don’t have much time to think about their feelings for each other, since it will be a hard and dangerous journey to get to the theater in time to prevent the murder of Half-a-Dime and solve the mystery once and for all! 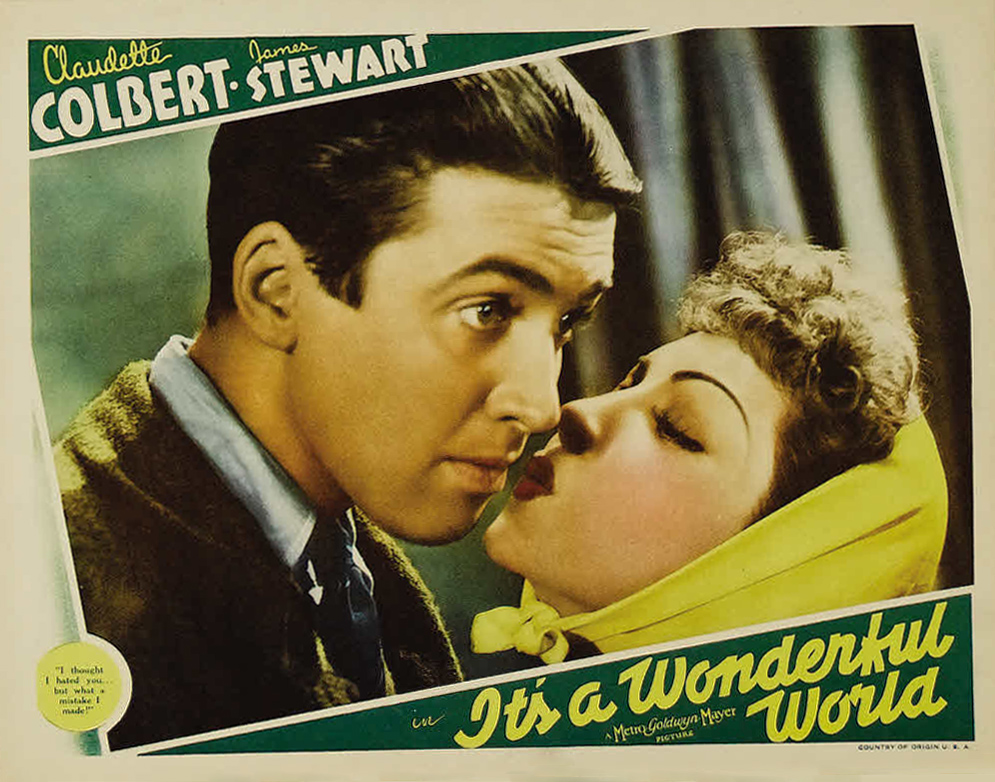 The private detective is Guy Johnson, played by James Stewart. The poetess is Edwina Corday, played by Claudette Colbert. Guy’s business partner and fellow detective is Fred ‘Cap’ Streeter, played by Guy Kibbee. The millionaire who is accused of murder is Willie Heyward, played by Ernest Truex. His young bride is Vivian Tarbel, played by Frances Drake. Her partner in the murder scheme is Al Mallon, played by Sidney Blackmer. The woman who is murdered is Dolores Gonzales, played by Cecilia Callejo. The policeman from whose custody Guy escapes is Sergeant Fred Koretz, played by Nat Pendleton. 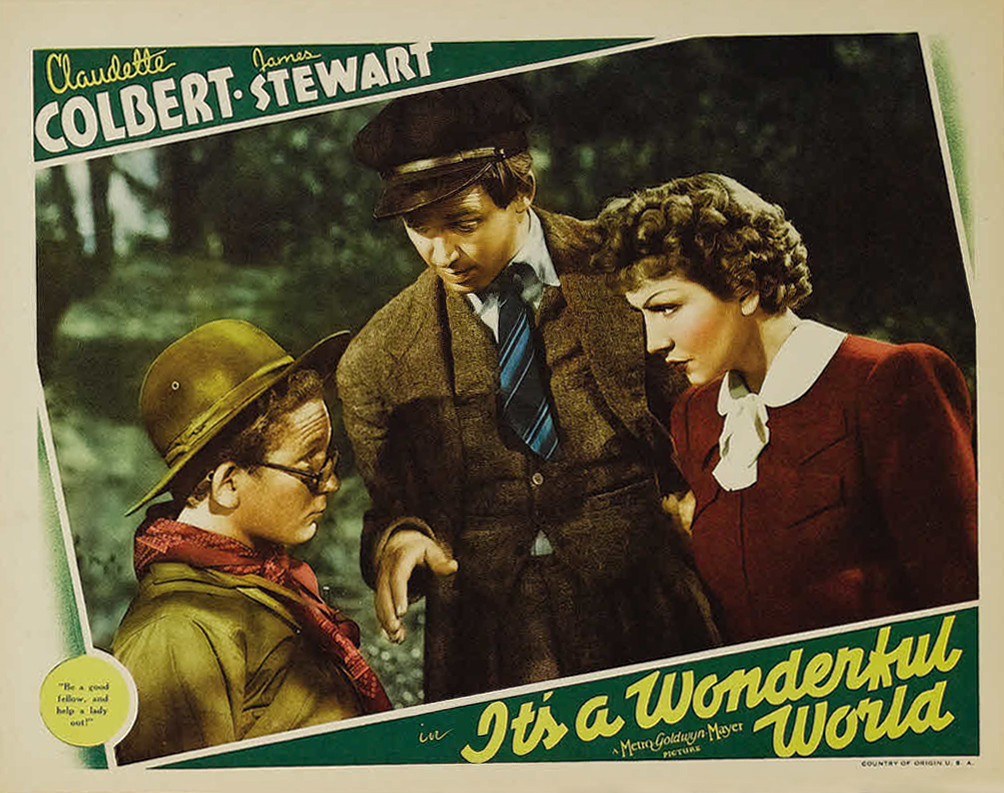 This film was directed by W. S. Van Dyke II. It was produced by Frank Davis. The production company was MGM. The screenplay was written by Ben Hecht, based on an original story by Ben Hencht and Herman J. Mankiewicz. 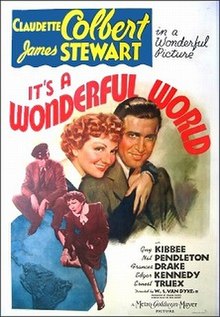 This is a good Code film. It is totally wholesome. There is nothing indecent, objectionable, or suggestive in this movie. The murder is handled without violence, graphic images, or goriness. All the ladies’ costumes are decent. There are no forbidden expressions, and the dialogue contains no suggestive content. Furthermore, the depiction of a man and a woman traveling together is handled with complete propriety. This is a great example of an exciting, funny movie which is appropriate as well as enjoyable for audiences of all ages.

This is an excellent movie. I really enjoyed it. The acting is excellent. The duo of Claudette Colbert and Jimmy Stewart is as wonderful as you would expect the pairing of two such marvelous performers to be. Their chemistry is excellent. Jimmy Stewart is often gruff as the single-minded detective, but you quickly realize that it is mostly a facade. He has to be serious and tough to accomplish his goal. In contrast, Claudette Colbert seems silly and hysterical when she is first kidnapped, but she has true cleverness and deep devotion beneath her surface. I love the way their relationship was written as well as acted. The rest of the cast was great, as well. Standard supporting players like Guy Kibbee, Ernest Truex, and Sidney Blackmer added a lot to this movie, to say nothing of the comic relief from actors like Nat Pendleton. One of my favorite things about this movie is its mixture of suspense and comedy. Unlike Another Thin Man, a movie from the same director and the same year which I reviewed last week, this isn’t really a murder mystery. We as the audience know “who done it” very early on in the film. The rest of the movie shows us Guy’s process of solving the crime and proving the criminal guilty before an innocent man is punished.

I highly recommend this movie. It was very entertaining. It has a great mixture of comedy and drama. The dialogue is very witty. The situations are quite unusual, which makes this film quite unique. The acting is exceptional. This movie reminded me of It Happened One Night at times, what with the unlikely couple traveling together against their wishes. I think this movie is better than the Academy Award-winner starring Miss Colbert, since it is a Code film. One of my favorite jokes was the way Edwina kept swearing by her eyes. It was so random that it was hilarious! I don’t know why this movie isn’t more popular and more frequently acclaimed. It is a masterpiece. When you have a chance, be sure to watch it! It’s a wonderful movie!