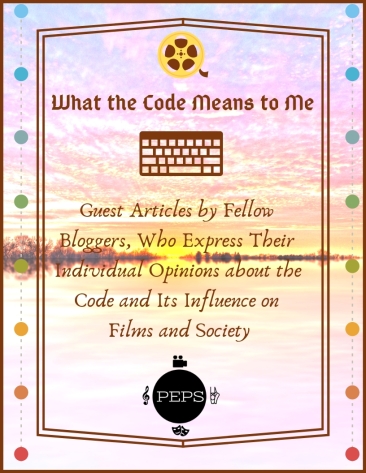 “What the Code Means to Me” is a series which we are launching in 2019. Every month, we are going to feature one article in this series. These articles will be written by other bloggers who are interested in classic films. These articles will be published on the authors’ websites and will including a link to our website and the above banner; I will republish them on our website. These articles may be written by any writer who is interested in participating; they may be published any time during the designated month.

To be an author of an article in this series, you do not have to be in complete agreement with the Code, nor do you have to support it. The purpose of this series is to explore other people’s opinions about and experiences with Code films. However, we do ask that writers focus on positive experiences and ideas, since the purpose of our website is to promote the Code. Nonetheless, we want to have your honest opinions. Perhaps you enjoy the wholesome Disney cartoons made during the Breen Era. Maybe you like the fact that profanity wasn’t allowed. Perhaps you find it refreshing that mature topics were handled without indecency. Maybe you are a religious person who appreciates the Code’s rule against ridicule of religion. You might be a parent who enjoys the fact that Breen Era movies can be enjoyed by the whole family. During my two years in the classic film blogging community, I have met a lot of other writers who love the Golden Era of Hollywood as much as I do. Even if they don’t support or agree with the Code, many of these people have expressed appreciation for some of the Code’s rules. This is the chance for such people to write about this appreciation!

The first people I invited to be authors in this series were the fifteen writers I nominated for the Versatile Blogger Award, as well as my nominator, Sally of 18 Cinema Lane. Several of them have graciously agreed to participate in the series and have chosen their preferred months. However, we still need more participants for the upcoming year. If anyone who reads this is interested in writing an article in this series, please leave a comment and say so! I will be thrilled to feature your article in any available month in 2019 which is convenient for you! If you are interested but others have signed up for the upcoming months, I can schedule you for future available months.

As a reward for participating, all writers who contribute to this series will get to choose the topic for an upcoming Breening Thursday article. Every writer will be asked to suggest two un-Code films, and a PEPS member will breen one of them on the next possible Thursday. Click here for guidelines on which films are eligible for breening.

Here are the articles in the series we have received so far!

The Breen Code and its impact on Hollywood – Original Post

April 2019 – Jenni from Rollamo of Portraits by Jenni

May 2019 – Movie Critic of Movies Meet Their Match

What the Code Means to Me: Breen, Hallmark, and Me – Original Post

November 2019 – Megan Chappie of The Pen and the Cross

The Code – Originally Published on PEPS

What the Code Means to Me – Originally Published on PEPS

A Review of “The Bells of St. Mary’s” (1945) for The 2nd Happy Holidays Blogathon – Originally Published on PEPS

Below is the schedule of writers who have claimed upcoming months for participation in this series:

Currently, one writer has agreed to take place in this series but hasn’t chosen his month yet. We are looking forward to articles from this blogger:

Nuwan Sen of No Nonsense with Nuwan Sen

Thank you so much for joining this series. Please share it to spread the word! We appreciate your support.

24 thoughts on “What the Code Means to Me”