Today is July 8th. A week ago, I wrote my first #CleanMovieMonth article about Three Smart Girls from 1936.#CleanMovieMonth is PEPS’s month-long celebration of clean films from the Breen Code era. A week from today is our debut concert as the L. A. Soprani Sisters, The Story of the Code Through Classical Song at Hollywood and Western. As we are looking forward to this classical event, which is celebrating the 84th anniversary of the formation of the Production Code Administration, we are continuing to celebrate the wonderful films the Code produced. 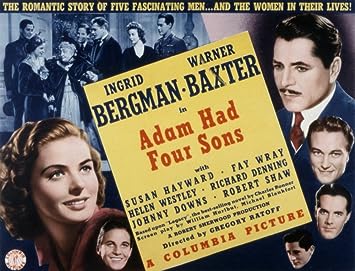 I have written about an assortment of light-hearted romances and dramas during #CleanMovieMonth so far. Today I am writing about another drama, Adam Had Four Sons from 1941. I like to write about dramatic films like this since they show the diversity of the Code era. There was so much more to Breen era films (1934-1954) than Shirley Temple and Andy Hardy. Although these were a charming part of it, there were very mature and intense pictures, as well. For the Favorite Foursome Blogathon, I am going to review just such a picture featuring Ingrid Bergman, Warner Baxter, Susan Hayward, and Fay Wray.

A pretty young French woman, Emilie Gallatin, arrives in Connecticut to be the governess to the four sons of Adam and Molly Stoddard, Jack, David, Chris, and Phillip. She immediately loves the kind family and their beautiful estate. Within minutes, she has won the hearts of the parents and sons alike. Her natural way with the boys makes them adore her, and Mr. and Mrs. Stoddard appreciate her help. It seems that things will always be wonderful for the family, and she promises the youngest son, Phillip, that she will never leave them. However, the sudden, tragic death of Mrs. Stoddard leaves the family in a state of shock. Soon after, the stock market crashes, and Adam Stoddard’s finance business is destroyed. He sadly realizes that he must sell their home and send the three older boys away to school. Emilie wants to stay with Adam and Phillip and care for them even without wages, but Adam insists on sending her back to France. He promises to send for her when times have improved for them. Years pass, and then World War I breaks out. The war pulls the United States out of its financial slump, and Mr. Stoddard’s fortunes return. He sends for Emilie, and she joyfully returns to the family she loves so much. Now, all the boys are young men who are joining the service to aid the war effort. After years apart, Emilie has rejoined her family. However, everyone is surprised when David, now a pilot, comes home with his bride, Hester. Although the Stoddard men are charmed by her, Emilie sees that she is trouble. It soon is apparent that Hester is a flirt who has a wandering eye but will do anything to stay in the Stoddard family. However, her vicious lust for Jack may destroy the family which has graciously welcomed her. Will Emilie be able to keep the family together despite the war and Hester’s scheming? Will Hester divide the loyal Stoddard brothers? Will Emilie ever be able to convince the others about Hester’s true nature? Watch the movie to find out!

This film is an excellent depiction of life in the early 20th century. It charmingly depicts the years before and during the Great War. As the second World War raged in Europe in 1941, this film was very appropriate. Although the United States had not yet joined the fight against Nazi Germany, our thoughts were turned toward that direction. This is a wonderful tale of family love, patriotism, loyalty, and honor, filled with excellent scripting and wonderful acting. It may be a little difficult to watch at times due to its intensity, but it is something that can be appreciated by anyone.

This is a perfect Code film. Like Rebecca, one of the other films I have reviewed during #CleanMovieMonth, it is not only perfect because it is free from reasonable objections. It is special because of its careful and discreet handling of difficult subjects. Hester is one of the most brazen Jezebels you can find in Code films. She is unashamedly flirtatious. However, the situation is depicted so correctly that one cannot help but loathe the woman. Thus, there is no chance of sympathy being thrown away from the side of morality. In addition, everything is very delicate. There is no doubt about the fact that Hester is a loose woman. However, nothing indecent is ever shown or even implied. It is understood, but in a proper way. This is the way to make good films. This is such a powerful movie, yet it is a family film. This is the magic of the Code. If you have a chance, be sure to watch this movie. It offers not only excellent acting from some exceptional actors, including a young Ingrid Bergman, but an exciting, moving storyline. 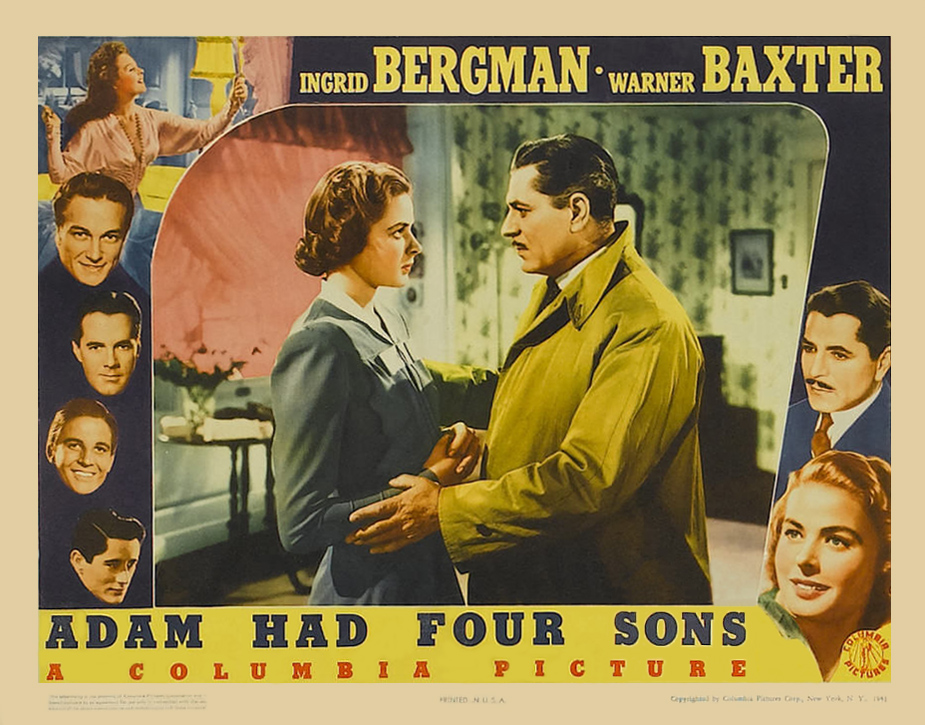 This movie is the story of the Stoddard family. As the title implies, it centers around Adam and his four sons. Thus, the four Stoddard boys are a close, powerful foursome. From childhood to manhood, they are brothers who enjoy working together and playing together. They are one big, happy family, and they greatly enjoy each other’s company. As children, the three older boys always do things together, whether it be playing in the automobile or throwing a basketball. However, young Phillip refuses to be told he is too young and left out. He insists on being part of the group and completing the foursome!

The relationship these brothers have is a wonderful example of a strong, old-fashioned family. These boys are not unruly. They are energetic and enthusiastic, yet they are young gentlemen. Because they have a well-organized and loving family, the Stoddards have no trouble controlling their boys. They are not a chore; they are a joy. After Mrs. Stoddard’s death, Emilie tells Adam that his life will now be his boys. They are his legacy, and they will fill his life. They are a fine legacy, and they do just that.

I think Jack, David, Chris, and Phillip Stoddard make one of the finest film foursomes I have ever seen. You would have to look far to find four more loving, polite, courageous, and loyal brothers. They are a fine example to young men in these days or any other time. Don’t miss this fine family foursome in a fantastic Code film!