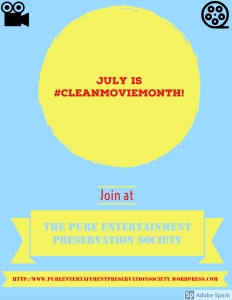 Today is Monday, the ninth day in #CleanMovieMonth. This is the beginning of the second week in this month-long celebration of movies from the Golden Era of Hollywood, 1934-1954, when Joseph I. Breen enforced the Code. To celebrate #CleanMovieMonth, I am watching only Code films and praising their decency daily. I am also encouraging others to do the same. Click on the highlighted hashtag to learn more about this celebration and join yourself! 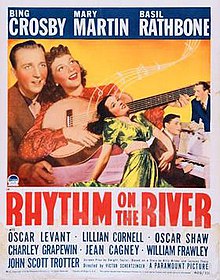 Today I am going to review Rhythm on the River, a merry musical from 1940. So far, I have written about four musicals, but they were all classical. I have reviewed Three Smart Girls from Universal and Let Freedom Ring, The Chocolate Soldier, and New Moon from MGM. Today’s selection, which was made by Paramount, is the first popular musical I have reviewed during #CleanMovieMonth. Bing Crosby and Mary Martin croon an assortment of lively tunes in this musical romance about song writers and the price of ethics.

Oliver Courtney is one of the top songwriters in Tin Pan Alley. He is acclaimed for his brilliant melodies and witty lyrics. Little do his adoring fans and eager business associates know that his lyrics and music are being supplied by two ghost writers. Bob Sommers has been supplying his melodies for about a year. He is a happy-go-lucky fellow who naturally writes tunes and enjoys getting some money for it. He doesn’t mind keeping his authorship a secret, since he doesn’t want success. He just wants to stay at his uncle’s inn, Nobody’s Inn, and have a good time. All he wants out of life is to build his own cat boat and float around on it. Thus, the arrangement works very well for both men. However, Mr. Courtney is thrown into a state of turmoil when his lyricist dies. He is working on the score for a play, and he can’t write his own lyrics. His gloomy assistant, Starbuck, offers plenty of sarcastic quips but little help. One day, Starbuck reminds Mr. Courtney of a girl who sent him a Christmas card with a clever poem on it. He sends for her, and she turns out to be Cherry Lane, a pretty singer who has always dreamed of writing lyrics to go with Oliver Courtney’s melodies. At first she is unsure about being a ghost writer, but the large salary he offers induces her. When a lively jazz band moves into the room next to hers, she can’t put two words together. Mr. Courtney suggests that she go to a remote inn which advertises “peace.” Little does he know that the card he gave her was left by Bob Sommers, who was trying to advertise his uncle’s inn. Cherry goes to Nobody’s Inn and meets Bob. At first, she thinks that Bob’s carefree notions on life are quite shiftless. She loves a man with ambition. Bear in mind, neither ghost writer knows that the other exists. Bob thinks that Courtney writes the lyrics, and Cherry thinks that Courtney writes the melodies. On the first evening, Cherry hears Bob playing a beautiful melody he has written. She goes out to see him, saying that it inspired her to write words for it. She apologizes for calling him shiftless, since she sees how talented he is. Before they know it, they have fallen in love. However, a big secret remains between them. Can a ghost win his girl with tunes that he can’t claim as his own? Will Bob and Cherry be able to make successes of themselves? Will Oliver Courtney continue getting glory for the young hopefuls’ ideas? Watch the movie to find out!

Bob Sommers is played by Bing Crosby. Cherry Lane is played by Mary Martin. Oliver Courtney is played by Basil Rathbone. Starbuck is played by Oscar Levant. Bob’s uncle is played by Charley Grapewin. The noisy jazz band is Wingy Manone’s band. In case the name Jean Cagney on the cover makes you curious, Miss Cagney is related to the famous gangster star of Warner Bros. The young lady who has a brief role in the opening scene of this film was James Cagney’s younger sister.

As one would expect from a movie called Rhythm on the River, there are a lot of great tunes in this movie. The songs that are supposed to have been written by Bob and Cherry were written by James Monaco and Johnny Burke. The catchy tunes include “What Would Shakespeare Have Said?” “That’s For Me,” “Only Forever,” “When the Moon Comes Over Madison Square,” “Rhythm on the River,” and “Ain’t It a Shame About Mame.” These tunes are divided between Mr. Crosby and Miss Martin, and some of them are duets. In the titular song, Bing sings and swings in a pawn shop with Wingy Manone and his band. As the musicians play the instruments which they have just gotten out of hock, Bing croons and does a drum solo on a drum set and various items throughout the store. You can tell by his technique that he knows what he’s doing. As a matter of fact, before he was a singer, he was a drummer in a band. He got his start in a trio with Wingy Manone in the late 1920s. That’s why Wingy was in so many of Bing’s films.

The music in this film isn’t classical, and Bing’s singing can’t compare to Nelson Eddy’s. However, it’s great in another way. Bing Crosby was one of the finest jazz singers, and I always love to hear him sing. He and Mary serve up some delightful songs in this celebration of songwriting. Hours after the film ends, you’ll find yourself humming the catchy tunes from this movie!

This is a good Code film. It’s clean, decent, and wholesome. Like The Cowboy and the Lady, the third film I reviewed during this month, it doesn’t have anything extra to make it a perfect Code film. However, that doesn’t mean that it isn’t a marvelous example of the PCA’s work during the Golden Era. There aren’t any difficult topics or special qualities. It’s just a good, clean, fun movie which is completely free from objection. It has that nice, wholesome quality which you just don’t find in any era of film beside the Breen era. The script is very witty. Interestingly, one of this film’s screenplay writers was Billy Wilder. This shows his wittiness and cleverness during the Breen era. He didn’t have to be risqué to be funny. He was at his most amusing when he had guidelines and restrictions. Oscar Levant’s dialogue has some of the funniest lines I have ever heard. I can’t think of anyone who couldn’t enjoy this movie. It’s great for anyone!

Be sure to come back tomorrow for another review of a great Code film! What clean movies have you been watching during July?