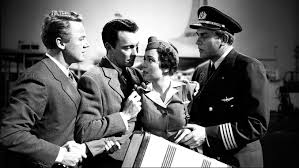 The first Mike she meets is Captain Mike Jamison, the airline pilot on her first American Airlines flight. He is played by Howard Keel. They have a turbulent start when she tells him that pilots are only chauffeurs, not yet knowing that he is a pilot. When she forgets the lunches for the passengers on the first flight, he thinks none too well of the energetic girl from Illinois. However, during their months flying together, they grow very fond of each other. They learn that they both love flying, traveling, and meeting new people. Neither feels alive unless he is in the air.

The second Mike she meets is Mike Lawrence, a graduate research scientist who makes his living as a bartender. He is played by Van Johnson. He meets Marcy on one of her flights, and she immediately thinks he is a VIP. They immediately like each other, that is, once he stops reading his book and pays attention. When she learns about his scientific goals, she says that he is a VIP. She admires his desire to help people and to be a teacher. Her mother was a teacher, so she knows that college life is terribly exciting and important.

The third Mike she meets is Mike Tracy, an advertising executive who thinks of big ideas for big companies. He is played by Barry Sullivan. He meets Marcy when she and her friend are driving around the Los Angeles suburbs, and their car breaks down. Thinking he is a gardener, they ask him to give them a push. When he and Marcy meet in Chicago, he asks her to go to dinner with him, a client, and the client’s wife, since his date is ill. She goes, and they have immediate chemistry. He thinks she is a remarkable girl, since she is full of ideas but also wants to be a wife and mother. They both love thinking of ideas and seeing them come to life. 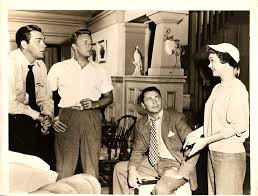 The three Mikes meet for the first time in California. Marcy has been transferred there, and so has Mike Jamison. The other two Mikes already live there. As she is moving into her new house, all three men arrive to help her. They immediately dislike each other’s presence, since each wanted to be her hero. However, when she calls Mike for the first time, and all three respond, they know they have a problem. As the three men walk into the house, scowling at each other, each Mike wants to be the only Mike in her life. They are a comical trio. They try to be civil to each other, but they are obviously jealous. Marcy manages them well, giving each man a job. They are not so pleased. They grunt in response to her orders and requests. She soon realizes that three Mikes is two too many, so she works out a naming system for them. Mike Jamison will be Michael, Mike Lawrence will be Mike, and Mike Tracy will be Mickey. Mike Lawrence is the only one who is really pleased by this situation.

As I said, the three Mikes are usually cordial or at least civil to each other. In only one scene do they have a chance to unleash their true aggression toward each other. Marcy is the Gardenia Soap girl, so she has been posing for several photographs. During a party, though, she is called for a late night photography session with a drunken photographer whom Mike Tracy wouldn’t trust “with Whistler’s mother.” When the three Mikes learn about this, they hurry to his apartment to rescue her. She is keeping the tipsy ladies’ man at bay, but her beaux thing the worst when they see her posing in a sarong. Each punches the photographer, but soon they start to fight with each other. In no time, the Hollywood studio is filled with a brawl of three angry Mikes fighting for one Marcy.

This threesome is one which provides a difficult choice for Marcy. Which Mike should she marry? Mike Jamison offers adventure, Mike Lawrence offers sincerity, and Mike Tracy offers cosmopolitan excitement. Should she choose a man with courage, a man with character, or a man with ideas? I think I would choose Mike Lawrence because of his sweet personality and genuine sincerity. Of course, I have also given some thought to Benson, Captain Jamison’s copilot, who seems like a pleasant young man. However, he is not one of the options, so I will keep my choice of Mike Lawrence. Ladies, whom would you choose? If you want to know whom Marcy chooses, watch the movie! This is clean, wholesome, Code fun which anyone can enjoy. Plus, it offers an interesting look at aviation in the 1950s. Don’t wait to see this film!