This article is part of the En Pointe: The Ballet Blogathon: https://christinawehner.wordpress.com/2017/05/10/announcing-en-pointe-the-ballet-blogathon/

Hans Christian Andersen from 1952 begins with the declaration that it is not a biography of the famous author named in the title; rather, it is a story about a great storyteller. This whimsical fiction portrays Hans as a fun-loving, story-telling cobbler played by Danny Kaye.

The story begins in the little town of Odense, Denmark, where Hans is the local cobbler and well-meaning troublemaker. He tells stories to the children, and they prefer them to their lessons. The schoolmaster does not share their appreciation for the cobbler’s talents. He persuades the town council to force Hans to leave. Hans’s worrying apprentice, an orphan boy named Peter, accompanies him to Copenhagen, where they plan to establish their new business. However, they start unfortunately when Hans gets arrested for ignorantly advertising on the king’s statue. Peter gets away, and he soon hears the choreographer of the Royal Danish Ballet demand to be brought a good cobbler. Peter persuades the company to bail Hans out of jail so that he can make special point shoes for the prima ballerina, Doro, who is difficult to please. When Hans sees the beautiful ballerina, he falls madly in love with her. He is very troubled by the way the harsh choreographer, Niels, treats her. He soon learns that she is married to Niels, but this only intensifies his affection and sympathy for her.

Hans’s amazing talents as a cobbler enable him to make magnificent toe shoes for Doro. He is the only person who can make the shoes she demands. His admiration for her spurs him to make the most comfortable, light, and beautiful toe shoes ever seen; she feels like she is dancing on air when she wears them. Out of his love, however, more than toe shoes flow. With the beautiful Doro as inspiration, Hans writes a story called The Little Mermaid. He writes it for her to show her his love. One morning, Peter is reading it while Hans sleeps, and the wind blows the papers out of his hands and to Doro’s window. Peter is unable to retrieve the story, but Hans is not angry. He romantically thinks that the wind brought the story to her. Doro loves the story, and the ballet company decides to produce The Little Mermaid as a ballet. Will Hans persuade Doro to leave her cruel husband and marry him, or will Hans realize that Doro and Niels really love each other? 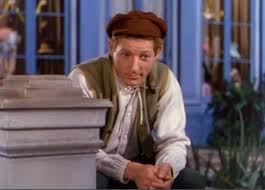 This is a wholesome, family film which anyone should enjoy. There are some very tender moments with Hans and various children, including the village children in Odense, a lonely little girl outside Hans’s jail window, and a sickly little boy who is teased because he has no hair. Hans has a kind word and a story for every child he meets. He doesn’t just tell his stories, though; he usually sings them. Frank Loesser’s words and music make Hans Christian Andersen’s old stories come to life all over again. Danny Kaye sings the sweet, simple songs with sincerity. He is very funny in many parts of the movie, but he is also earnest and serious at times. This is true of the whole movie. Excellent tension is created by Farley Grainger, who plays Neils. This picture whimsically includes some of Hans Christian Andersen’s most famous stories as it weaves its own story. This is a true Code film. Although Hans thinks he loves a married woman, he is always a gentleman. There is never any impropriety or any thought of infidelity. Why not have a family film which includes real problems while entertaining?

This movie has a unique, fascinating focus on ballet. Jeanmarie, the famous French ballerina, plays Doro with beautiful talent. Her casting in this role allows for some excellent ballet dancing to be included. Several dance numbers are shown, including many interesting ballet rehearsals. There are two balletic climaxes in this film. One is Hans’s dream sequence, in which he is searching for Doro, whom he finds being mercilessly worked by her husband; he fights Niels and defeats him, winning Doro. The second is the actual production of The Little Mermaid, which is the whole story in condensed form. There are many real ballet dancers in this movie, who add authenticity to the ballet scenes. The costumes are detailed and lovely, and the choreography is exciting. Anyone who enjoys ballet will appreciate the large amount of real ballet in this movie. Another interesting element is the toe shoes Hans makes for Doro; he constructs a rainbow of beautiful dancing slippers.

I would like to thank the choreographers of this production, Christina and Michaela, who so graciously allowed me to do a solo in their En pointe blogathon. This was an excellent subject for a blogathon. I hope everyone who reads this will watch this musical, balletic Code film from 1952 very soon. The Code years were a time when Hollywood loved to include the fine arts with the largest form of entertainment, movies! How can we do this again? Look at the next line to find the answer.

7 thoughts on “Hans Christian Andersen: A Teller of Stories and Maker of Point Shoes”