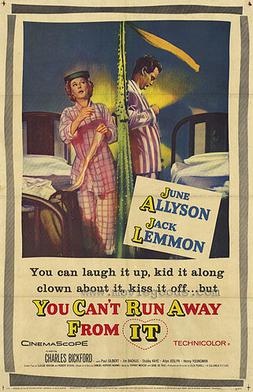 It is Thursday again, and this is the week for a Breening Thursday article. I am going to breen an early Shurlock film this week, You Can’t Run Away from It from 1956 with Jack Lemmon and June Allyson. I chose this film in honor of the fact that I will be in Tucson, Arizona, when this is published. I have always loved this film, which happens to be the musical remake of a late pre-Code film, the famous It Happened One Night from 1934 with Clark Gable and Claudette Colbert. This film is exquisitely clean for 1956; in fact, there is nothing that is actually dirty about it. It is much more Code-compliant than the original, as it should be, since it does display the Seal during the opening credits. Although my breenings this week will probably seem like extreme nitpicking, decay starts in small ways, so I will describe how the few problems could have been removed or changed.

Ellie Andrews has married a fortune-hunting sportsman, Jacques Ballarino, who marries one bride a year to maintain his fancy lifestyle. Her father, a wealthy Texas cattleman, kidnapped her right after the wedding and plans to have her marriage annulled. When his yacht is in the San Diego harbor, she jumps ship and swims to shore. To escape her father’s detectives, she takes a bus toward Houston, where her husband is waiting for her. On the bus, she meets an impetuous reporter, Peter Warne, who is also heading back to Houston. When he realizes who she is, he decides to help her get to her husband in exchange for an exclusive story about her “mad flight to happiness.” Although they fight at first, they grow very fond of each other during the trip. When they are only a few hours from Houston, they are spending the night in a hotel. Ellie tells Peter that she loves him, but he tells her to go back to her side of the room, so she thinks he despises her. Once she is asleep, he decides to drive to Houston and sell the story to his editor for $2000 so he can propose to her. When she awakes in the middle of the night to find him gone, she thinks he has left her, so she calls her father, who has consented to the marriage. Back in Houston, she and Jacques prepare for an elaborate wedding to supplement their civil ceremony in Acapulco, but she is miserable. When Peter arrives to cover the wedding and be financially reimbursed by her father, she learns that he loves her and didn’t even want the $20,000 reward. She runs out of the wedding ceremony and hurries to Peter’s car as he leaves. They get married after her annulment to Ballarino is finalized.

This film contains very few problems with dialogue, no problems with costumes, and only one problem with content. I will begin with dialogue. The first problem in this category occurs in the lyrics of the song “Howdy, Friends and Neighbors.” A friendly sailor sings it on the Tucson-bound bus, and all the passengers join in. Some of the passengers sing solo verses. One of them is a funny old maid, who sings the following lyric: “I know all the parlor tricks in case you get riled. We can play strip poker, friends, with everything wild!” The italicized lyrics must be changed, since the Code permits no mention of strip poker. Later in the song, the sailor sings the following lyric: “We’ll go honky-tonk until they call out the cops.” Originally, honky-tonks were saloons in the Old West which were noted for being disreputable, so I think it is best to eliminate this lyric.

When Peter is sending a telegram to Joe Gordon, his editor back in Houston, the girl at the telegram office is reading the telegram aloud. While reading it, she is not sure what Peter wrote. “You big tub of…” “Lard,” Peter replies. “Lar?” she asks, not pronouncing the d. “Lar-d,” Peter says, exaggerating the d. “Lar-d,” she repeats. Tub of lard is a rather derogatory term for a fat person; this line is rather silly because Joe is not fat. Perhaps he means it in the greasy sense. Anyway, I don’t think Mr. Breen would have allowed that line because it was considered vulgar slang.

On the bus, Ellie has the misfortune of sitting next to a loudmouth hep cat named George Shapely. After introducing himself, he says, “That’s how I like them. Real George and shapely.” That’s alright. George meant gorgeous, and shapely meant pleasantly formed. His next line, however, is very suggestive if you listen to it closely. “You must have been up front when they passed out that crazy equipment. And I’m just the guy that digs it the very most.” He speaks so quickly, you can almost miss the true meaning of that phrase. However, it is obvious that he is rather vulgarly referring to her figure as equipment. This whole phrase must be removed. The rest of his dialogue is hilarious and acceptable.

Later, Peter and Ellie spend the night in a hotel room. Since they cannot afford separate rooms, Peter erects a cord and blanket between the twin beds and calls it the walls of Jericho. If you have seen It Happened One Night, you will remember this scene. I have no objections to this. I think it is a very proper arrangement. The next morning, detectives looking for Miss Andrews pay them a visit. Peter disguises Ellie by putting a towel on her head and telling her to “look lousy.” The italicized word is forbidden under the Code, since it was considered quite vulgar. This word is said four times in this picture, three times by Peter and once by Ellie. Each time it should be changed to something like rotten, crummy, or just plain bad.

In the second hotel in which they stay, the innkeeper’s wife is very suspicious of them. Unlike her husband, she doesn’t believe Peter’s claim that they will pay later since they are staying  a week. In the middle of the night, the wife wakes up the innkeeper and says that they have gone. The truth is that Peter has driven to Houston and intends to return. However, the innkeeper’s wife sees that the car is gone and thinks that they have left. She says, “Oh, and we never would have known a thing about it until morning if I hadn’t et them cucumbers.” She is obviously referring to the digestive disturbance which can be caused by cucumbers. In the twenty-first century, we have been conditioned to not mind discussion of such things, but it was formerly considered inappropriate to discuss these topics. I think we should cut out this line. Why she was awake in the middle of the night doesn’t matter.

The only problem in content is the fact that Ellie must get an annulment from Ballarino to marry Peter. It is not clearly stated in the Code that divorce and remarriage are forbidden, but it is stated that the sanctity of marriage must be upheld. Besides, when the Code was written, divorce and remarriage were considered to be terrible sins by the Catholic Church. Thus, I use the general rule that the leading characters should not engage in divorce and remarriage. The problem in this film can be fixed very simply. Thrill of a Romance from 1951 gave me this idea. In this film as in You Can’t Run Away From It, the leading lady is married then separated from her husband immediately after the wedding. Thus, they are married in name only. She falls in love with another young man. When her husband returns and accuses her of infidelity, they decide to get an annulment. When he calls his lawyer, he finds out that he is not technically divorced from his last wife; thus, this new marriage is illegitimate. This makes sensitive people such as myself and Mr. Breen pleased with the ending. We can use the same situation in You Can’t Run Away From It with fine results. It has been stated that Ballarino has been married and divorced several times. It is quite probable that the divorce from his last wife could not be finalized yet. As a matter of fact, the grand wedding which they almost have in her father’s house makes more sense then. After Ellie returns to Houston, it could be discovered that their marriage was not legitimate, since his divorce was not finalized. Now that he is really divorced, they could get married “in real Texas style.” Thus, when she runs out of the wedding, she is truly unmarried. No annulment is necessary.

I hope you enjoyed my breening of this wonderful film. It is one of my favorite pictures with Jack Lemmon and June Allyson. I recommend that you watch it soon. It is available for online purchase on Amazon and Barnes and Noble. The main purpose of these articles is to make you aware of the process which the Production Code Administration used to create the Golden Era of clean entertainment. As you read my articles, I hope that you will begin to think like a self-regulator and notice the Code-breaking and Seal-worthy elements in every film you watch. Please show your support by liking this article and leaving a comment.

Ellen Andrews: A millionaire’s daughter who runs away from her father when he threatens to have her marriage annulled; played by June Allyson.

Peter Warne: The down-on-his-luck reporter who helps Ellie get back to her husband in Houston; played by Jack Lemmon.

Mr. Andrews: Ellie’s stern but loving father who is interested in her happiness above all; played by Charles Bickford.

Jacques Ballarino: The philandering sportsman who has married Ellie for her father’s money; played by Jacques Scott.

Fred Toten: A friendly sailor on shore leave who takes a bus back to his Texas home and makes everyone on the bus be friends; played by Stubby Kaye.

George Shapely: A masher on the bus who uses irritating bop talk and an infuriating laugh as he flirts with Ellie; played by Paul Gilbert.

Joe Gordon: The editor of Pete’s newspaper in Houston; played by Allyn Joslyn.

Vernon, Second Proprietor: The henpecked owner of the second hotel at which Ellie and Peter stay; played by Howard McNear.