This article was written by Sally Silverscreen of 18 Cinema Lane. Her analysis of Breen Era films, their differences from modern movies, and their similarity to current Hallmark films in terms of decency is the June entry in our guest series, What the Code Means to Me. It was originally published on her website here. Sally, thank you for contributing the fourth article to our series exploring exploring other writers’ opinions on the Code!

Dumbo (2019). Men in Black International. Poms. Dark Phoenix. These are a few examples of movies that have, recently, lost their battles in the Cinematic Colosseum. When a film underperforms or doesn’t reach expectations, people always look for reasons why this happened. It is a way of providing a sense of closure to the situation. Some say that the reason why 2019 has seen more cinematic failures than successes is because of an absence of original and innovative ideas. Others say that the creative teams behind these projects put more emphasis on politics than the story itself. Another reason that has been discussed is having too many remakes, sequels, and franchise continuations competing against each other within a short amount of time. Whatever the reason, I think we can all agree that these films probably failed because, simply, movie-goers just weren’t interested in the overall product. This seems very different from the time-period of 1934 to 1954, when the Breen era not only existed, but also thrived. During this particular stretch of time, it feels like more films were both successful and memorable for the right reasons. Take 1939, for example. Within this year alone, movie-goers were given three films that cemented their place in cinematic history; Gone with the Wind, Mr. Smith Goes to Washington, and The Wizard of Oz. The fact that these very distinct films placed in the Top 10 at that year’s box office proves that during the Breen era, there was something for everyone at the cinema. With the Breen Code absent in today’s cinematic world, an interesting media company that, I feel, has embraced Joseph I. Breen’s way of thinking is Hallmark. The more I’ve thought about the Breen Code and its impact on film, the more I see the similarities within the kinds of movies that Hallmark creates. Even though these films are featured on either television or digital services, it proves that there is hope for the Breen Code to make a comeback.

Before discovering the blog, Pure Entertainment Preservation Society, I had never known about Joseph I. Breen and the Breen Code. In fact, I had always believed that the MPAA (the Motion Picture Association of America) was the “end all, be all” when it came to judging a film’s content. It wasn’t until I watched the video, “Why You Shouldn’t Listen to the MPAA (Podcast Excerpt)” from the Youtube channel, Rachel’s Reviews, that I started to change my views about this particular rating system. In this video, Rachel and her friend, Conrado, talk about why movie-goers should form their own self-censorship than solely rely on the MPAA. When I came across Pure Entertainment Preservation Society last October, while looking for upcoming blogathons to participate in, I was introduced to who Joseph I. Breen was as well as the Breen Code itself. In preparation for this article, I read as much as I could about Joseph and his Code. Tiffany and Rebekah Brannan, the creators of Pure Entertainment Preservation Society, have done a wonderful job at educating their readers and followers about the Breen Code and advocating its return to entertainment. Their articles are very informative and interesting to read. After learning all of this information, I feel that a newer and stronger code for judging a film’s content needs to be put in place. While having the MPAA is better than having nothing at all, its rules and guidelines seem to be more on the relaxed side. In the previously mentioned video, Rachel and Conrado discuss some of the ways that a film receives a particular rating. One example is the use of blood within the film’s context. Rachel brings up the example of The Hunger Games receiving a PG-13 rating due to the absence of blood while “contestants” are dying during the event within the story. She feels that because blood isn’t shown during these moments, the film is “dehumanizing the situation”. Had The Hunger Games been created during a time when something similar to the Breen Code existed, either this film would have never seen the light of day or the “contestants” would have died off-screen.

The movies and shows from Hallmark make up a large percentage of the content on my blog. Sometimes, I review films from Hallmark Channel, Hallmark Movies & Mysteries, and Hallmark Hall of Fame. In some of my Word on the Street posts, I’ve talked about movie news related to upcoming Hallmark projects. I also conduct two re-cap series for When Calls the Heart and Chesapeake Shores. Hallmark has created a reputation as being a family-friendly company in both appearance and content. As I mentioned in the introduction, things within the Breen Code sound like the type of material that Hallmark creates and distributes on their networks. Within the Hallmark entertainment spectrum, there are three television networks that air movies; Hallmark Channel, Hallmark Movies & Mysteries, and Hallmark Drama. Each network has their own unique and consistent tone, while still maintaining the company’s created image. Hallmark Channel features films that primarily contain light-hearted, romance stories. However, the relationships featured in these movies are wholesome. In the Breen Code, it states that “pictures shall not infer that low forms of sex relationship are the accepted or common thing”. Typical Hallmark Channel films do not feature or talk about sex. The only two films that I can think of that either mention sex or imply that a couple was having sex are A Family Thanksgiving and Audrey’s Rain. Hallmark Movies & Mysteries has a darker tone than Hallmark Channel, as the majority of the network’s content is mystery related. The type of mystery that is common in these movies is the murder mystery. However, this aspect of the story is always handled in a very tasteful way. Not only is a small amount of violence shown, but a limited amount of blood is featured on-screen. The Breen Code contains a whole section about featuring murder in film. One of the points in this section says that “methods of crime should not be explicitly presented”. Sometimes, these films show how a victim is murdered. This is included to introduce the mystery and present the seriousness of the situation. Toward the end of the movie, the guilty party reveals how and why they committed the crime. But the guilty party is never “presented in such a way as to throw sympathy with the crime”. Even though Hallmark Drama has only been around for two years, it has been a network where Hallmark’s more dramatic films can be seen. These types of films are either from Hallmark Hall of Fame or from Hallmark Channel and Hallmark Movies & Mysteries that haven’t be aired in recent years. Some of these projects were created before Hallmark embraced the image they have today, even before the Hallmark Channel was introduced back in 2001. One of these films is Ellen Foster, which is a Hallmark Hall of Fame movie that was released in 1997. In this film, there is one scene where Ellen is being physically abused by her father. If this exact same movie were released by Hallmark today, that scene would never have been featured in the film. The subject of child abuse would have only been implied through the use of dialogue and subtle visual references. This suggestion would fit with the Breen Code and Hallmark’s current image, as the Code itself states that “excessive and inhuman acts of cruelty and brutality shall not be presented. This includes all detailed and protracted presentation of physical violence, torture, and abuse”. Despite this aforementioned detail, Hallmark Drama still features content that is family oriented.

The previous paragraph contains some examples of how the Breen Code can be found within Hallmark’s movies. I could provide more examples, but that would mean this article would be longer than it already is. Hallmark’s commitment to providing family friendly content to their audience shows that the Breen Code, or some form of it, can return to the entertainment world. It will most likely happen in a process of events rather than a quick succession. However, this is proof that Joseph I. Breen’s intentions still have a place in our world. In the article, “The Production Code of 1930’s Impact on America” from Pure Entertainment Preservation Society, it was said that “films are merely rated but not censored”. Since this is the case, we, the movie-goers, need to take the initiative to discover a film’s content, understand why a rating was given to a particular film, and form our own choice to view or not view a film. Until the day when Joseph I. Breen’s dream can come true again, this is the only option that movie-goers currently have.

For my two Breening Thursday suggestions, I would like to recommend Wild Oranges and The Trouble with Angels. Wild Oranges is a silent film from 1924 that I reviewed when I received 95 followers on my blog. The Trouble with Angels is one of the films that I reviewed during the Rosalind Russell blogathon earlier this month. It was released in 1966.

If you want to check out the references I mentioned in this editorial, you can type “Why You Shouldn’t Listen to the MPAA (Podcast Excerpt)”  into Youtube’s search bar or visit Rachel’s Youtube channel, Rachel’s Reviews. You can also visit these links: 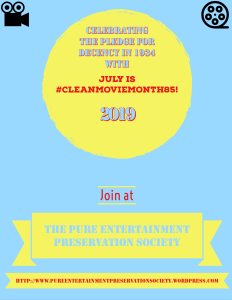