Often we’d secretly like to do the very things we discipline ourselves against. Isn’t that true? Well, here in the movies I can be as mean, as wicked as I want to – and all without hurting anybody. Look at that lovely girl I’ve just shot! – Claude Rains

See the complete roster of this blogathon here.

When you hear the name Claude Rains, what comes to your mind? A famous voice, a chilling laugh, a pair of slightly wandering but piercing eyes, a thick head of curly brown hair? Whatever this famous name means to you, be sure to read on and see how I, Rebekah Brannan from the Pure Entertainment Preservation Society (PEPS), am honoring this wonderful actor of the Golden Era on his 129th birthday!

On November 9-11, the three days surrounding Claude Rains’s birthday, PEPS will be hosting a blogathon to celebrate this brilliant star of the Silver Cinema. We acknowledge that the day following his birthday is Veteran’s Day, which celebrates the end of World War I, and we consider this very apropos, since he served dutifully in the Great War, sustaining permanent injury to his eyes and vocal chords due to a gas attack. We respectfully submit this blogathon as an honor to this man as both a great actor and a heroic soldier.

Here are the banners for the “Claude Rains Blogathon,” all of which feature a photograph from a film in which Mr. Rains played the title character. Please select one and include it in your article. Please use these banners to advertise the blogathon on your website! 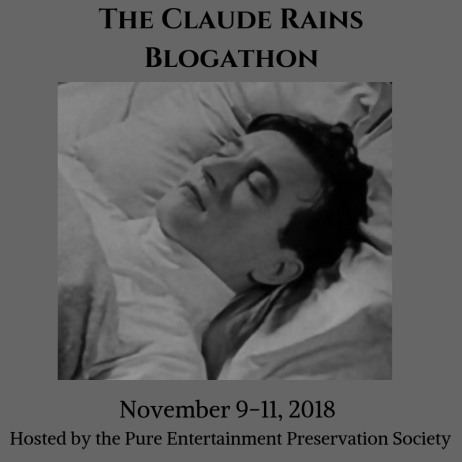 This banner features the last shot from Claude Rains’s first film, The Invisible Man (1933); this is the only shot in the entire film where he is seen.

This banner features a shot from the film Here Comes Mr. Jordan (1941); it is from the scene in which the angel, Mr. Jordan (Claude Rains), tells Joe Pendleton (Robert Montgomery) that he must leave the body of Bruce Farnsworth. 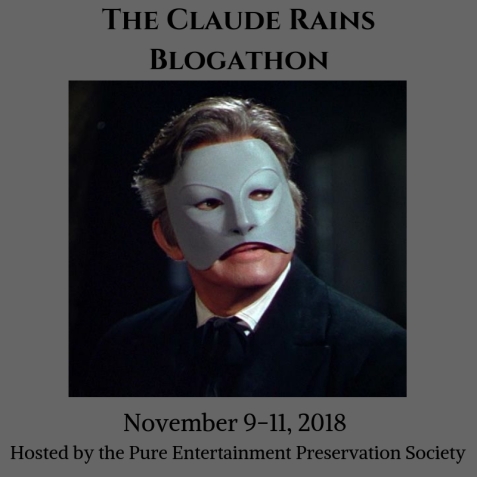 This banner features a shot from the film Phantom of the Opera (1943); it is from the film’s climax, shortly before Christine DuBois (Susanna Foster) removes his mask, revealing his acid-scarred face.

This banner features a shot from Mr. Skeffington (1944); it is from the scene on a ferryboat after Fanny Trellis (Bette Davis) and Job Skeffington (Claude Rains) have gotten married.

This banner features a shot from the British film Caesar and Cleopatra (1945); in this scene, Caesar (Claude Rains) prays to a sphynx, shortly before meeting Cleopatra (Vivien Leigh).

Please help us to make this blogathon a success by joining and displaying one of our banners on your website to advertise it! Also, don’t forget to join and advertise the Second Annual Great Breening Blogathon, which is coming up soon, on October 12-17!

54 thoughts on “Five minutes, everybody! The curtain’s going up on the “Claude Rains Blogathon!””