This article is my first entry in “The Third Annual Barrymore Trilogy Blogathon” at In the Good Old Days of Classic Hollywood: https://crystalkalyana.wordpress.com/2017/05/26/announcing-the-third-annual-barrymore-trilogy-blogathon/

Lionel Barrymore was born in 1878 as the eldest son of Maurice and Georgiana Barrymore nee Drew. He was a member of the famous theatrical Barrymore family. I am beginning with an article about him, since he was the oldest of the three Barrymore siblings who famously graced the Silver Screen. I will begin my tribute to Lionel Barrymore’s magnificent film career with a perusal of one of his finest films, Captains Courageous from 1937. 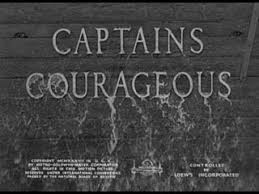 Captain Disko Troop, the captain of a Grand Banks of Newfoundland fishing schooner called We’re Here, is Lionel Barrymore’s character in Captains Courageous. He is one of the courageous captains mentioned in the title.

All he wants is to catch a lot of fish, to have good luck and safe travels on the seas, and to beat his competitor, Captain Walt Cushman of the Jennie Cushman, in the race back to Gloucester, Massachusetts.

The fishing trip becomes more complicated when one of his crew, an excellent Portuguese fisherman named Manuel, catches a rather large, disagreeable fish. This catch is Harvey Cheyne, a spoiled millionaire’s son who fell off the ocean liner on which he and his father were sailing. He demands to be taken to shore immediately, but Captain Troop is not going to risk a whole season of good fishing for the slim promise of a demanding boy that his father will reward them.

Instead, the good captain orders the stubborn brat to work aboard the ship alongside his own son, Dan. Naturally, the aristocratic lad feels he is entirely above such mean tasks as tossing fish heads overboard. The superstitious fishermen say that Harvey, as a passenger, is a Jonah who will bring bad luck to their voyage. The captain tells Manuel to get the boy to work in exchange for food so that he will be a crew member and not a passenger.

Manuel struggles with the headstrong youth, who is positively belligerent in his refusal to work. Eventually, he forces him to toss a fish head overboard and remove the bad luck. Manuel and Harvey begin to work together; in time, Harvey’s animosity turns into deep affection for the wise Portuguese man. Under Captain Disko’s guidance, Manuel turns a pampered, spoiled little boy into a brave, useful young man who knows about courage, honor, and fishing.

As they sail the seas together, Harvey comes to view Manuel as the strong, caring father figure which he has never had in his own father, who loves him but has been too busy with business to spend time with his son.

This picture, which is a screen adaptation of a novel by Rudyard Kipling, is considered a classic, and it deserves such honor. It displays drama, adventure, sentiment, tenderness, and tragedy. Aside from a few maids in the beginning of the picture and Dan’s mother near the end, there are no women in this movie. All the leading roles are male, but I would not say that this is exclusively a man’s picture. Although it is dramatic and adventurous, the Breen seal ensures that there is no gruesomeness or brutality which would be distasteful or offensive to women’s sensibilities. Mr. Breen worked hard to attain the standard that no picture would contain any content which would disgust, repulse, or offend even the daintiest, primmest of females from Maine to Oregon. If Mr. Breen had not overseen this picture, it surely would not have met this standard, since it was the kind which can easily contain gory material. However, the Breen standard kept all repellent situations from repelling anybody.

When Harvey is on the big ship with his father, he and some other boys are drinking chocolate milkshakes. To prove his sturdiness, he brags that he can drink six chocolate milkshakes, but the other boys doubt this. He succeeds, but he looks quite ill after finishing them. When the other lads think that he is going to be sick, they follow him to see. While trying to avoid them, Harvey goes on deck and falls overboard. Although Joe Breen usually did not approve of any reference to emesis, he allowed an implication of impending emesis in this film. It was not comical, nor was it easily removable. It was a serious, necessary element of the plot which was delicately handled. It was not done in a way which would offend anyone, and it only showed the youthful folly of Harvey, who always has to be superior to everyone else.

Other potentially gruesome elements of the story are two occasions when fishermen get hooks stuck in their arms. However, nothing is shown; the audience merely understands that the victims are having the hooks pulled out. Although one might wince at the thought of such a painful situation, there is no gruesomeness, which could be offensive. There are several times when raw fish are shown being cut up. This might make modern viewers cringe, but I know why Mr. Breen allowed it. Many Americans in this age are squeamish about things which were perfectly natural to past generations. Seeing the sailors chop up the fish was no different than seeing the local fishmonger prepare one’s order of fish for Friday dinner.

Manuel is played by Spencer Tracy in a depiction which won him the Academy Award for Best Actor that year. The character is wise, warm, fun-loving, serious, gentle, and considerate, and Mr. Tracy brought all these attributes to vivid life. Although he was Irish, Spencer Tracy is very convincing as a Portuguese man. He was coached to have an effective accent, and his looks were altered with tan makeup and a dark, curly wig. Manuel is quite different from many of Spencer Tracy’s other roles, but he is a charming character who is a lovable hero.

Harvey Cheyne is played by Freddie Bartholomew, who is an excellent actor. His boyishly pretty face with delicate features adds to the impression that he is a spoiled young aristocrat. His voice and refined British accent are so sweet and pure that they are almost girlish; in fact, they remind me of the voice of Alice in the Disney movie Alice in Wonderland. Throughout the film, however, he proves himself to be a sensational actor who is not afraid to participate in rough activities. He displays the entire range of emotions. He easily acts proud, shows affection, proves his bravery, and even sheds tears. This whole film rested on young Mr. Bartholomew’s acting as much as Mr. Tracy’s. He is the real protagonist of this story. If his acting had not been so good, the film could not have succeeded. It is wonderful to see someone so young with so much talent and work ethic. Also, it is wonderful to see such a fine opportunity for a young person to develop and display his talents.

No film can fail with Lionel Barrymore at the helm. As the captain in Captains Courageous, he sets and sails the course for the film as well as the ship We’re Here. Lionel Barrymore could play a vast array of roles with ease and naturalness. I have seen him play the kind, honest Judge Hardy in A Family Affair from 1937, the lovable, eccentric Grandpa Vanderhoff in You Can’t Take It With You from 1938, the curmudgeonly but soft-hearted Dr. Gillespie in the Dr. Kildare series from 1938 to 1942, and the heartless, greedy Mr. Potter in It’s a Wonderful Life from 1946; he is very different but consistently convincing in each one. As Captain Disko, he initially acts wise, practical, and concerned.

However, as the film progresses, he begins to become obsessed. It becomes obvious that he is obsessed with his competition with Captain Cushman. He is confident that the We’re Here is winning, so he is very proud and pompous. However, after all the fishing is done, the Jenny Cushman leaves for Massachusetts first.

There is nothing to gain by winning besides satisfaction, but Captain Disko Troop is fanatically determined not to lose. He becomes reckless and irresponsible in the mad flight to finish first. Mr. Barrymore portrays this effectively. The change which he creates in the role is startling. He goes from a rational, steady leader to a crazed, compulsive madman. All wisdom and sense are lost to desire and pride. I think the saying “Pride goeth before the fall” is one which Captain Troop needed to hear during this part of the voyage. He becomes like Captain Ahab from Moby Dick. The desire to beat Captain Cushman is his white whale. He will risk the safety of his ship, his crew, and himself to get what he wants. I don’t know anyone who could have conveyed this better than Lionel Barrymore.

I would like to thank my hostess at In the Good Old Days of Classic Hollywood for inviting me to participate in this blogathon. This is just the first of my three entries in the Barrymore Blogathon. Tomorrow I will post an article about Ethel Barrymore in Just for You, and the next day I will post an article about John Barrymore in Maytime. I enjoyed writing this article very much, and I hope you enjoyed reading it. Under the Code, there were not children’s films and adults’ films; there were excellent films which everyone could enjoy. Every picture was a family picture, regardless of its seriousness. All films were proper, so everyone could enjoy all genres of film. Under this system, adults were not contaminated by the dirtiness of so-called mature films, while children were made more mature by exposure to more mature subjects. The current system keeps potentially beneficial topics out of films with wholesome ratings, since filmmakers do not know how to present them delicately. When Mr. Breen was the head of the PCA, everyone could enjoy excellent dramas like this without any fear of inappropriate, distasteful, or gruesome content. To really understand how marvelous this can be, watch this excellent Code film and notice these outstanding virtues. Climb aboard the good ship We’re There, and let Captain Troop sail you into the clean, entertaining waters of Captains Courageous! 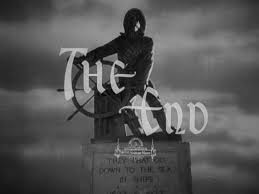 4 thoughts on “Lionel Barrymore in “Captains Courageous” from 1937”