For my fifth Breening Thursday article, I am going to breen It Happened to Jane from 1959. This film stars Doris Day and Jack Lemmon, and it was directed and produced by Richard Quine. Like the film I breened last time, You Can’t Run Away From It, It Happened to Jane is a very clean Shurlock era film. Unlike Jack Lemmon’s other film that year, the infamous Some Like It Hot, which was too blue even to receive the lenient Shurlock seal, this picture was not trying to be risque; the few problems are not intentional violations of the Code. I chose this picture because it has a strong message which I would like to discuss. After I tell the movie’s story, I will mention my breenings. 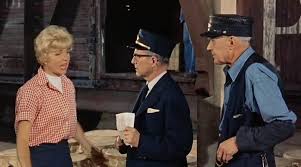 Jane Osgood, played by the lovable Doris Day, is a beautiful and determined young widow who lives in the quaint town of Cape Anne, Maine. She is supporting herself and her young son and daughter with a mail-order lobster business. When a huge order of her lobsters is returned dead by train, Jane is devastated. She soon learns that the lobsters died because the railroad company’s staff has been cut, so there was no one to receive the shipment.

These cuts were made by the greedy, tyrannical owner of Eastern and Portland Railroad, Harry Foster Malone, who disregards customer relations to make more money. Malone is nastily played by Ernie Kovacs. Jane enlists the help of her kind but insecure lawyer, George Denham, who is lovably played by Jack Lemmon. He has loved Janey all his life, but she married their strong–minded friend, Hank. Every year, George runs for first selectman of Cape Anne, but he never has defeated the permanent first selectman, Aaron Caldwell.

The E & P Railroad sends two lawyers to peacefully settle Jane’s complaint, but she is not easy to appease. They offer her the retail price of the three hundred dead lobsters, $700, but Jane argues that they also killed her business with that customer and all the other hotels. At first George supports her claim to damages, but he quickly realizes the fierceness of the opposition and advises her to take the money. She refuses, so they must go to court. This is the beginning of her fight with Harry Foster Malone.

Jane wins the hometown case against the E & P Railroad, but Malone’s lawyer appeals to a higher court. To force the tyrant to pay her the money she was awarded, Jane files a writ of execution and takes possession of one of Malone’s trains, Old 97. This brings her to the attention of the Daily Mirror, a New York newspaper which sends a handsome reporter, Larry Hall, to Cape Anne to get her story. Larry is suavely played by Steve Forrest. The dashing reporter quickly takes a liking to Janey, much to George’s displeasure. Larry’s article wins Jane the attention, sympathy, and love of the nation. The only American whose heart is not softened by her struggle is H. F. Malone. As he bitterly fights his popular opponent, who only wants what is right, he spare nothing in his indefatigable attempt to defeat her. Can determination and principles defeat greed and dishonesty in this battle, or will Cape Anne and the E & P Railroad be destroyed by Harry Foster Malone’s selfishness? Watch this fine film to find out!

As you watch this movie, look for these few objectionable elements. They are not huge, but they are something to be considered. Firstly, a running joke in this film is the fact that Jane’s children have a pet lobster, Sam, who is always trying to go to the female lobsters’ side of the dock. Jane’s son asks her why Sam always wants to go to the girls’ side, and she looks reluctant to answer before the camera cuts away. I think this scenario may prompt the same question among children in the audience, so it should be eliminated. The film wouldn’t be less entertaining without this.

Harry Foster Malone finds it impossible to refer to women by any noun beside broads. As I have mentioned in previous articles, this is a direct reference to the wideness of a woman’s hips, so it is vulgar. I know that he is a lecherous, brutish rogue, but I think this will not be lost if that word is not used. Broads should always be replaced with dames, which sounds demeaning, too.

When Malone is being shown the plans for his company’s summer advertisement, he complains that there are no women in the advertisement. He says there should be some women in bikinis. He tells his assistant to get the two girls from Newark. Bikinis were considered too revealing to be shown in Code films, so I don’t think there should be any reference to them. When Malone asks from where those two girls come, he looks far too lecherous. I think we can understand what sort of character he is without being so obvious. The scenario with the girls from Newark should be cut. He should simply say that there should be some beautiful girls or dames in bathing suits.

Mathilde is the switch board operator, reporter, and gossip of Cape Anne. When she wants to call the New York office of the Daily Mirror, the line is tied up. In response to a conversation she hears on the telephone, she tells the speaker, “You’ve gotta get that cat spayed. They’ll eat you out of house and home.” It is improper to discuss animals being spayed. This conversation should be changed to something acceptable.

When Mathilde finally reaches the New York editor, she is very excited about the story she has about Jane putting a writ on Old 97. She plans to go to New York to give him the scoop. Trying to calm her down, the editor says, “Hold onto your hat, Mathilde.” The italicized words are a forbidden expression listed in the Code. This should be changed to something like “Simmer down.” 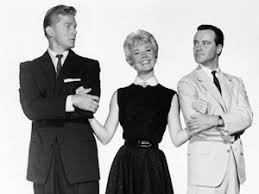 Jane goes to New York with Larry to be on some television shows which will help her fight against Harry Malone. George is very jealous. One night, Jane and Larry stay rather late at a chic restaurant. Jane returns to Cape Anne the next morning, and George is very annoyed, since he thinks he is losing her to the cosmopolitan reporter. He says that he called her hotel room at three o’clock in the morning, and she was still out. He asks her where she was. She innocently replies, “I told you. I was with Larry.” Looking shocked, George says, “You admit it.” “Admit what?” Jane says then detects his implication. She orders him out of her house. Obviously, George is implying that Jane was in Larry’s hotel room. I don’t think he really means it, since he knows that Jane is a nice girl. Despite this, this exchange is very suggestive; it must be removed.

Though this picture was made in the Shurlock era, it has an outstanding moral. It represents the David and Goliath theme. Jane, a small, insignificant person who represents David, fights Harry Foster Malone, a hugely important tyrant who represents Goliath. With nothing but the slingshot of principle and the stones of honesty as her weapons, she confronts the mighty Goliath. Someone with that much determination can never fail. PEPS could be considered a David confronting a mighty Goliath, Hollywood. Now, with only four members, thirty supporters, and a huge opponent, it may seem like our goal is impossible. However, like Jane, we have determination and principle on our side. With the Code as our slingshot and supporters as our stones, we can defeat the mighty giant. However, we need more stones to topple the Philistine. Will you join us?