This article is part of “The Third Annual Barrymore Trilogy Blogathon” at In The Good Old Days of Classic Hollywood: https://crystalkalyana.wordpress.com/2017/05/26/announcing-the-third-annual-barrymore-trilogy-blogathon/

Just for You was made in 1952. This musical with Bing Crosby, Jane Wyman, and Ethel Barrymore is the subject of my second contribution to the Barrymore blogathon. Miss Barrymore, who was born in 1879, was the second child and only daughter of actors Maurice and Georgiana Barrymore. Her career of over sixty years led her from the stage to the silent screen and eventually to the talking picture. She appeared during the pre-Code, Breen, and Shurlock eras. I will review this film, which shows the approach of the end of Hollywood’s Golden Age and Ethel Barrymore’s acclaimed career.

Just for You tells the story of Jordan Blake, an acclaimed Broadway producer who has had greater success as an entertainer than as a father. 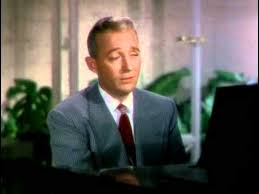 Bing Crosby brings his usual charm and talent to this role of a frustrated widower. Jordan has been too busy to bond with his eighteen year old son, Jerry, and his fourteen year old daughter, Barbara.

Jerry is played intensely by Robert Arthur, and Barbara is played by a pretty young Natalie Wood. His girl, whom he playfully calls Babs, has been trusted to nannies, but she bears no resentment toward her father. On the other hand, Jerry, who has spent many lonely years at boarding school, feels bitter and neglected. All Babs wants is to be admitted to the exclusive St. Hilary’s girl school, but she fears that her father’s career and social position are not high class enough for the uppity school. Meanwhile, Jerry wants to be a songwriter. He has put his whole heart into composing a song, “Call Me Tonight.” When Jerry shows the song to his father, Jordan coldly criticizes the number as trite, commonplace material which is a dime a dozen in Tin Pan Alley. Jerry is completely devastated. The unfortunate youth chose a bad time to talk to his father, who was tired and irritable from a long day of work. However, the elder man was overly harsh with his sensitive son, especially because they do not have a close relationship. Jerry becomes completely discouraged with everything he has written; the situation further alienates the pair. Mr. Blake is concerned about his relationship with his children, so he takes them up to the mountains where they can bond. As he tries to get closer to his children, Jordan considers adding a mother to the family. He is in love with the leading lady in his show, Carolina Hill.

Jane Wyman is the beautiful, talented lady whom he is considering as his future wife. Little do they know that there is yet another problem which will complicate their road to a happy family. Jerry is also in love with Carolina; he too is planning on changing her name to Blake. When Carolina tries to give him maternal advice regarding him and his father, he misinterprets it as a return of romantic affection. Jordan easily befriends Alida De Bronkhart, the refined, mature matron of St. Hilary’s school.

Although he initially thinks that she is a lady mechanic, he charms the dignified head of the school, who is played by a seventy-two year old Ethel Barrymore. Despite his low class profession on Broadway, Miss De Bronkhart likes Mr. Blake; she gladly admits Babs into the school. It will not be so easy for Jordan to solve his problems with Jerry. Can he make Jerry understand his mutual love for Carolina without breaking his heart and severing their relationship forever? Watch this picture to find out!

This picture is filled with lots of wonderful music which was written by Harry Warren and Leo Robin and performed mostly by Bing Crosby and Jane Wyman. There is a lot of talent in this movie. 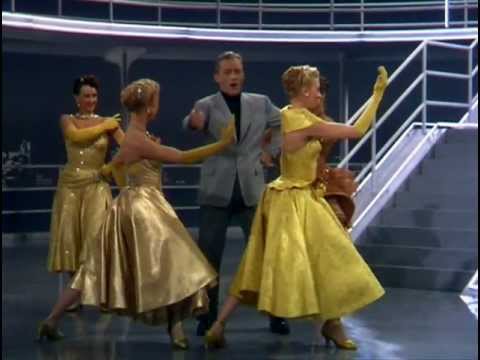 When Jordan is rehearsing his show, he demonstrates “I’ll Si-si Ya in Bahia” with a singing and dancing chorus and an elaborate set.

In the mountains, he attends a picnic held by the St. Hilary girls; he joins the student chorus in the playful “The Live Oak Tree.”

An unexpected pleasure is when Jordan meets an old show business pal of his, Georgie, at a refined St. Hilary event; he can’t resist doing their old number, “The 10:10 on the Ten-Ten-Tennessee,” much to his daughter’s horror. It is so interesting to see Ben Lessy, who plays Georgie, in a musical role, since he usually is seen in minor roles with few lines. So many people had hidden talents!

Jordan also sings two songs which his son has written, the unimpressive “Call Me Tonight” and the sensational “Just for You,” which is named in the title. Carolina is seen rehearsing “He’s Just Crazy for Me” several times. It is a number from the show, and Jordan must find a way for her to make a costume change on stage without violating the rules of propriety.

She also performs two elaborate numbers from the show, “Checkin’ My Heart” and “The Maiden of Guadalupe.”

Finally, there is the big duet between Jordan and Carolina, “Zing a Little Zong,” which is performed twice. This popular song was #18 on the charts for six weeks! Ethel Barrymore is very dignified as Alida de Bronkhart. She is effortlessly amusing in the comical parts, but she always retains her composure. One can see her great talent and vast experience even in this somewhat small role. She is still beautiful as an elderly lady. Miss Barrymore had an air of grace and beauty which time could not remove. There is still the Victorian era lingering around her.

Her mere presence in this film brings it to a new level. Less magnificent actresses could have played the role, but they could not have contributed what the great Ethel Barrymore did. It is a real pleasure to see her great acting talents captured on film, since many of her best performances were given live on the stage; they can never be relived. However, in Just for You and many other excellent pictures, her talent can be enjoyed almost sixty years after her death. It is a treat to see three generations of talent in this movie. Don’t wait to see this brilliant Code film!