Many months are claimed for honoring different causes, groups, or ideas. In 2018, PEPS declared July to be #CleanMovieMonth because the Motion Picture Production Code began to be enforced in July 1934 with the formation of the Production Code Administration (PCA) on July 15. Also, Martin Quigley first described the concept for the Code five years earlier in July at a meeting in Chicago. Thus, we have decided that July is a good month to celebrate the Production Code, the American Breen Era (1934-1954), which is the twenty years during which Joseph I. Breen enforced the Code as head of the PCA, and the films made during that time. This month is all about decent entertainment and clean movies!

Every year, we celebrate #CleanMovieMonth by exclusively watching Code films. That means that, for the entire month, we pledge to watch nothing but American movies made between July of 1934 and 1954. This isn’t difficult for us, since most movies we regularly watch are from the American Breen Era. It’s not difficult for us to only watch and review our favorite era of Hollywood for a month! During the last two years, we have invited our fellow bloggers to join us in this study of the era of decent films, and we have had some wonderful responses and excellent guest articles, which we reposted on our website. 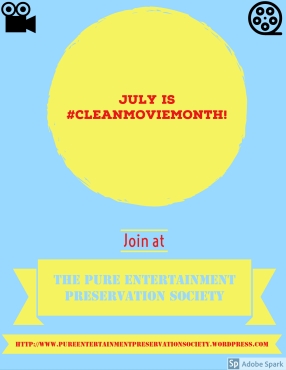 Click here to see all the entries for 2018’s #CleanMovieMonth, the first celebration.

Click here to see all the entries for 2019’s #CleanMovieMonth85, which honored the eighty-fifth anniversary of the PCA’s formation.

Since it is now June, we are planning this year’s celebration of #CleanMovieMonth. We celebrate this month a little differently every year, giving it a new name each year. This year, we are calling it #CleanMovieMonth2020. To celebrate this special month, I am going to post reviews of twenty different Code films which I have never reviewed on PEPS before. Some of these will be my 100 New Code Films articles for the month. The remaining number of reviews will be of Code films I have seen before but have never reviewed on PEPS. Of course, we are going to abstain from watching any movies save those made during the American Breen Era. Thus, we will suspend our Breening Thursday articles during July. Instead, we will publish Code Concepts articles. We will be back to breening with a vengeance in August! We will continue publishing Film Fashion Friday analyses of costumes from Code movies.

As the highlight of #CleanMovieMonth2020, we are hosting a special blogathon around the anniversary of the PCA’s formation. It is called the Code Classics Blogathon, and it is about Code films adapted from classic literature. We are hosting it on July 14-17. Please join!

If you want to participate in #CleanMovieMonth2020, please join us! You can participate as much or as little as you want. Even one themed article would be a wonderful tribute to this month dedicated to Code cinema. All contributing articles will be republished on our website. To find out how you can join this celebration, read the following guidelines: