Today is Wednesday, and I am going to publish my first 100 New Code Films article of the week. I am publishing this article earlier in the week so that it can be an entry in a blogathon. This purpose of this semi-weekly series is to give me a schedule for discovering new Code films. To reach my goal of seeing 100 American Breen Era (1934-1954) movies this year which I have never seen before, I must watch and review two such movies in all but four weeks this year. This series not only expands my knowledge of Breen Era and increases my list of watched films; it also gives PEPS a steady stream of new articles about Code films. 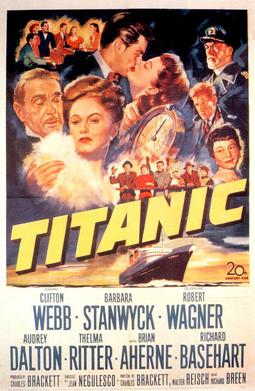 Today’s topic is Titanic from 1953. I am writing about this movie for the Disaster Blog-A-Thon. When I heard about this blogathon, I decided that it was the perfect opportunity to watch and review the 1953 version of Titanic. One hears so much about the 1997 film of the same name, yet just from seeing the trailer one can see that it focused more on the sordid romance between its leading characters than on the boat’s tragedy. I was eager to see the Code film about the ill-fated maiden voyage of the doomed British ship. My father saw it years ago and frequently quotes a famous line from it, so I wanted to see it for myself. I watched this film online today.

A wealthy American woman leaves Europe with her two children, a grown daughter and a young son, aboard the Titanic. Little do her children know that they are leaving their father to live in America for good. The woman’s husband learns what she is doing and boards the boat by buying a ticket from a third class passenger. On board, his wife tells him that she wants the children to grow up to be Americans, not European society dwellers. When the daughter finds out about her parents’ separation, she wants to go back to Europe with her father. However, the father’s steadfast intention to get his son, as well, makes his wife confess that he is not his son. Meanwhile, the daughter feels herself falling for a handsome American college student aboard the ship. Will the doomed ship bring these people closer together or separate them forever? 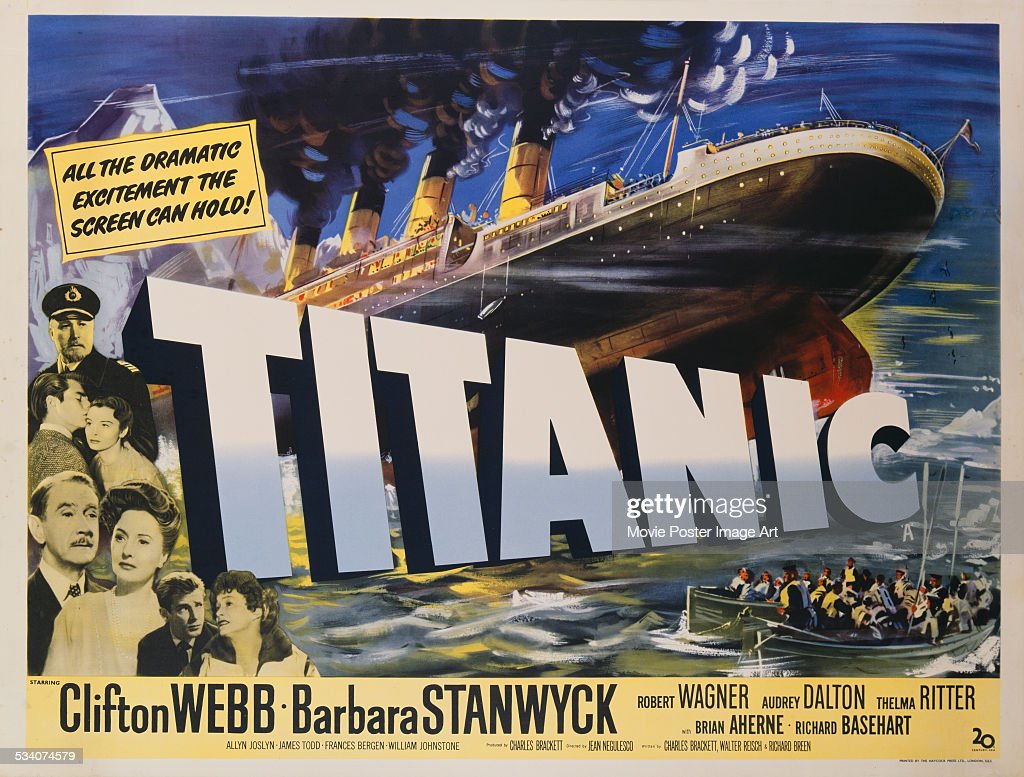 This is a perfect Code film. It is a story of love, forgiveness, and redemption. Although one of the worst tragedies of the twentieth century is depicted in this film, it is not grotesque or horrible. The massiveness of the tragedy is shown through sensitive depictions of individual people. Two difficult topics are handled very well. Firstly, Julia Sturges (Barbara Stanwyck) admits to her estranged older husband, Richard (Clifton Webb), that he is not the father of her son, Norman (Harper Carter). The concept of a married woman having a child out of wedlock is discussed delicately, not condoning the sinful act but also not condemning the boy born of it. Once Richard learns that his beloved Norman is not his son, he becomes very prejudiced against him. He shuns the adoring boy, wanting nothing to do with him. This is shown as very wrong, since it isn’t the boy’s fault. Ultimately, Richard accepts Norman as his son, since he has loved him his whole life. This shows that parents don’t have to be biological to be loving parents. The other difficult element is a subplot involving George Healey (Richard Baseheart), a young priest who was defrocked because of his alcoholism. This is a sensitive topic, since clergymen always had to be depicted respectfully in Code films. However, alcoholism is a serious problem which plagues many people, including men of the cloth. Julia shows great kindness toward him, since she pities his drunken state. After he receives her help, he seems to be more sober. Ultimately, he becomes a hero, redeeming himself by trying to save others for God’s sake. The ship’s band playing “Nearer My God to Thee” adds a very inspiring religious element to this film. This movie manages to be very gripping without being any violent or gruesome imagery.

I highly recommend this film. It is indeed a masterpiece. This movie may not be completely historically accurate regarding the actual sinking of the Titanic, but it creates a strong impression and is very impacting. Firstly, the acting is marvelous. Clifton Webb gives a very strong and emotional performance as the leading man of this film. It is rare to see this marvelous actor in such a prominent role, since he usually played strong supporting characters, often with a comical twinge. Richard may seem selfish and shallow at times, but it is obvious for much of the film how much he cares about his children as well as his wife. Barbara Stanwyck is wonderful as Mrs. Sturges, the wife who has tried for years to be something she isn’t and wants to spare her children from the same shallow life. She seems cold at times, but all her actions are motivated by deep concern and love for her children and, deep down, her husband. This is the first time I have seen Robert Wagner in a film. I found him to be very charming as Giff Rogers, the American college student returning from European tennis matches. He is very handsome and charismatic in this role. Audrey Dalton is lovely and exotic as Annette, the Sturges daughter. This character manages to keep the audience guessing, at least for a while. She seems a bit like a spoiled brat at first, yet she reveals unsuspected depth as the film progresses. Her devotion to her father is touching. Thelma Ritter is funny and charming as Maude Young, a Molly Brown-type character; Brian Aherne embodies the difficult part of the cursed boat’s captain, E. J. Smith; and Richard Baseheart is pitiably pathetic as George Healey, the former minister who is torn between his love for God and his fleshly weaknesses. The rest of the cast is marvelous, as well. The great performances are too numerous to mention. The costumes are beautiful, and the historic details are lush. The special effects, such as the ice berg, the life boats, and the ship, are all very convincing and charmingly un-CGI animated. This is a marvelous movie.

The Disaster Blog-A-Thon is being hosted by J-Dub of Dubsism and Quiggy of The Midnite Drive-In on June 10-12. This blogathon is these gentlemen’s response to the current disaster plaguing the world, the global coronavirus pandemic. These two film bloggers are using this blogathon dedicated to disaster movies to remind readers that the current health concern is not a disaster as serious as many other situations. This blogathon is full of earthquakes, floods, sinking ships, tornados, locusts, and many other acts of God or freak accidents which can occur. I decided to join this disastrous affair with a review of the Code film account of one of the most infamous disasters of modern history, the sinking of the Titanic, an unlucky combination of natural phenomena and human error. 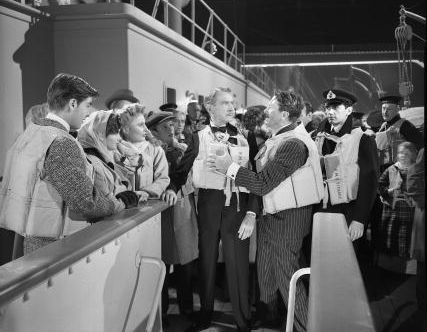 This movie shows how people respond to a crisis and how they act during times of disaster, which can bring out the best or worst in human nature. Some people act brave and generous, while others become selfish and cowardly. A few characters are selfish and weak when they realize that the ship is sinking. Many women cry, and most passengers are understandably terrified. However, only one character displays true cowardice, Earl Meeker (Allyn Joslyn). This nondescript fellow tries to invade the upper circles of first class passengers on the ship, although he doesn’t seem to be a socialite himself. He is merely a social climber who wants to have influential friends. When he learns that the ship is sinking, he begs Mr. Sturges to help him get on one of the lifeboats, but Mr. Sturges is not interested in helping weaklings. Only women and children are being put on the lifeboats, but Meeker manages to get on a lifeboat by donning a woman’s coat. The rest of the characters are good examples of heroic behavior during tragedies. Richard goes to the third class deck to help a Basque family get onto a lifeboat. Norman gives up his seat on the lifeboat to an older woman, choosing to stay on the ship with his father and the other men. Giff dangles above the frigid waters on the ropes, trying to free up a lifeboat so that it can lower away. Many sailors fearlessly stay at their positions so that they can help as long as they can. Ida Strauss (Helen Van Tuyl), an older woman, gives up her spot in the lifeboat to another woman, choosing to stay with her husband of many years (Roy Gordon) on the ship. The spirit of quiet, calm faith in times of disaster, such as the people on the Titanic’s deck exhibit, is one from which we can all learn in times of trouble. During disasters, we must come together as the band plays “Nearer My God to Thee” and just sing, quietly awaiting whatever will happen.