Today is Sunday, so it’s time for another article in the weekly series which we started at the beginning of this year, 52 Code Films. When I recently told a friend that I mainly watch movies made between 1934 and 1954, he expressed concern that I would soon run out of new movies to watch. He was very surprised when I told him that thousands of American movies were made during those twenty years. It is easy for even devoted classic film fans to underestimate the sheer scope of the Golden Era of Hollywood. There are so many marvelous movies to see just from the American Breen Era, not even counting films from the Pre-Code Era and the Shurlock Era, that we can probably never hope to see all of them. However, maybe some of us aren’t trying hard enough to seek out new movies. I created this series to ensure that I keep watching new Code films throughout this year. I hope that you have enjoyed accompanying me on this movie journey!

Today’s topic is Brigadoon from 1954. We have had this film in our collection on VHS for my whole life, but I never had seen it. I have been curious about it recently, since I acknowledged that it was from 1954 and thus was a possible topic for a 52 Code Films article. When I heard that Michaela of Love Letters to Old Hollywood is hosting a Van Johnson tribute blogathon again this summer, I decided to watch this film and review it as participation. Thus, this is my entry in The Third Van Johnson Blogathon, which is being hosted August 24-26. I watched this film on Thursday.

Two young American men from New York go hunting in Scotland. One of them is an engaged man who still believes in things he can’t explain but is unsure about his impending marriage. The other is a bitter cynic who drinks heavily and doesn’t believe in anything he can’t see. After getting lost, they stumble upon a quaint town named Brigadoon which isn’t listed on any map. The two strangers immediately notice that something is strange about the village, such as the residents’ traditional clothing and their surprised reaction at seeing outsiders. The two Americans are surprised by strange references to a miracle. The second hunter is perturbed by the strange town, so he is eager to leave, but his friend finds it enchanting. Perhaps that is largely because of a beautiful lass which he meets in the village. The other friendly villager he meets is a young man who is going to be married that day. The outsider is glad to hear that the bride-to-be is his pretty young friend’s sister instead of her. The older sister has patiently waited for her laddie for years, but, when she sees the stranger, she wonders if she has found him at last. All the villagers are happy in Brigadoon except one hotblooded young man. He is in love with the bride, and since he can’t have her, he is miserable in the isolated village. He is disgruntled because he knows that he, like every other resident of the village, must stay within the town’s limits forever. When the two visitors learn that the villagers are still in the year 1754, two hundred years behind the times, they are filled with curiosity to know the truth about Brigadoon. They talk to the schoolmaster, who reveals the secret of the strange and wonderful village and its miracle, which is both beautiful and tragic. The young hunter finds that he has one day to decide if he wants to stay in Brigadoon forever, trapped in a different century, or leave and watch the girl he loves fade into the mist. This film was directed by Vincente Minnelli. It was produced by Arthur Freed. The production company was MGM. The screenplay was by Alan Jay Lerner, based on the musical by the same gentleman. The score is composed of numerous songs with music by Frederick Loewe and lyrics by Alan Jay Lerner. This movie was nominated for three Academy Awards, Best Color Set Decoration for Cedric Gibbons, E. Preston Ames, Edwin B. Willis, and F. Keogh Gleason, Best Color Costume Design for Irene Sharaff, and Best Sound Recording for Wesley C. Miller. It won a Golden Globe for Best Color Cinematography for Joseph Ruttenberg.

This is a fair Code film. For the most part, it is very decent and wholesome. In fact, it is essentially Code-compliant. There are no indecent costumes, no risqué lyrics, no unacceptable scenarios, and no undo violence. The only reason I am compelled to classify it as less than a good Code film is that there are two suggestive lines spoken by Van Johnson’s character. Firstly, a village girl won’t leave Jeff alone, since she thinks he would make a fine husband for her. He, however, just wants to be left alone so he can take a nap. Urging her to go away, he warns her that he makes very strange noises while he sleeps. She asks him how he knows that, since he has already confessed to never having been married. With a rascally smile, he says, “I was engaged once.” This line is inappropriately suggestive, since it implies that he may have lived with his fiancée before marriage. Later, Mr. Lundy is telling the two strangers that, two hundred years ago, the minister was concerned because a band of witches was headed toward Brigadoon. He describes these evil women and asks the Americans if they have women like that in New York. The bored Jeff says, “Yes, but we pronounce it differently.” This reference to a vulgar name for women is quite unacceptable. Because of these two minor elements, I classify this as a fair Code film. However, it is generally very wholesome and decent.

When we rediscovered this film in our collection, my parents began discussing their opinions about it. They hadn’t watched it in years, yet they both remembered it as a poor film from the last time they watched it. They didn’t remember why it was inferior or even much about it, but my father clearly stated that he found the I Love Lucy parody to be better. Because of this opinion, I was a little reluctant to watch this film, but we all decided we were curious to see what was so bad about it. At the opening, I thought that I saw the film’s problem. The first musical number in the town square was quite long and featured the sort of group singing which I don’t like in many musicals from Broadway because they seem too stagey for a film. However, just as it was really beginning to lose me, the movie’s pace picked up with the entrance of Gene Kelly and Van Johnson. Suddenly, there was dialogue, story, and action. After that, the musical numbers seemed to serve the plot and advance the story rather than halt the action. The people singing and dancing sang and danced well, so it was very enjoyable. I thought that the acting was excellent. I was impressed by the Scottish accents which many of the characters affected. The romance between Cyd Charisse and Gene Kelly was very touching and believable. I thought their dances together were lovely. Van Johnson was very funny and effective in his part as the grumpy sidekick. I thought there were some lovely songs in the score, including the popular “It’s Almost Like Being in Love,” which I had no idea was from this musical. As it progressed, the fanciful story became very captivating, and I found myself getting very emotionally involved in the characters’ dilemmas. The color cinematography was beautiful, and it vibrantly showed the lovely period costumes. One aspect which I found very effective was the contrast when Tommy and Jeff went back to America. New York seemed so loud, tumultuous, and modern compared to the peaceful beauty of Scotland. 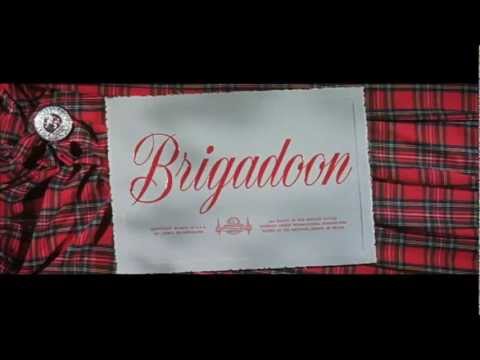 I recommend this film to fans of classic musicals. If you generally enjoy musical movies, you will doubtless like this film. If you appreciate great dancing, you will really appreciate the dancing which is brilliantly executed by Gene Kelly, Cyd Charisse, Jimmy Thompson, and the chorus. Gene Kelly himself choreographed the dancing, which is very stylish and smooth. I was impressed by the way he incorporated ballet and Scottish folk dances into the choreography. If you like Broadway musicals made into films, I’m sure you will like this movie. If you are not a fan of musicals, I wouldn’t recommend this as the first old musical to watch. There are better ones for those who are just warming up to music-filled films. However, if you already like stories which are filled with songs and dances, you will love this movie!

This is the grumpiest role in which I have ever seen Van Johnson. I was very impressed by the way he played a role which was quite contrary to his usual “type,” the wholesome boy next door. The only other film in which I have seen him display moments of similar irritability is The Bride Goes Wild from 1948, but his character in that film only shows moments of grumpiness, which are interspersed with goofy and irresponsible behavior that lightens his whole personality. On the other hand, Jeff is cynical and bitter throughout Brigadoon. He is sarcastic about love and romance, he doesn’t believe in things he can’t explain, and he doesn’t understand Tommy’s hopeful, whimsical view toward life. His cynicism leaves him quite hopeless, so he turns to drink to sustain his meager spirits. One of the things which I found the most impressive about his performance was his display of musical talent. In the town square, Charlie sings “I’ll Go Home with Bonnie Jean,” and many of the other men join him. One of them is Jeff! I never knew that Van Johnson had such impressive musical talents! He sings in a clear, strong, pleasant tenor voice. Then, he starts tap dancing, and I was so amazed by his smooth, clean footwork. He dances right alongside Gene Kelly, and he keeps up with him the whole time! In many films, Van Johnson assumed the role of the supporting man, but he was always brilliant in these roles. Whether comical, cynical, or a combination of both, he was always a huge addition to a film.