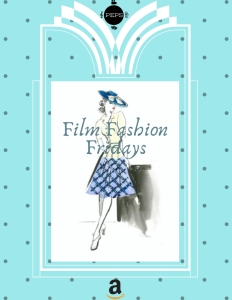 Every Friday, I usually publish a Film Fashion Fridays article. In this weekly series, I choose different costumes from Code films and describe how my readers can recreate these fashions for themselves with products sold on Amazon. I try to evenly alternate between ladies’ and gentlemen’s outfits if I can. My topics are sometimes chosen in advance if I join a blogathon over the weekend. That is the case this weekend.

As this week’s entry in our weekly series about vintage glamour inspired by film costumes, I am going to write about a costume worn by Janet Leigh. Thus, this article is also my entry in The Janet Leigh Blogathon, hosted by Michaela of Love Letters to Old Hollywood. This blogathon is honoring the 92nd birthday of Janet Leigh, which would have been today. I like to combine my weekly entries in my regular series such as 52 Code Films and Film Fashion Fridays with blogathons. Because yesterday was the beginning of our blogathon, The Favorite Code Film Blogathon, I decided to publish this week’s Film Fashion Friday article on Saturday, Janet Leigh’s actual birthday. Thus, this is our very first Film Fashion Saturday article! 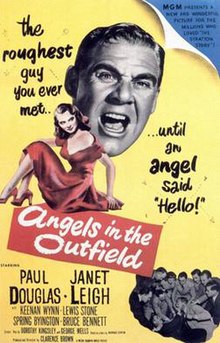 Today’s outfit of inspiration is from Angels in the Outfield from 1951. In this movie, Janet Leigh plays Jennifer Paige, a journalist who becomes a sportswriter for her newspaper when she forms definite opinions about the rough, foul-mouthed coach of the Pittsburgh Pirates, Guffy McGovern (Paul Douglas). The two find something in common when they both take an interest in a sweet young orphan, Bridget (Donna Corcoran), who sees angels helping the Pirates during their games in answer to her prayers. As this feminine writer, Miss Leigh wears ladylike, refined clothing which compliments her lovely figure but shows her modesty, since she is a very high-minded young lady. 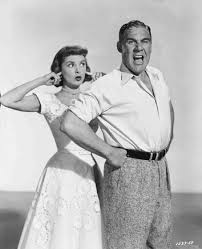 The dress is a swing dress. It has cap sleeves. It has a solid white bodice, but there is a large collar that has a lace eyelet pattern. There is a very thin white belt at the waist. The skirt has the same eyelet lace pattern as the collar. The skirt looks like it has a small petticoat under it. It is mid-calf length. The neckline is a rounded V-neck. Let’s see if Amazon has anything similar.

The above dress from Amazon is the best option I could find. It is a white swing dress with a beautiful rose lace pattern all over. The skirt is flared and knee-length. The waist is belted with a thin satin belt which gathers in a sleek bow at the front. The neckline is a V-neck with small sleeves that are described as off the shoulder. However, in the pictures of the dress on models, the straps are just barely off the shoulders. I think you can pull them up a little higher to make this look more like Janet Leigh’s dress. This dress’s material is 100% nylon on the exterior and 64% cotton, 32% nylon, and 4% on the interior. This style comes in black, dark blue, dark purple, dark red, green, off-white, pink, violet, and white, which is pictured. In a slight variation on this dress, which has no belt and a crossed over bodice, it comes in black, light purple, navy, pink, purple, red, and white, which I also think would look good in this outfit. This dress costs between $29.85 and $30.96, depending on which size and color you choose. It needs to be worn with a petticoat underneath. The below petticoat from Amazon looks like a good option.

Jennifer’s most noticeable accessory is a necklace. It is a three-strand pearl choker. The pearls are white and quite small. The pearls get larger toward the front. The strands are very close together. The below faux pearl necklace from Amazon is very much like Jennifer’s.

Jennifer is also wearing a bracelet on her left wrist. It looks like it is a string of pearls, too. I think that it is probably two strands twisted together. The below bracelet from Amazon is very similar to the one from the movie,.

Janet is also wearing earrings. She appears to be wearing dangle white pearl earrings. In the 1950s, most women wore clip-on earrings. However, most women now have pierced ears. Below are two pairs of earrings from Amazon. The pair on the left is for pierced ears, but the other pair is clip-on. 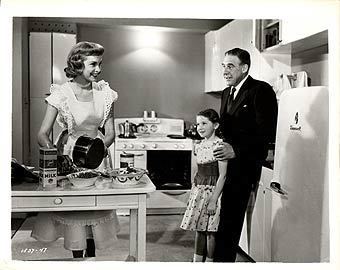 I couldn’t find any pictures in which Jennifer’s shoes are clearly visible. In the above picture, you can see just a little bit of her left shoe if you enlarge the picture. It appears to be a white sling-back shoe. They would doubtless be leather. Below are two pairs of white leather sling-back pumps from Amazon. The ones on the left have a 3.5 inch heel, and the ones on the right have a 2.5 inch heel, so you can choose whichever height you prefer. 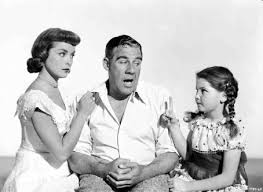 Miss Leigh doesn’t wear a hat with this outfit, but she wears two very cute white hats at other times in the movie. I would recommend having  a hat to go with this outfit, since Jennifer only doesn’t wear one with this dress because she was planning to spend the evening at Guffy’s apartment, not going out. I recommend the below white pillbox hat from Amazon. It is small, chic, and has a lovely veil. In addition, it is extremely reasonable at $11.99! 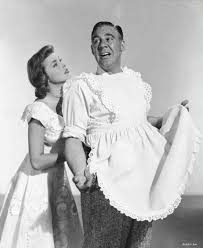 That concludes my description of this outfit!I think that this white dress is a lovely option for a summer party dress. It is light, festive, and feminine. Complete it with pearls, sling-back pumps, and a pillbox hat, and you will have a 1950s style which will make you the belle of the ball! Be sure to pair it with Janet Leigh’s warm smile and sparkly eyes to have a complete outfit! Happy Birthday, Miss Leigh! Here’s to a talented, lovely actress who should be remembered primarily for her sweet performances as decent ladies in Code films.

If you want to observe Miss Leigh’s style for yourself, I suggest that you purchase the movie and study his outfit firsthand! Click the above image to purchase Angels in the Outfield on DVD at Amazon.

5 thoughts on “Film Fashion Fridays #11: Janet Leigh’s White Dress in “Angels in the Outfield” from 1951”