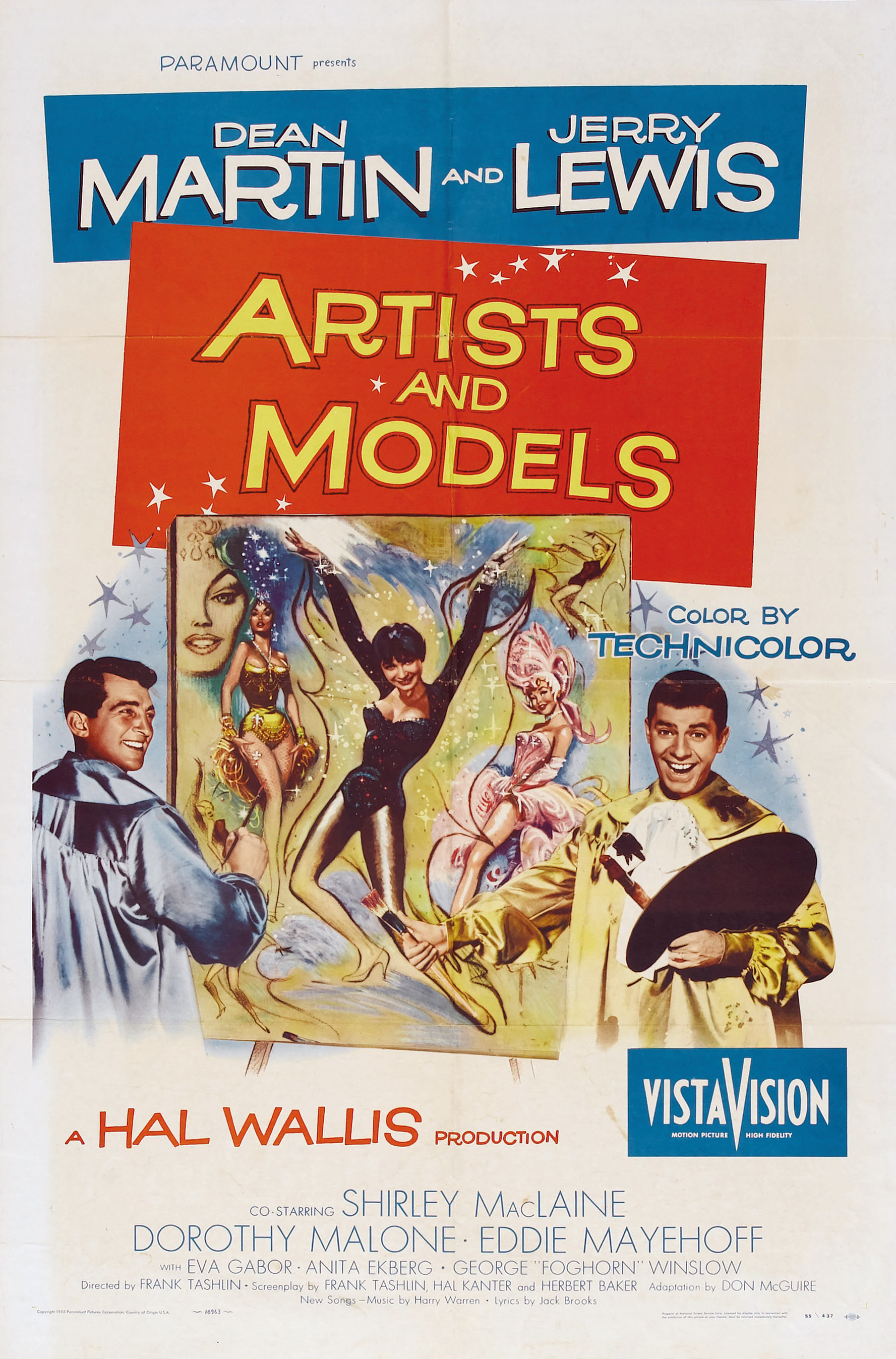 Artists and Models is the very first Martin and Lewis film made after Joseph Breen’s retirement as head of the Production Code Administration, putting it in the period during which Geoffrey Shurlock was in charge of the PCA. We at PEPS refer to this as the Shurlock Era. The difference between the duo’s Breen Era pictures and their Shurlock Era films is stark. I happen to be a big Martin and Lewis fan and have enjoyed their musical comedy since I was a very young boy. Before becoming involved in PEPS and understanding the Code, I knew there was a difference between their early, mostly black and white, films and their later ones. To put it simply, I just didn’t enjoy the later ones as much as the early ones; I just wasn’t sure why.  Now that I understand the Code, I know exactly why. 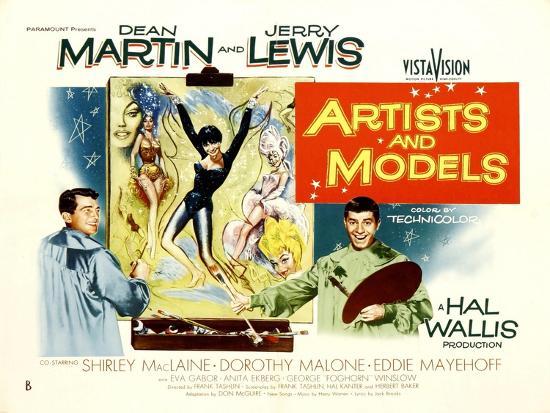 As I breen Artists and Models, please try to imagine what the film would be like with my suggested deletions and changes. Then, ask yourself these questions: Was the film less entertaining? Was it less funny? A good contrast is Martin and Lewis’ 1949 debut film,  My Friend Irma. It was good clean humor under Mr. Breen’s careful guidance, and I might add, hilariously funny.  Incidentally, Artists and Models was produced by Hal Wallis, who brought us Casablanca and other great Code films. It is shocking to me that just one year after the end of the Breen Era, he produced a film which defies the Code so blatantly.

And now, with no further delay, let the breening begin! During the opening credits we see models with very skimpy costumes. The actresses must have some sort of covering for the tops of their legs. Also, there must be no implied nudity.

At the film’s opening, Rick (Dean Martin) and Eugene (Jerry Lewis) are discussing the reason they left Stubenville. It is not clear whether Rick left due to a breach of promise or a paternity suit. It is likely a breach of promise, but it should be clearly stated, leaving no doubt for the audience. 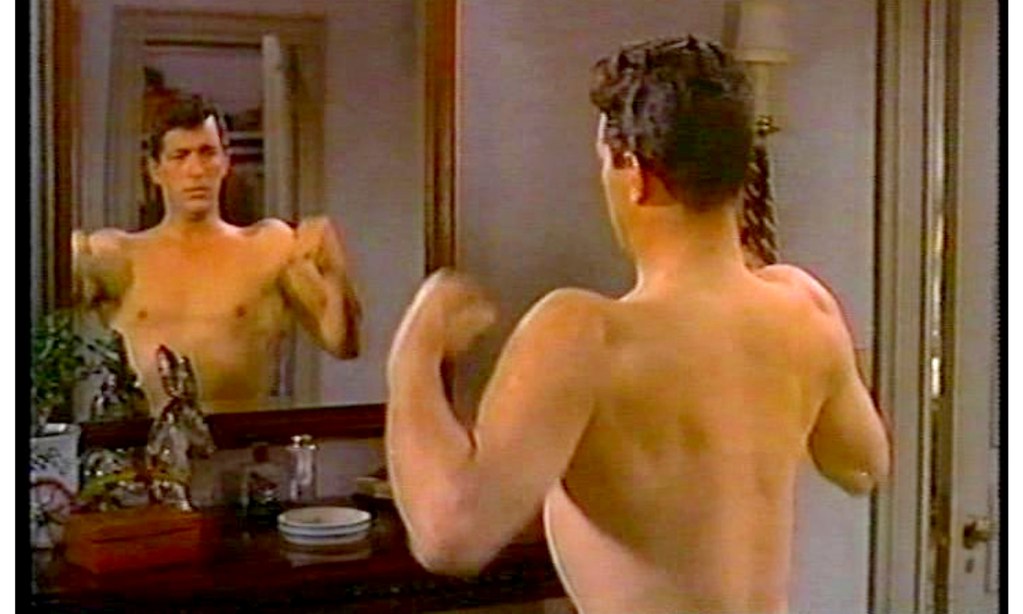 Rick sings a solo in front of a mirror with no shirt on. The song would be just as entertaining if Rick had on a tank top or a bath robe. Not only is it suggestive, but it is a distraction from Dean Martin’s fine singing.

In one scene, Eugene is near the apartment window just after dinner, which consisted of beans for him and Rick. He hears a couple arguing in the apartment above. The man is apparently not impressed with the steak dinner his wife has prepared. He states, “I’m gonna take this lousy steak and throw it out the window.” The word lousy is a slang term forbidden in the Code and should be substituted with crumby or perhaps rotten. On a personal note, this Code rule often gives me pause. Probably because compared to modern slang used in movies and in every day life it appears harmless. The word lousy is an adjective which means infested with lice. Perhaps the writers of the Code felt the use of this word as a negative would cast a slur on poor people. Lice were often a problem in homes where bathing and cleanliness was not affordable. I believe it is a good Code rule. 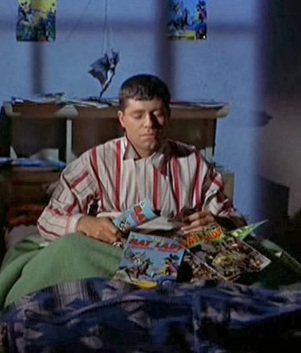 During Eugene’s nightmare in which he narrates a bizarre science fiction comic story about Vincent the Vulture, there are some problems. He describes Zuba’s cleaving cleavage, which is very crude and should be cut. He also describes gore oozing out of Vincent’s tail. This is disgusting and vulgar and should be cut. Eugene then says something which was a sneaky trick by the script writers, which would not have made it past Joseph Breen. When describing Zuba physically, Eugene says: “Her two, big, round… shoulders.” Perhaps very young children would not notice this double entendre, but it wouldn’t be lost on boys even as young as seven. I know. I was a boy, and a very easily influenced one.

Abby (Dorothy Malone), who is Rick’s love interest in the film, comes out of the shower covered only by a flimsy bath towel which looks ready to fall off at any moment. She should have on a bath robe.

Comic book publisher Mr. Murdock (Eddie Mayehoff) tells Rick that his comic book must include “blood spurting out of open wounds.” This is graphic and grotesque and should be toned way down or removed.

Bessie Sparrowbush (Shirley MacLaine) and Eugene kiss much too long at the water cooler. 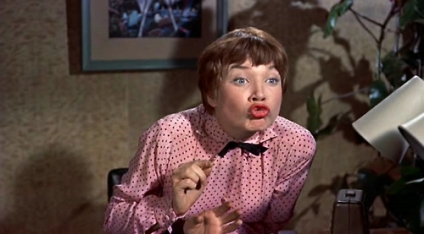 Bessie realizes that Eugene is in love with the Bat Lady, his favorite comic book character. Little does he know that she is the model who poses for the illustrator. As Eugene describes everything he loves about Bat Lady, Bessie tries to make him see those features in her. When he describes her lips, she puckers aggressively. When he describes her legs, she lifts her already too short skirt half-way up her thigh. Her aggressive pursuit of Eugene is inappropriate and questionable. Her puckering should be toned way down, and she should just straighten her skirt, not lift it.

Eugene and a devilish boy he encounters in Murdock’s office stick tongues out at each other repeatedly in a very disgusting manner. This is crude and must be changed.

In the same scene, Eugene ends up with the water cooler inside the front of his trousers soaking him as the boy laughs and points. This is unacceptable and crude.

Abby needs a male model to pose for an advertisement and asks Rick, “Have you ever posed with a girl?” Rick answers, “Not when anyone was looking.” This is suggestive and unnecessary and should be changed.

Abby appears to be infatuated with Rick. Rick asks her, “Aren’t you breathing a little heavy?” This is base and inappropriate and should be changed. Perhaps “Why are you blushing?” would work better.

While Rick is taking a bath and singing, too much of him is showing. He exposes his legs during the song, which is too suggestive. If the bath was full of suds, there would be little chance of seeing anything other than his head and shoulders, which would eliminate the problem.

There is a description of a five year old stuffing his grandmother into the trunk of a car. This is disturbing and a horrific image for young children. It must be removed.

Bessie’s sun suit has some problems. It is much too close to the color of her skin, implying nudity. The bottom piece is much too short, and the top is cut in on the sides, exposing the side of her chest. A lovely, modestly cut one-piece suit would have been more appropriate and would undoubtedly show Miss MacLaine’s nice figure in a lovelier way.

In his absurd dreams, Eugene has somehow been revealing the first half of the space program’s formula for reaching outer-space. Naturally, Russian-type foreigners immediately detect this formula in the comic book. Intent on discovering the rest of the formula, the USA’s enemies send a very dangerous spy, Sonia, a voluptuous blonde temptress (Eva Gabor). Sonia poses as Mrs. Curtis, a woman who wants Rick to paint a portrait of her for her third husband. She wears several indecent costumes, like a true temptress. When she poses for Rick, he doesn’t hesitate to make a play for her, despite the fact that she is supposed to be married. Her costumes should be revised, and she should say that she is a widow who wants a portrait for herself rather than for her husband. Also, there should be no suggestive invitation to her house. Spying is one thing, but the Mata Hari must be controlled.

Rick and Abby kiss on the roof in a very long and much too lustful way. This is not acceptable. A kiss can express affection without being overly long or passionate. In the Artist and Model Ball scene, the model’s shorts are too short.

Abby’s costume is cut much too high on the legs and should be altered. All the women in the living palette at the ball wear colorful outfits of different designs, all of which are revealing. These should all be decent costumes.

In the final scene where Abby and Bessie magically transform from their risqué costumes into lovely bridal gowns, for the first time in the film, they are dressed appropriately and, I might add, look their loveliest.

That concludes my breening. If you feel like having a good laugh, why not watch this Martin and Lewis comedy? Hopefully my article has inspired you to think about the ways this movie could have been made differently. If you want to see one of the best Martin and Lewis comedies, I recommend one of their earlier duos. They were a great team, but the Code made the team golden!

Click the above image to buy the five-film Martin and Lewis DVD set at Amazon and support PEPS through the Amazon Affiliate program!

One thought on “Breening Thursday: 21. “Artists and Models” from 1955 by James Brannan”