Today is the 21st day of #CleanMovieMonth. We are continuing to explore and review Code films every day in July. By dedicating this whole month to the decent, wholesome movies of the Breen era (1934-1954), we are finding new and wonderful virtues of the films from this time. Yesterday, we discussed a drama about an adopted girl from 1950, Our Very Own, for the Natalie Wood Blogathon. Tomorrow, we are going to review another drama, Stage Door from 1937, a story about aspiring Broadway actresses, for the Fred Astaire and Ginger Rogers Blogathon. In between these two dramas, we’re going to review a comedy from 1940, I Love You Again. 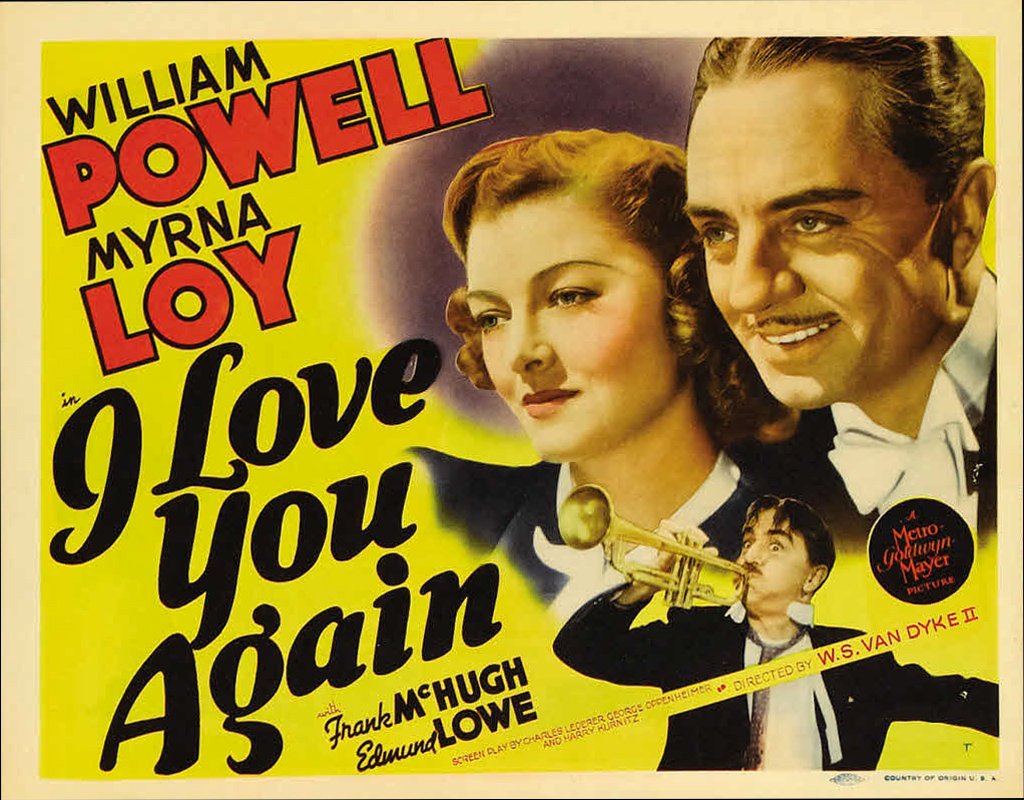 I Love You Again is an MGM comedy starring the famous Thin Man couple, William Powell and Myrna Loy. This movie has a really hilarious and unusual plot. It’s unlike anything I’ve ever seen. With direction by W. S. Van Dyke II, this movie is funny and entertaining from start to finish.

Larry Wilson is a very stodgy, uptight gentleman who is aboard a cruise ship. He speaks complexly, totally abstains, and tips stingily. On the last night on the boat, a quarrelsome drunk named Ryan tries to walk the ship’s railing to prove his sobriety. He falls overboard, and Mr. Wilson falls in when trying to throw him a life ring. As sailor’s in a life boat try to rescue the two men, Mr. Wilson is knocked unconscious when he is struck on the head by an oar. When he wakes up in his cabin, Ryan is by his side, eager to thank his new friend for saving his life. He swears that this experience has reformed him; he’s going to give up drinking and “go straight.” However, the patient, who doesn’t recognize Ryan, can’t understand why he isn’t on a train. He also doesn’t know why he keeps calling him Mr. Wilson; his name is George Carey. Ryan thinks he must be delirious, but the other man won’t let him call a doctor. He says that the last thing he remembers is being on a train going to the fights with $10,000 in his pocket. He got in a fight over the money with another con artist, and everything went black when he received a blow on the head. That was 1931. It seems that he doesn’t remember anything that has happened for the past nine years! He and Ryan deduce that he got amnesia from the incident in 1931. For the past nine years, he has been living as the stodgy Larry Wilson in a town called Habersville, Pennsylvania, with no recollection of his previous life as a shyster. Now that he is back to his old self, he is eager to find a partner in crime; naturally, he picks Ryan as his stooge, since he is a petty gambler and crook. When they realize that, as Wilson, he has over one hundred thirty-seven thousand dollars in the bank, they decide to head to Habersville and collect the money. When they arrive at the dock, Larry, or rather George, sees a beautiful woman waving onshore. He wonders who she is, but Ryan tries to keep him focused. To his delight, she comes up to him and starts talking to him as though she knows him. He is smitten with her, and she immediately notices that he is acting different. When he is getting the baggage, she tells Ryan, who is posing as Mr. Wilson’s physician, that she is his wife. George is shocked and delighted to learn that the woman with whom he is completely infatuated is already his! Ryan warns him to be careful and stay focused, but George is intent on romancing his wife, whose name, he discovers, is Kay. Later that day, Larry and Ryan receive a visit from a representative of the Habersville bank, since Larry sent for $5000. The two crooks are dismayed to learn that Stanley is now $200 overdrawn. It seems that the well-stocked bank account which was documented in Mr. Wilson’s papers is for the Community Chest. Having been an extremely community-minded, Mr. Wilson earned huge amounts of money for charity while making a modest living himself through his pottery business. He and “Doc” Ryan go to Habersville, hoping to find some way to pull off a swindle in the high-income town which will make them both a fortune. Meanwhile, George is dismayed to learn that his beautiful wife is having a trial separation from him, although she is still living in his house to keep up appearances. It seems that his alter ego was much less attracted to Kay than his current self is. After six years of marriage to an unemotional fuddy-duddy, Kay is planning to divorce him and marry a high-strung friend, Herbert, who strongly dislikes Larry. George is determined to make his lovely, new-found wife fall in love with him and agree to stay married to him, despite the fact that he and Ryan are planning to skip town after making their fast fortune. Will the two conmen be able to pull of their swindle without getting caught? Will Kay learn to love her husband’s new romantic identity? Will his love for her sway him from his dishonest plot? Watch this movie to see the hilarious answers to these questions!

This movie is filled with comedy. It’s filled with witty dialogue. In addition, there are some really funny physical stunts. As you can imagine, the fact that George doesn’t remember the last nine years or any details about his life as Mr. Wilson creates some very hilarious incidents. As usual, William Powell and Myrna Loy perform the comedic material in a very refined and intelligently amusing way. Frank McHugh is great as the funny sidekick. He plays very well off William Powell’s more serious character.

This film does a really good job of handling some delicate topics. Firstly, the leading man is a conman. That in itself could be a problem. For one thing, his crimes and schemes couldn’t be depicted in too much detail or in such a way as to inspire imitation. In addition, he is the sympathetic lead, so he is inevitably going to be a likable character. Thus, it was important to keep an eye on his actual criminal activities. He and Ryan could scheme, but any crimes which they actually committed would have to be punished. All the crime issues were handled really well. Their get-rich-quick swindle was a very unique situation. It wouldn’t be easy to imitate. In addition, all George’s crimes are in the past. Once he regains his identity, he only plots crimes. The situation is handled very well.

The other potential problem involves George and Kay. When the new version of Mr. Wilson sees Kay for the first time, he is immediately attracted to her. When he finds out that she is his wife, he is thrilled. In many films, this would have created the possibility for some suggestive situations. In this film, everything is handled properly. Obviously, there was very careful self-regulation. That was particularly important in this situation, since director Woody Van Dyke, although very talented, had a tendency toward mischief. However, when carefully guided, he was one of MGM’s finest directors. In his many films with Jeanette MacDonald and Nelson Eddy, I have noticed that his sense of humor was often a little goofy. This film, however, I found to have no traces of goofiness or risqueity. It just has witty, clean humor. Anyone can appreciate this movie. I recommend this to anyone who appreciates fast-moving, unusual, classy comedies from the Golden Era of Hollywood.