Today is July 22. This is another day in our month-long celebration of clean movies. We call it #CleanMovieMonth. This first annual celebration is PEPS’s answer to one of the greatest questions which plagues classic film lovers: what makes a movie a classic film? Our answer is that a true classic is a film from 1934-1954, the era when Joseph Breen enforced the Code through the Production Code Administration. We are seeking a deeper understanding of this unique era by reviewing a different Code film every day.

This weekend, Crystal Kalyana of In the Good Old Days of Classic Hollywood and Michaela of Love Letters to Old Hollywood are hosting the Fred Astaire and Ginger Rogers Blogathon. This is a swell celebration of one of the most iconic screen couples in the Golden Era of Hollywood. These great dancers and actors waltzed, twirled, and tapped through many famous pairings as well as separate films. Since no duplicates are being allowed and I joined a little late, I wasn’t able to reserve one of their collaborations from the Breen era. Thus, I am going to write about one of Ginger Rogers’s solo films from the 1930s.

Stage Door from 1937 was one of Ginger Rogers’s first dramatic acting roles. Before that, her roles were usually based on dancing rather than deep acting. In this drama, she had a chance to display a really dramatic talent, with some dancing in addition. This serious story about aspiring Broadway actresses features a heavily-female cast starring Katharine Hepburn, Ginger Rogers, and Adolphe Menjou.

The Footlights Club is an actresses’ boarding house. The proprietresses are aging women who constantly reminisce about their own stage glories. The residents of the club are young women who are working, scraping, and hoping against hope for their own success in the theater. Among them are Jean Maitland, a wise-cracking dancer, her sparring partner, Linda Shaw, a mature woman who receives generous gifts from a wealthy man, and Kay Hamilton, a sensitive young woman who was a hit in Anthony Powell’s play the previous year but hasn’t worked since then. The maid is a comical young woman named Hattie who constantly sings while doing her chores. The rest of the boarders are a colorful ensemble of sarcastic young women who are quick to joke, slow to get parts, and as close as sisters. One day, a wealthy young woman with a refined manner and beautiful clothes named Terry Randall moves into the Footlights Club, becoming Jean’s new roommate. Although Terry tries to be friendly, Jean is intent on being her enemy. Seeing her beautiful clothes and the picture of an elderly man she puts on the dresser, Jean naturally assumes that the man is not her grandfather, as she says. Miss Luther, the more enthusiastic of the two proprietresses, immediately takes the high-class Miss Randall under her wing by becoming her acting coach. One day, Jean and her dancing partner, Annie, are rehearsing their act when they notice Anthony Powell observing them. They are both aware of the fact that he is Linda’s sugar daddy as well as a very important man in the theater. He is clearly interested in the attractive, blonde Jean, but she quickly exits before he can talk to her. She doesn’t want to have anything to do with that sort of man. However, that evening, she and Annie receive a call that they are needed to perform at the Club Grotto. They eagerly rush over and dance in the show. However, the whole job makes sense when Jean sees Mr. Powell in the audience. Back in their dressing room, Mr. Powell offers to send his car for Jean the next evening, and she accepts, seeing a chance to spite Linda by stealing her “Aunt Susan,” as they call him. However, Terry challenges her by asking if its really worth it. Meanwhile, Kay has set her heart on playing the role of Jeanette in Mr. Powell’s new show, Enchanted April. She has learned and lived the part. All her hopes and dreams are tied up in getting that part. She has gone without food for long periods of time to avoid being thrown out of the boarding house, since she can’t afford to pay her rent. Jean and most of the other girls know about the sweet girl’s desires, but Mr. Powell won’t give his former discovery an interview. Little do the Footlights Club girls know that Terry Randall is really the daughter of Henry Sims, the wheat king. She wants to break into show business, and her father is allowing her to have a try. She has agreed to return to the family if she is a failure. However, Mr. Sims decides to speed up the process by taking fate into his own hands and buying an opportunity for her. Will Mr. Powell cast the right actress as Jeanette in Enchanted April? Will the talented actresses get the chances they deserve? Which of them will survive the ruthless theater without hurting or being hurt? Watch the movie to find out!

Like the Footlights Club, the cast of Stage Door is an interesting assortment of actresses. There are current leading ladies, past greats, and future stars. Katharine Hepburn and Ginger Rogers were very successful film actresses when this movie was made. There also are some older women who were stars in their youth. The flamboyant Miss Luther is played by Constance Collier, who was a star of the stage and a silent film actress. In addition, this movie is a really interesting opportunity to see multiple famous actresses before they achieved fame. Among the boarders are Eve Arden as a sarcastic girl with a cat as a constant companion, Lucille Ball as a young hopeful from Seattle, Ann Miller as Jean’s tapdancing partner, and even an extra role played by Frances Gifford. Lucille Ball has a lumberjack beau who is played by a very young Jack Carson, too. A great cast makes this hour-and-a-half-long movie full of action yet fast-moving.

This is a perfect Code film. People often refer to the fact that movies became more dramatic, dark, and serious in the post-war 1940s and the 1950s. However, these people must have never seen Code films from the 1930s such as Stage Door. It features just as much maturity, drama, seriousness, complexity, and challenging topics as any pre-Code or post-Code film. However, its handling is completely clean and decent. Thus, the stirring message and story is acceptable for viewing by all audience members.

In the 1930s, Adolphe Menjou was the stereotype for the suave older man who used his money and charm to woo younger women. Thus, he was perfect for the role of Anthony Powell. In this film’s first scene, the situation with Mr. Powell and Linda is introduced. It is always mentioned discreetly. We know, from conversations between Linda and Jean and scenes we actually see, that Mr. Powell gives expensive gifts to young ladies, sends his car for them, has dinner with them, wines and dines them at his flat, and promises them roles on Broadway. Both times we see Mr. Powell entertaining women at his lavish apartment, he is giving them plenty of food, wine, and charm, but it never goes any farther than that. We never even see him kiss any woman. His butler, Harcourt, is always a chaperone as he serves them. Earlier in the film, one really wonders about Mr. Powell, since he openly speaks about his wife and son. However, for the sake of our Code discussion, I must reveal the fact that Terry later confronts him about his family. She destroys his convenient myth by saying that she knows the pictures he has are of models for a face product and a military academy. Thus, we realize that Mr. Powell simply invented the story about being married to keep women from wanting to marry him. Mr. Powell is far from a good, honorable gentleman. He is clearly a cad, even though he isn’t married. However, he is never depicted as anything but a cad. He is a cold, ruthless person with no more heart than morals. He acts only for his own pleasure and convenience. The situation is handled too delicately to bother the sensitive or corrupt the immature. However, the point about his empty, shallow life is very poignantly made.

This movie depicts some heartrending messages about selfishness, generosity, and success in the theater. It also teaches valuable lessons. It teaches that compromising your values, as several women did with Mr. Powell, doesn’t guarantee success. It also teaches that you can’t buy talent or the right to be onstage. Finally, it teaches that no part, job, or opportunity is good enough to justify heartlessness and cruelty. Only thinking about yourself is the cruelest thing you could do to yourself. By only thinking about yourself, you can completely alienate yourself from all other human beings. This movie paints a really realistic painting of life for aspiring actresses. The heroines in this story must all realize that patience and sympathy are the only things which can bring anyone success as an actress.

This movie has some very serious elements and themes in it. Many of these topics would be considered “adult” themes today. If this movie was made in any time besides the Breen era, all these mature topics would have been exploited, emphasized, and heightened. Thus, this movie would have undoubtedly received a PG-13 rating. However, there is nothing in it which is not appropriate for young people. Why shouldn’t the youth see something mature and serious once in a while? We all live in a serious world. Perhaps our young people wouldn’t be so immature these days if they were influenced by mature by decent content. By thinking and feeling serious things like the topics addressed in Stage Door, a lot of modern people could develop a deeper side. 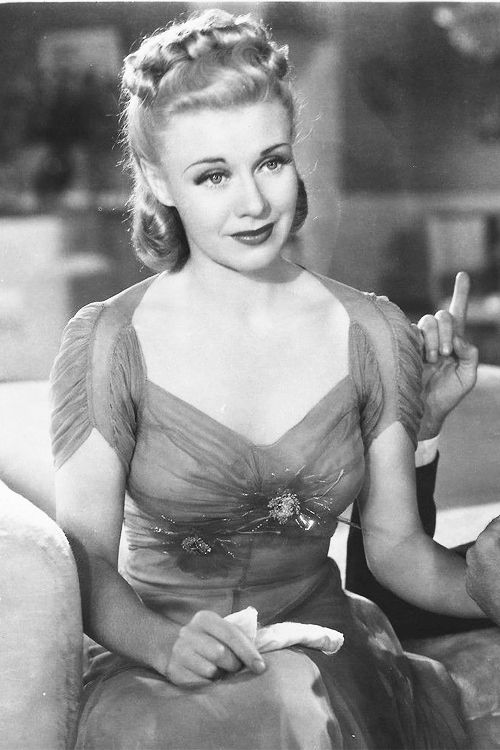 This is one of my favorite movies with Ginger Rogers. I think she really displays the full range of her emotions in this film. She plays a sarcastic, bitter young woman very well. However, she is not completely hardened. She still has a soft side, especially toward Kay. As the film progresses, you feel that she wants to be friends with Terry, but the tension between them remains because she is determined to be sore at the world.

You also get to see Miss Rogers’s dancing in this film. She and Ann Miller tap dance together at the rehearsal and in the Club Grotto. As usual, her tap technique is very precise and accurate. Her dancing was very rhythmic and unique in terms of style. Unlike her movies with Mr. Astaire, she doesn’t do any fluid ballroom dances in a long evening gown. However, I think that she preferred doing this kind of role.

If you have only seen Ginger Rogers’s movies with Fred Astaire, it’s time for you to broaden your horizons. Stage Door is a wonderful film for you to see if you want to see her acting at its most dramatic and serious potential. I heartily recommend it to all people who appreciate excellent classic films.