Today is the second day of #CleanMovieMonth.  Here at PEPS, we have dedicated July to celebrating the sealed cinema of the Breen era. In honor of this celebration, I am writing about a different Code film every day of the month. Yesterday, I began the festivities with an article about a light-hearted modern musical from Universal Pictures, Three Smart Girls from 1936. That Code film taught us about good youthful role-models and the importance of films glorying the family.

Today, I am turning my attention to a film which was made three years later by Warner Bros, The Private Lives of Elizabeth and Essex. Unlike yesterday’s selection, today’s film is an intense historical drama with Bette Davis, Errol Flynn, and Olivia de Havilland. With direction by Michael Curtiz and production by Hal B. Wallis, this movie was a dramatic Technicolor extravaganza which evidently spared no expense in lavish historical costumes, sets, and intensity.

During this month-long celebration, I am using my daily posting as an excuse to participate in a lot of excellent blogathons hosted by my fellow classic film-lovers. Today, I am using this article to participate in the Third Annual Olivia de Havilland Blogathon, hosted by Crystal Kalyana of In the Good Old Days of Classic Hollywood and Phyllis of Phyllis Loves Classic Movies. In honor of Dame Olivia de Havilland’s 102 birthday, which she is remarkably still alive to celebrate, I am writing about The Private Lives of Elizabeth and Essex, a movie in which she has a small but important supporting role.

Robert Devereux, the Earl of Essex, has just returned from an expedition to Cadiz. He is a young, handsome, and popular general who is beloved by the English people. In particular, he is deeply loved by Lady Penelope, a beautiful young noblewoman of the court who is jealous because of his favor with and attentions for the queen. However, Queen Elizabeth is currently very angry with him because he did not acquire the treasure from Spain which he promised to secure. She feels that he acted for his own glory instead of the good of England. The sixty-year-old queen is powerful, bitter, and very sensitive about the fact that youth and beauty are no longer hers. There is intense friction between her and Essex which springs from the deep love between them. However, their moments of affection and tenderness are quickly followed by ones of anger and hatred. Elizabeth fears that Essex doesn’t return her deep love for him, wondering if so young a man could love a woman as old as she. She both adores and mistrusts him, since she is afraid that he only pretends to love her to gain power and favor. Meanwhile, despite his love for her, Essex disagrees with many of Elizabeth’s policies on ruling, since he himself has very strong ideas about the future of England. Can their love overcome the years between them and the crown which divides them, or are they doomed to be separated forever? Watch the movie to find out!

I really appreciated the historical information and accuracy in this movie. I don’t mean that liberties weren’t taken with some of the details of the actual lives of Queen Elizabeth and the Earl of Essex. Rather, I mean that the time and feeling were properly captured. The costumes, the sets, and the dialogue were all very accurate. They really brought me to the 16th century, as I think every historical film should. I was particularly impressed by Bette Davis’s portrayal of Queen Elizabeth. I have read a lot about the Virgin Queen, and I feel that Miss Davis truly brought her to life. Her startlingly white complexion, bright red wig, pearl-bedecked attire, and regal ruffs were beautifully accompanied by her magnificent acting to create a portrait of the queen which was thoroughly convincing. Every other member of the cast wore equally historical and fitting clothing. In an hour and forty-five minutes, this movie brings the relationship of Queen Elizabeth I and the Earl of Essex more to life than many history books could do in twenty chapters. A few facts were changed to romanticize the story, but the spirit is the same.

When I decided to watch this movie for the Olivia de Havilland blogathon, I had my doubts about its Code-compliance due to its many similarities to The Adventures of Robin Hood from 1938, which I find to be an appallingly unCodish film. In addition to some subtle implications in the characterization of Prince John and incorrect depiction of the clergy, The Adventures of Robin Hood is very distasteful to me because of the frequent and graphic violence in it. The excessive blood, prolonged battle scenes, and countless arrows shot into bodies repel me from this movie. My favorite thing about that film is Olivia de Havilland, since she looks absolutely gorgeous in her wide array of medieval costumes. She is lovely in her regal splendor, and I think she gives a marvelous performance. However, I don’t enjoy watching that movie because of the unnecessary violence. It is one of those unfortunate Code films which was obviously poorly self-regulated by a PCA member aside from Joseph Breen. Because of that, it is a “non-Code film;” it received a seal of approval without good breening.

The Private Lives of Elizabeth and Essex and The Adventures of Robin Hood have many shared artists in front of and behind the camera. Errol Flynn, Olivia de Havilland, and Alan Hale act in both. Michael Curtiz directed both films, Hal B. Wallis produced them, and Jack L. Warner was the executive producer. Both were in Technicolor with elaborate historical settings. The Warner Bros. logos at the beginning of these movies look similarly antique. However, the similarities end there.

Code-wise, The Private Lives of Elizabeth and Essex is excellent. I consider it to be a perfect Code film. The battle sequences are very brief, with violence at the minimum. A few men fall in battle, some with arrows in them, but it isn’t distasteful or graphic. Unlike in The Adventures of Robin Hood, I didn’t want to turn away. In addition, I was very impressed by the way the romantic relationship between Elizabeth and Essex was handled. It was quite passionate at times, yet it was always decent. There was kissing and some very romantic passages, but there were never implications of anything immoral. I feel that that was also very important historically, since Queen Elizabeth was famous for being the Virgin Queen, although that was not mentioned in this film.

This movie shows a completely different side of the Code than Three Smart Girls. A lot of people think of light-hearted musicals and youthful pictures when they think about Code films, but the Code also allowed for gripping, realistic drama. This movie is much more dramatic and entertaining than The Adventures of Robin Hood to me, yet it is twice as Code-compliant. In my opinion, that is why it is more entertaining. Anyone can enjoy the wonderful story line and intense acting in this movie, since there is nothing which is objectionable. How often can modern films for general audiences boast such gripping and realistic historical drama? 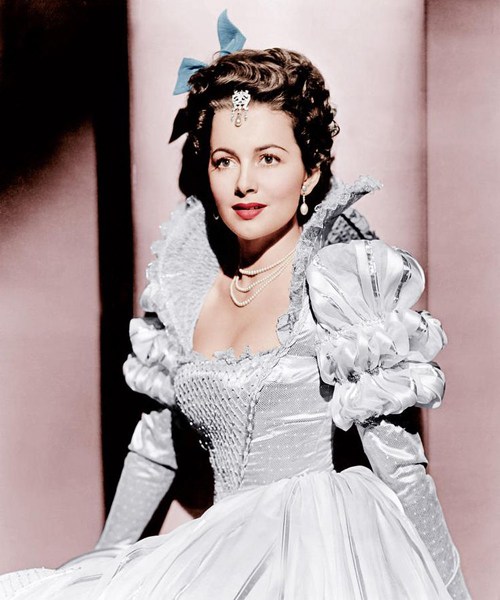 Olivia de Havilland is very beautiful in this movie. She wears three different light blue gowns in the course of the film, and the period attire is very becoming. She gives a very convincing and emotional performance as the jealous young woman who longs for the unrequited love of Essex, the queen’s favorite. She is both sweet and cruel as she reminds the aging queen of her lost beauty. Although her role is brief, it is powerful and memorable. In the last scene, she gives a stirring performance with tears pouring down her face as she pleads with the cold queen. It’s a scene which I won’t forget soon.

Thank you to Crystal and Phyllis for hosting this blogathon and allowing me to participate. Happy Birthday, Olivia! May you have many more and continue to reign as one of the last queens of the Golden Era of Hollywood!

10 thoughts on “Day 2 of #CleanMovieMonth: “The Private Lives of Elizabeth and Essex” from 1939”