This article was written by Tiffany Brannan for the Singing Sweethearts Blogathon.

Why are some films from the greater Breen era (1934-1954) perfect Code films while others are not? All eight of Jeanette MacDonald and Nelson Eddy’s film collaborations were made during this time, yet some of them are undeniably more Codish than others. I Married an Angel from 1942, their final movie together, was made when Joseph Breen was at RKO instead of the Production Code Administration, and Naughty Marietta bares the unmistakable signs of a non-Breen film, but their other six movies are all good Breen films. However, out of these six movies, only the three which Robert Z. Leonard directed are what I consider to be perfect Code films. I will examine Maytime, The Girl of the Golden West, and New Moon to show why these movies are examples of perfect Code films. 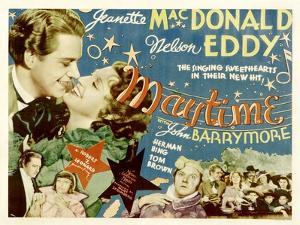 Maytime from 1937, the first picture with the Singing Sweethearts that Robert Leonard directed, is the story of an American operatic soprano, Marcia (Jeanette MacDonald), who falls in love with an impetuous opera student, Paul (Nelson Eddy), in Paris but marries her manager, Nikolai (John Barrymore), out of gratitude. In the original movie idea, their romance occurs after she is married; however, in the final movie, she is only engaged in the climactic May Day scene, so there is no hint of adultery. When the sweethearts are in an opera together seven years later, they are still very much in love, despite the fact that Marcia is now married; however, the Code ensured that the only love scene they perform is onstage in front of hundreds of people. This movie is very romantic without being lustful or suggestive; it shows that marriage is beautiful when it is based on love and truth, but a marriage with neither can be disastrous. The compelling story and portrayals in this movie make you sympathize with the unmarried sweethearts while disliking Marcia’s possessive husband, yet the state of matrimony is never undermined; the romance ends tragically, as it must, since you have the feeling from her wedding onward that she and Paul can never truly be happy together after that. The compensating moral value in the film is that an elderly Marcia advises another young woman to marry the man she loves when she has the chance; the tragedy of her life teaches others not to make the same mistake, which always leads to impurity, unhappiness, or death. 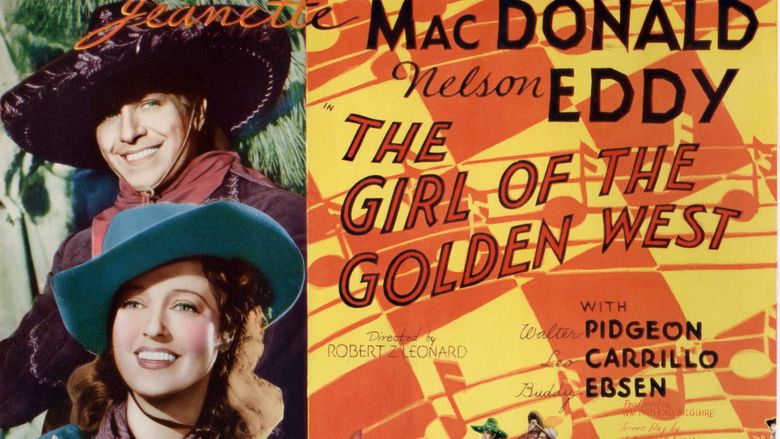 The Girl of the Golden West from 1938, an adaptation of an opera by Puccini with music by Sigmund Romberg, is the story of a female saloon owner, Mary (Jeanette MacDonald), who falls in love with a lieutenant (Nelson Eddy) who is really the bandit Ramerez, whom her sheriff admirer, Jack (Walter Pidgeon), is trying to catch. In the opera, Mary rescues Ramerez at the end by holding the sheriff at gunpoint when he is about to hang her beloved bandit; in the movie, the sheriff allows him to go free because Mary loves him so much, thus keeping the situation from seeming lawless and keeping the sheriff from seeming like a villain. Non-Code bandit films often feature a lot of violence, but this exciting Western doesn’t show a single killing, which is essential because Ramerez reforms and is redeemed at the end of the movie. His sensitivity towards religion and desire for forgiveness from Father Sienna after he has been released show that he has truly changed and that he was never really a hardened criminal; when the priest welcomes him after knowing who he is, the forgiving spirit of Catholicism which was advocated by Joseph Breen and the Code is very inspiring. This story is basically a gangster story set in the Old West, so it could have featured the morally confusing sympathy angle which makes you feel sorry for criminals; however, Ramerez is portrayed as a bandit who turned to robbery because he was raised by bandits and became embittered when his adopted father, the bandit chief, was killed. His character is given the compensating moral values of sensitivity to familial relations, secret donation to the church, and respect for Mary; his reformation at the end seems natural because he clearly never forgot the message of peace which Father Sienna told him in his youth.

New Moon from 1940, the last collaboration of the Singing Sweethearts and Robert Z. Leonard, is the story of a French gentlewoman, Marianne (Jeanette MacDonald), in New Orleans who falls in love with her handsome bond servant, Charles (Nelson Eddy), not knowing that he is really a revolutionary duke in disguise. In the original operetta, the violence and rebellious nature of the French Revolution are emphasized heavily; in the movie, the romance and casting off of tyranny are more important. There are two climactic battle scenes in this movie, but they are brief and reserved while being very exciting, since they dwell on action instead of killing; also, the 18th century-style dresses in this movie feature completely decent necklines, unlike the costumes in Naughty Marietta from 1935, which were more risque than the somewhat questionable dresses that women really wore in that period. Charles and his fellow rebels display the brave desire for equality before God and man that embodied the American revolution, not the humanistic rebellion that embodied the French Revolution in Paris; the courage and manly strength in “Stouthearted Men,” the rebels’ dramatic anthem, is full of the inspiring democratic feeling of America. Later, Marianne and Charles get married, but, due to a feud between them, have a “gentleman’s agreement” to live “under one roof but two ceilings;” when they finally realize that they really love each other, the situation could have been unacceptably suggestive, but it is handled with the utmost delicacy so that it is completely free from offensiveness. The revolutionaries make up for their rebellion by sparing many people whom they could have killed, thus proving that they are merely honorable, courageous men who believe in democracy; in addition, Charles always shows and demands great respect for the priest and the women in their island republic.

Having examined Maytime, The Girl of the Golden West, and New Moon, we see that their dynamic combinations of Code-compliant story lines, lack of objectionable elements, inspiring qualities, proper handling of difficult situations, and compensating moral values make them examples of perfect Code films. Maytime tells the story of a married woman who loves a man other than her husband without undermining matrimony, since it shows that you must marry wisely, since marriage to the wrong person can ruin your life and the lives of others. The Girl of the Golden West tells the story of a charming bandit without undermining law and order, since it does not make his crimes appear attractive; due to the proper handling, you are glad when his good side conquers his criminal nature with the help of the influence of a wise priest and the love of a good woman. New Moon tells the story of French revolutionaries without inspiring rebellion or portraying excessive violence; it merely inspires you to treasure the freedom and equality in the United States of America. Robert Z. Leonard knew how to combine the MGM logo with the MPPDA Seal of Approval to make magic with America’s Singing Sweethearts of the Screen!

Go to the bottom of the roster for the Singing Sweethearts Blogathon to read about my idea for a blogathon all about perfect Code films. If you would like an opportunity to write about a movie that you think the Code made great, leave a comment on that article!

Past Glory: A Midsummer Dream Blogathon!