James Cagney was an actor whose great talent in the film industry made him a movie star for thirty years. After achieving fame through his fourth film, The Public Enemy, Mr. Cagney appeared in around sixty movies before his retirement after One, Two, Three in 1961. His career put him in many diverse genres and roles, since he effortlessly adapted to changing styles of films. When I learned that Realweegiemidget Reviews and Thoughts All Sorts are hosting a blogathon about film events that are separated by twenty years, I decided to write about two note-worthy films in James Cagney’s career, Footlight Parade from 1933 and Mister Roberts from 1955. These two Warner Brothers films, which are separated by twenty-two years, show the changes and consistency of James Cagney, Warner Bros, and Hollywood itself. In this article, I will look at Footlight Parade.

Footlight Parade is the story of a choreographer, Chester Kent (James Cagney), who must stage three magnificent prologues to win a contract with the huge Apolinaris chain of movie theatres. When talking pictures destroyed the musical comedy business, he turned to staging musical prologues which would be played in movie theatres all over the country before the pictures. He struggles to fulfill the demands of his job, since he is receiving no salary for running the business singlehandedly while his partners claim that all the profits are going back into production. On top of that, his prologue ideas keep getting stolen by the competitors. His only helper and real friend is his devoted secretary, Nan (Joan Blondell), who is secretly in love with him. Unfortunately, Nan’s so-called friend, Vivian Rich (Claire Dodd), comes to town and seduces him into giving her a job and proposing to her. Chester is unable to see through gold-digging women. This is a recurring problem for him, since he is already divorced from one wife (Renee Whitney), who left him when he lost his job as a choreographer a few years back. Now that he is engaged to Vivian, his wife has returned to say that she never really got a divorce and to blackmail him for $25,000. When Vivian finds out about this, she shows her true colors and says that she’s going to sue him for breach of promise if he doesn’t marry her. On top of this, he is keeping all the members of his company locked up in the theatre with him for three days so that the information about the prologues won’t leak out before the big show on Saturday night. He is struggling to make the third prologue about water nymphs good, since he fears that it is a “stench bomb.” Chester has a lot of problems by this point. He has to pay off his wife, get rid of his fiancee, keep his prologue ideas from being stolen, fix the bad prologue, rely on a weak leading man for another one, and keep his sanity in addition. He may end up on easy street, or he may land in jail. You’ll have to watch the movie to see how the problems are solved! 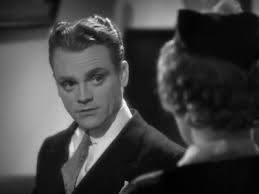 James Cagney’s talents are well-displayed when he plays Chester Kent. He acts, dances, sings, and plays the piano. He gets a rare pre-Code opportunity to play a nice fellow. The extent of his violence toward women is pushing one traitoress out of a dressing room with a shove on the back of the neck. He is very convincing as a man who is working himself into distraction. He may be tired, but he still has some ideas. He gets ideas from very random things. Mr. Cagney displays his usual naturalness in this character. I love the way he dances at a moment’s notice. He dances while he talks, and he doesn’t seem to be thinking about his feet at all. In addition, he does a very convincing, realistic drunk scene. He has as much Hollywood glamour in this movie as in any I know. He is wearing perfectly tailored suits, lots of makeup, and probably lifts in his shoes, since he was rather short. His hair is carefully styled and almost teased to make him look taller and more dapper. I think that he looks grand in that much makeup, since he had very fair features which didn’t show up well in black and white without a little cosmetic assistance. One thing I like about the 1930s is that men were made to look as good as they could. In addition, it helped older actors to look younger longer. Why should women be the only ones to have help with their appearances?

The Warner Brothers, or perhaps I should just say Jack Warner, had a very definite style. In a private letter from the pre-Code years, Joseph Breen called them the worst lot in Hollywood, saying that they had a cheap, vulgar sense of humour. I can’t disagree with him; the Warners were particularly daring and vulgar in some of their pictures. By the end of the pre-Code era, only Paramount was tied with Warner Brothers for the largest amount of scandalous pictures. However, I think the distinctly unique “Warner touch” encompasses more than dirtiness and vulgarity. For one thing, there is a rather singular humour in their movies which I would describe as goofy. I would also call it rather advanced for the 1930s. That sort of humour didn’t become very popular until the late 1950s or 1960s. There is also the matter of background music. By 1931, Warner Brothers had discovered background music, and they used it to excess. They did not, however, just have it to fill up sound like some early filmmakers. They used it to sway the emotions and add extra impact to scenes. Also, they would choose a few themes and continue to use them. Sometimes the background music is a little silly because it seems overly dramatic or too merry for a serious situation. Footlight Parade certainly had both these characteristic Warner touches. The theme of “Shanghai Lil” is played throughout the movie to move the audience to feel sorry for Chester’s plight. I think that moving the audience to an emotional reaction was Jack Warner’s main objective, since he knew that fiddling with his viewers’ emotions meant cashing their feelings in at the box office. At Warner Brothers, movie is an appropriate term.

This film was released in 1933, the last entirely pre-Code year for films. At the time of this film’s release, the Catholic Legion of Decency hadn’t even been officially started. However, Warner Bros. knew that, since the Depression continued to hang over the country, the public was in the mood for something more light-hearted than their usual dark, realistic fare. In response to this feeling, Warner Bros. made three big musicals in 1933. Footlight Parade was the third movie in the set. The movies’ stories were not related, but they shared artistic characteristics, and some actors appeared in both. However, lightness and humour rather than violence and crime doesn’t make a film clean. Crime and violence didn’t appeal to everyone, but almost every picture could have some risqueity. As they said around Warner Brothers, “nearly every picture is improved by a little ginger.”

Footlight Parade had more than a little ginger. I’d say that every reel of the film is heavily flavored with Jack Warner’s favorite spice. Section I of the Code, Crimes Against the Law, was not violated. There certainly are plenty of violations of Section II of the Code, which is the same as ginger. Section III, Vulgarity, is violated by the running joke about Mr. Apolinaris’s bad stomach; Section IV, Obscenity, is violated by the fact that nearly every other line contains a double-meaning, implication, or suggestive quality. Section V, Profanity, is also violated, since forbidden expressions are used, and there is more than one instance of someone starting to say blatant profanity but stopping. Section VI, Costumes, is violated as frequently as Section II; this movie was virtually based around dance numbers with risque costumes. Section VII, Dances, is also violated, since there are some suggestive movements and especially indecent camera angles in many of the numbers. Sections VIII and IX, Religion and Locations, are not violated. Section X, National Feelings, is violated in “Shanghai Lil,” since a Jew is rather mockingly depicted. Section XI, Titles, is not violated, since there is nothing wrong with the title Footlight Parade. However, I’d say that Warner Brothers probably violated this section of the Code more than any other studio in the pre-Code years; they loved to have titles that involved the underworld and sin. The last section of the Code is XII, Repellent Subjects, and it is not violated.

I decided to write about these two specific James Cagney films because of their special timing. Footlight Parade was released on October 21 of 1933. In less than eight months, the Motion Picture Production Code was being enforced by the head of the Production Code Administration, Joseph I. Breen. Mister Roberts was released on July 14 of 1955, exactly eight months after Joseph Breen had officially retired from the PCA. Geoffrey Shurlock, Mr. Breen’s assistant, was now the head of the PCA, but his incompetency in enforcing the Code could be seen immediately. The Code began to weaken greatly after Mr. Breen left, since Mr. Shurlock neither understood nor cared about the Code. I don’t mean to say that all films made after Mr. Breen’s departure violate the Code, since many of them were still Code-compliant. However, this is largely due to the filmmakers’ desires to still comply with the Code. Also, there were other members of the PCA who had a better understanding of the Code than Mr. Shurlock, such as his assistant, Jack Vizzard. Because of these elements, many films in 1955 were still largely Code-compliant. Mister Roberts was not one of them. Jack Warner, who was now the only Warner brother who ran the studio, could not let other studios beat him to the punch of making a new kind of Code film under Geoffrey Shurlock. Many filmmakers began to test the waters with daring things in 1955. I don’t think I have seen another 1955 film which shows the Breen absence as clearly as Mister Roberts does.

Well, this completes the Then portion of my contributions to the “Then (And Now) Blogathon. Read my other contribution, my Mister Roberts article, to see the Now portion and to see my summary of this eight months topic with James Cagney!

3 thoughts on ““Footlight Parade:” THEN: Eight Months Before”