This weekend is the feast of the Food in Films blogathon at Silver Screenings and Speakeasy. I would like to thank my two hostesses for allowing me to join the potluck by serving up my opinions on an epicurean and cinematographic collaboration. For my contribution, I have chosen Sabrina, a swell dish from 1954. What classic film lover could resist including this film with Audrey Hepburn, Humphrey Bogart, and William Holden, plus Billy Wilder’s direction, in his diet? Without further ado, let the meal begin!

Sabrina Fairchild (Audrey Hepburn) is the chauffeur’s daughter at the Larrabee estate on Long Island. She is a

romantic, shy girl of about twenty who is heartbroken because she has been in love with the employers’ younger son, David Larrabee (William Holden), all her life. Even though he is a carefree playboy who has had three wives and scores of girlfriends, he thinks that Sabrina is just a funny little kid.

Mr. Fairchild (John Williams)has decided to send his daughter to Paris to go to the finest cooking school in the world, but she is miserable. She doesn’t want to go to Paris; she decides that she wants to die instead. When her father is asleep, she goes into the garage, shuts the doors and windows, and starts the motors of all eight cars. She isn’t too serious about suicide, since she opens one window when she starts to cough from the exhaust. One window may not save her with eight cars, however. Suddenly, the doors open, and

Linus Larrabee (Humphrey Bogart) starts calling for her father. Between coughs, he manages to turn off the cars, find Sabrina, and bring her upstairs. Linus is the older Larrabee son; he is a middle-aged businessman who is interested in corporations and mergers instead of dancing and champagne. Sabrina convinces him that she was just checking the spark plugs, not trying to do away with herself. She doesn’t have the nerve to try to kill herself again, so she goes to Paris. During her two years in the French capital, she learns more than how to make souffles and vichyssoise; she learns that you can’t run away from life and love. When she 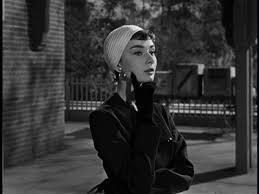 returns to Long Island, she has a new, stylish haircut and some wonderfully glamorous Parisian clothes. David drives past the train station and, not recognizing her, offers her a lift. Once he realizes who she is, his attraction doesn’t lessen. He is smitten with her. However, neither Mr. Fairchild nor the other Larrabees approve of this fraternization between classes. There is another problem, too. During Sabrina’s absence, Linus arranged an engagement between David and the daughter of a sugarcane manufacturer, forming a very fine merger which will enable the production of a new Larrabee plastic made out of sugarcane. Linus is a businessman who will go to great lengths to keep his plans intact. Since Sabrina can’t be bought out of the situation, he must court her himself. While David recovers from sitting on two champagne glasses that were in his back pockets, Linus goes sailing, dining, and dancing with Sabrina every day. He tells her stories about being lonely and lovelorn, and she begins to sympathize with him. She decides that he needs to go to Paris, but he says that he would need her to go with him. His plan is to make her think that they are both going to Paris on a ship called the Liberte but to not show up on the boat. He would compensate by giving her flowers, presents, an apartment, a car, $50,000 in credit, and even some stock for her father. When she finds the ticket in his office one evening, however, he doesn’t have the nerve to stick to his cold plan. He tells her that he wasn’t going to join her, so she sadly takes one ticket and leaves. It must be noted, however, that David still wants to marry her. How will Sabrina’s situation be resolved? Will she go away with David, even though she loves Linus? Will she stay around in hopes that Linus learns to love her? Will she go to Paris alone? Well, you’ll have to watch the movie yourself to find that out!

A dish is only as good as its ingredients, and a movie is only as good as its actors. This movie has a wonderful mixture of flavors as the two famous actors play off the young, beautiful starlet. Of course, good ingredients need a good recipe, just as good actors need a good script; these ingredients were displayed at their very best because of the excellent recipe, which coordinated their flavors and talents beautifully. However, good ingredients and a great recipe are not enough; a dish needs a great chef to put them all together, just as a movie needs a great director. This is undoubtedly one of my favorite Billy Wilder dishes. It has delicious flavors, a lot of subtlety, and, best of all, very little ginger. Ginger, in this sense, is a synonym for Section II of the Code and it in the 1920s. Too much ginger make a dish too hot, and it often overpowers the good flavors of the food. I’m sure Hollywood’s board of health, which is the Production Code Administration in this case, was pleased by Mr. Wilder’s restraint with this film.

Sabrina was Audrey Hepburn’s second American picture; it was her first picture after her Academy Award-winning American premier in Roman Holiday. This movie was released throughout America on October 15 of 1954, exactly one day after Joseph Breen officially retired from being the head of the Production Code Administration. As such, it was one of the first if not the first film to be released when Mr. Breen was no longer the PCA director. Of course, I’m sure he was involved with the self-regulation of this picture, since it was undoubtedly sealed before his departure. However, he was no longer involved with every picture by 1954, since he was retiring. Aside from a few slightly suggestive lines, this is a very Codish picture. It seems especially clean when you consider the fact that Billy Wilder produced, directed, and co-wrote it. As in The Emperor’s Waltz from 1948, Mr. Wilder was more interested in making a really good picture than scandalizing people.

Most of the cooking in this movie is shown in the Parisian cooking school. The first class shown is Sabrina’s second. The curt, comical French chef says that the students have learned the correct way to boil water; they are now ready to learn how to crack an egg. “It is all in zhe wrist,” he informs them. One must not torture an egg, we learn; it is a living thing, so one must be merciful. “One, two, zhree, crack; new egg.”

Later, Sabrina is shown in the souffle class. As the souffles are spending their final moments in the oven, the chef informs the students that souffles must be light and gay, like to butterflies dancing the waltz. When he reviews the newly emerged souffles a few minutes later, he finds very few to be up to this standard. He glances at each offering, saying that one is too high, one is too low, one is too pale, etc. The second to the last is a “superb” souffle made by a wise, elderly baron; it is the only souffle with which the chef is pleased.

His is directly followed by Sabrina’s; the chef takes one disapproving look at it and says, “Much, much too low.” The baron tells her that she is unhappy in love, so she forgot to turn on the oven. He gives her the advice she needs to return to Long Island as a glamorous woman. Back in New York, Sabrina and Linus decide to have dinner in his office. There is a complete kitchen but rather limited ingredients. She prepares to make a meal out of olives, soda crackers, and several cans of tomato juice. She contemplates a souffle made out of crackers. Thankfully, she finds some eggs, too. The meal is never made, but she gives some interesting discourse on the culinary arts. I hope you enjoyed my little contribution to this delicious blogathon. If you have never sampled Sabrina, be sure to try it now. If you have tasted it before, turn on the television and warm it up again. A good dish is worth having twice. Bon appetit!