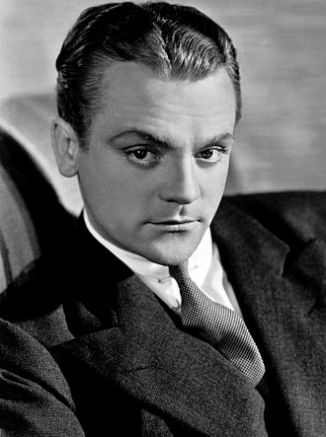 James Cagney and Doris Day were a great team. There was a special magic when they worked together. Perhaps it was because they were very good friends. She had a lot of respect for his talent and experience, saying that he was the most professional actor with whom she ever worked, and he respected her, too. Some people have compared his relationship with her to his relationship with Joan Blondell, his best friend and frequent costar in the 1930s. However, unlike Joan Blondell, Doris Day made only two pictures with James Cagney. For the Duo Double Feature Blogathon, I am going to explore the brilliant, untapped possibilities of Cagney and Day, the perfect film couple that never got together.

Mr. Cagney’s first picture with Miss Day was The West Point Story, a Warner Bros. musical    from 1950. It had been two years since she had started with the Warners, and

it had been twenty since he had, but they were great together. There were plenty of opportunities for them to sing, dance, act, and display their fiery chemistry. However, in this movie, they are just friends; he is her former manager, who ends up with Virginia Mayo while she ends up with Gordon MacRae. I have always found this romantic conclusion to be a little disappointing, since I think Jimmy and Doris fit together better than he and Virginia do. Despite her pairing with him in two movies, there is something about Virginia Mayo’s personality that does not fit with James Cagney’s to me. She said that his brilliantly insane acting in White Heat scared her a little, and that indicates that they were not very close off screen. Doris Day understood that he was just a good actor.

Their second and, unfortunately, last picture together was Love Me Or Leave Me, the 1955 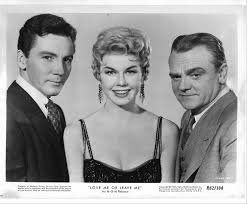 film which tells the story of Ruth Etting’s life. Strangely, even though both the leading actors were Warner Bros. actors around this time, MGM made this picture. I find it ironic that MGM made a gangster film with James Cagney and Doris Day, but the filmmakers originally were considering actors from their own studio. Many praise this role as Doris Day’s finest acting job; if they mean that she summoned her greatest acting powers to play the nastiest role she possibly could, I agree. She succeeded in being totally unlike her usual, sweet self. James Cagney’s acting, as usual, is brilliant in this picture. He fought to get Doris Day this role, and he was right in his belief that she could handle the uncharacteristically dramatic and hard role. I don’t like this role for her because I don’t like to see her playing such a hard character, but I have to admire her excellent acting. This movie really isn’t Ruth Etting’s story, and its not a very accurate portrayal of the 1920s and 30s. On the other hand, if I look at it as just any gangster film and forget that it is supposed to be based on a true story from the 20s and 30s, I have to admire the acting in it and the strength of the “sympathy angle.” The pre-Code feeling of disliking a gangster’s woman but pitying the gangster himself is at full force here. Doris Day’s and James Cagney’s characters are technically a couple, since they are married for a good portion of the movie. However, from any viewpoint, the leads are hardly loving sweethearts. His feelings toward her begin as gangsterish lechery but chance to true, deep, possessive love. Her feelings begin as suspicion and change to gratitude and a degree of fondness, but they turn to complete contempt after their marriage. 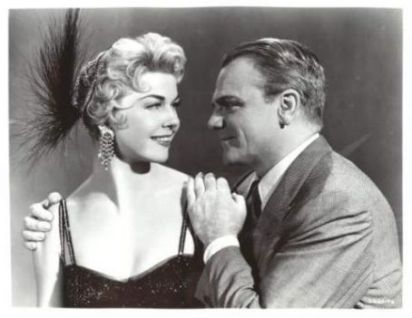 There are a couple of scenes during the early part of Ruth’s success, before they are married, where one can see a little bit of the fondness which really characterized their relationship. If you would like to read about my ideas for a historically accurate film about Ruth Etting which could have been made, be sure to come back during the Breenathon, October 13-15, to read about my proposed movie, Mean to Me.

Whether or not they were romantic, affectionate, or even friendly in a picture, James Cagney and Doris Day acted really well together. They had a natural chemistry which added something to scenes of friendship, romance, anger, or any other situation. The fact that she was twenty-three years his junior doesn’t make any difference. He didn’t look like he was over fifty in their two movies. His slighter stature, indefatigable personality, high voice, delicate Irish features, and inexhaustible energy made him seem much younger than he really was throughout his entire career. Doris Day’s perky, cheerful exuberance fit very well with his lively, leprechaunish charm. Plus, they both had great musical talents. He was famous for dancing, and she was famous for singing, but she could also tap dance well, and he knew how to sell a song. Also, he could play the piano to accompany her singing. They seem like a perfect couple. Here are some pictures of them together: 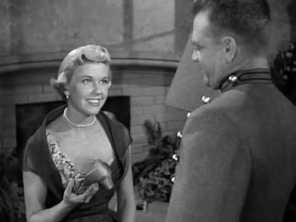 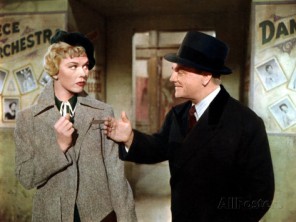 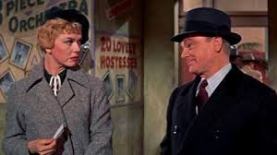 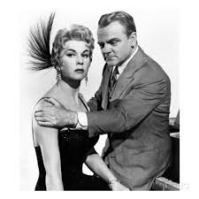 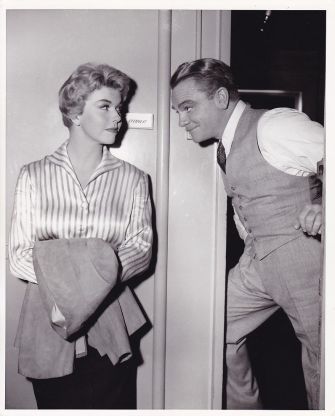 There were many artists who would have been great together but were denied the opportunity of being frequent costars because they belonged to different studios or because they were popular at different times. Was this the case with James Cagney and Doris Day? No! Doris Day made her film debut at Warner Bros. in 1948, and James Cagney, who worked for Warner Bros. on and off throughout his career, returned to Warner Bros. in 1949 after a period on his own, since his company, Cagney Productions, ran out of money. Thus, Cagney Productions became a unit of Warner Bros. studios, and Mr. Cagney acted for the studio again. For the next six years, Miss Day and Mr. Cagney continued to work for Warner Bros. Doris made fourteen musicals, but Jimmy was only in one of them. They did both make a brief appearance in Starlift, a wartime musical from 1951, but only as unfortunately short cameos. Why were they not in more Warner Bros. musicals together? Well, in 1931, the Warner brothers decided that James Cagney was a tough guy gangster actor. Because of this stereotype, he only appeared in three Warner Bros. musicals in as many decades. Jack Warner made most of the decisions for the studio, and he was a stubborn, impulsive man who never rethought his decisions. However, he himself stated that his decisions were right only 51% of the time. The briefness of the Warner Bros. pairing of Cagney and Day is obviously part of the 49% when he was wrong.

The possible scenarios for movies with James Cagney and Doris Day are extremely numerous, but I will list some of which I have thought. Obviously, they would be great as a musical team under many circumstances, whether they played spouses, sweethearts, or just friends, at least in the beginning. Imagine the following possibilities. 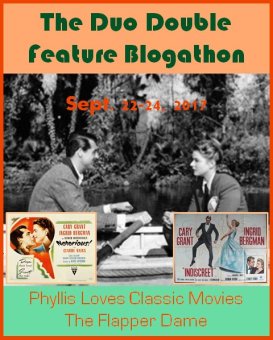 I hope you enjoyed reading my hypotheses for movies which could have featured James Cagney and Doris Day. I certainly enjoyed writing this article. The Duo Double Feature Blogathon, which was hosted by The Flapper Dame and Phyllis Loves Classic Movies, is a 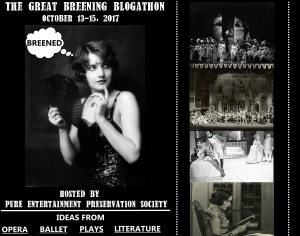 wonderful idea which has generated a lot of creative thought. By the way, one good blogathon deserves another, and all these interesting ideas about movies which could have been made in the Golden Era would make great articles for The Great Breening Blogathon, which I am hosting. If anyone would like to write a Breenathon article based on one of the ideas I mentioned, I would not accuse him of plagiarism. I would be thrilled to have some bloggers write about their own classic movie ideas! Thank you again to my gracious hostesses for allowing me to participate. It was grand! Although we can never actually see the movies which might have been, it is great fun to imagine how marvelous they would have been!

13 thoughts on “James Cagney and Doris Day, The Perfect Couple That Never Got Together”