Today is Saturday, so it’s time for the next article in the 100 New Code Films series. This series is about discovering movies which we have never seen before. There are so many wonderful Code movies out there which we have yet to see. This series is our way to commit to watching a lot of the American Breen Era (1934-1954) movies we haven’t seen yet during 2020. There are so many actors, directors, and producers whose work we have only begun to explore. By watching and reviewing two new movies in all but four weeks, I will watch 100 new Code movies in all this year. 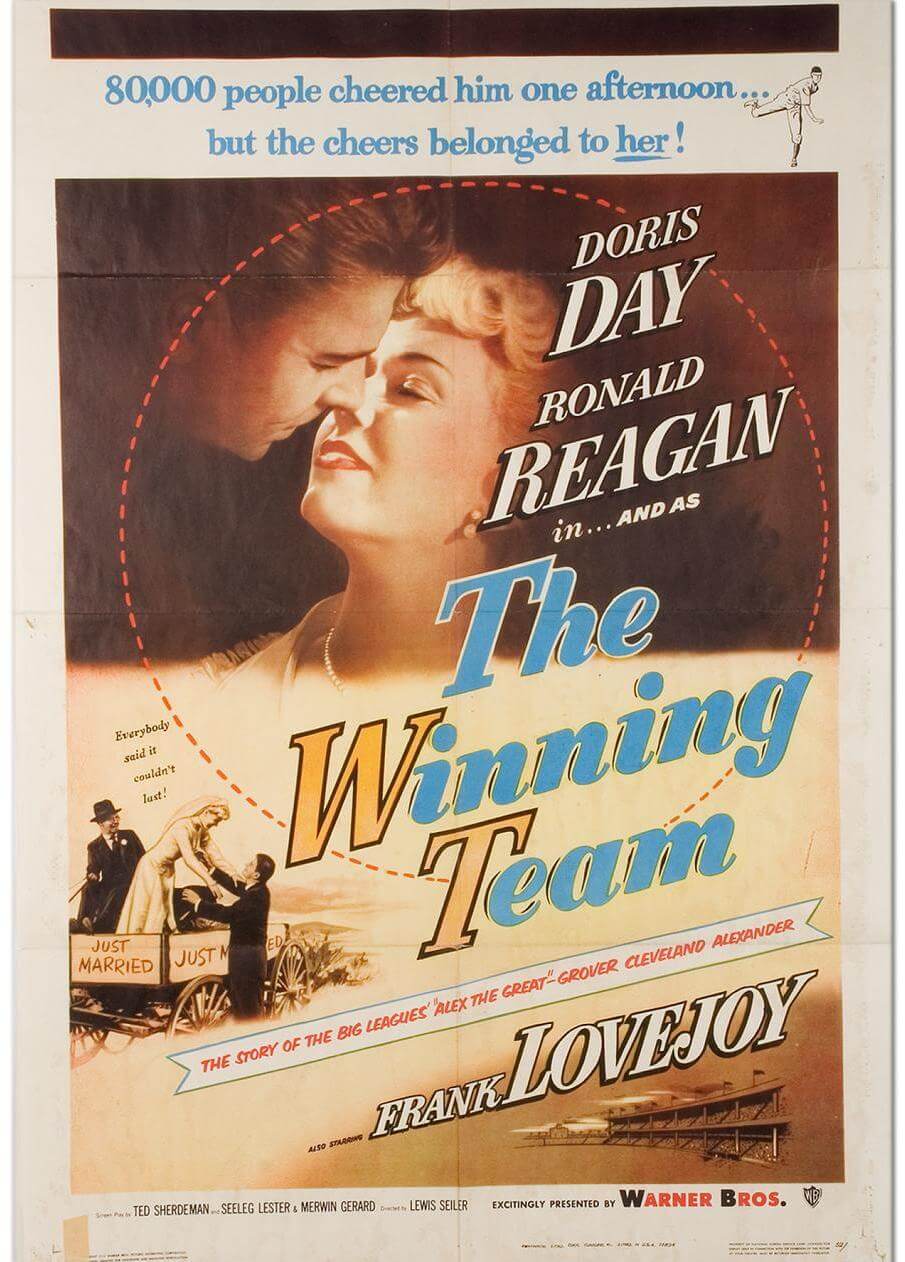 Today’s topic is The Winning Team from 1952. I signed up for The Fourth Annual Doris Day Blogathon as soon as I heard about it, agreeing to write two articles. Yesterday, I wrote a Film Fashion Friday article about a costume Doris wore in My Dream is Yours from 1949. The other topic I chose for this blogathon is a review of one of Doris Day’s Code films which I hadn’t seen yet. I realized I have seen all of her Code movies except two, both of which feature Ronald Reagan. I decided to review this as my new Code film for the blogathon. We bought this on Amazon Video and watched it on Thursday. 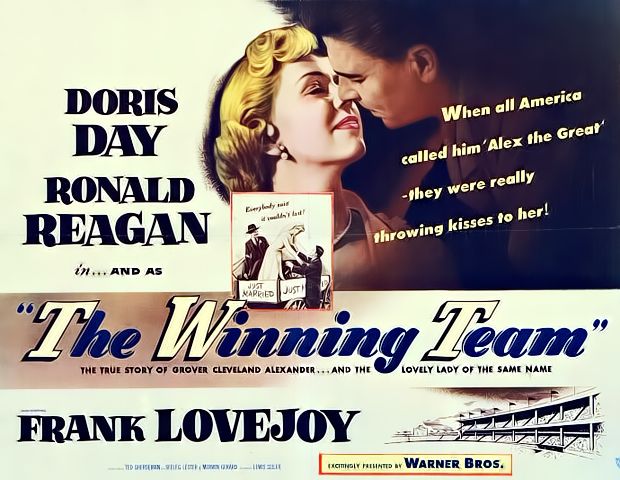 A young man works for a telephone company to save enough money to put a down-payment on a farm so he and his sweetheart can get married. However, he skips his date with her to pitch a baseball game against a professional team. Afterward, he vows to regard baseball as only a hobby, but he breaks his promise the next day when he accepts an offer to play baseball all summer, since the money will be enough for their down-payment. When he is hit in the head by a baseball, his double-vision makes everyone think he will never pitch again, so he marries his girl and buys the farm. A miraculous recovery brings him back into the game, doing what he loves. Only his wife’s dedicated love can help him through the difficult times ahead to victory. 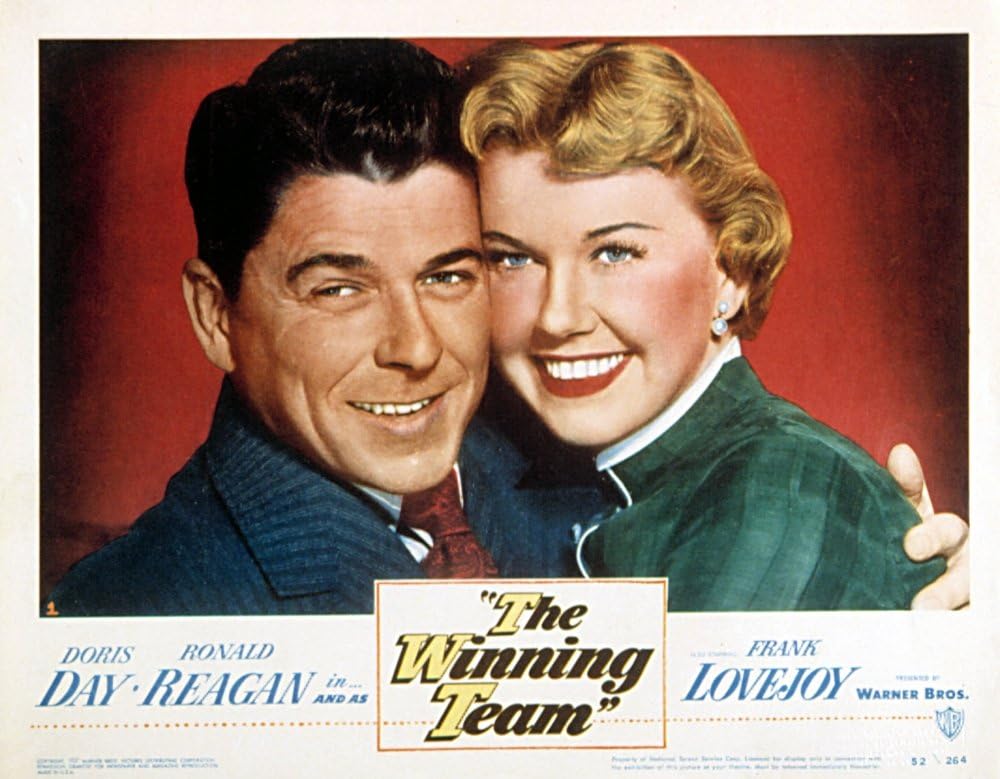 This is a good Code film. It is wholesome, decent, and totally Code-compliant throughout. There is nothing objectionable in this movie. Even during all the trials and tribulations which Grover Cleveland Alexander (Ronald Reagan) endures, there is never the slightest objection. This movie says it all without swearing, vulgarity, risqueity, or anything which is unacceptable. It doesn’t need those untoward subjects to be entertaining and tell a great story. After eighteen years of the Code, filmmakers knew how to make great movies like this one without the inappropriate content which they found so necessary in other times. When you have actors like Doris Day and Ronald Reagan, who needs profanity for intensity or drama? 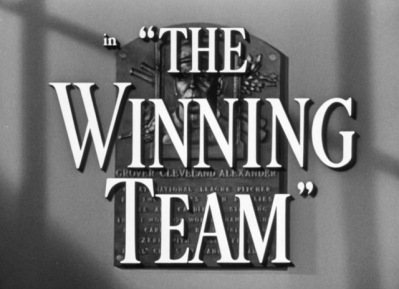 I highly recommend this film to my readers. Although this movie is all about a baseball player, you don’t have to be a sports fan to enjoy it. The story of this great player’s life is really the focus of the film. This movie stars Doris Day, but it isn’t her standard Warner Bros. musical. She only sings one formal song, and earlier she sings “Take Me Out to the Ballgame” a capella. You don’t have to be a musical fan to like this movie. Doris Day gives a wonderful performance, being very dramatic, sweet, and faithful throughout the movie. Ronald Reagan is wonderful as the baseball player who loves the game almost as much as he loves his devoted wife, Aimee (Doris Day). I have seen Ronald Reagan in some supporting roles and have always found him to be excellent. However, this is the first film in which I have seen him play the leading man. He is wonderful in this role. I am so impressed by his acting. He is extremely convincing in the scenes when his character is experiencing physical ailments. He squints and shakes his head so realistically that one can really believe that he is seeing double of everything. Also, he is convincingly athletic in the part. I don’t know how much stunt-double use is included, but I always believed that he was throwing the great pitches. The rest of the cast is marvelous, as well. Inclusion of real footage from old baseball games added authenticity. The costumes and historical details gave the film a feeling of being from an earlier time. This is a wonderful movie. It is dramatic, but not too dramatic. It is also uplifting and really enjoyable. I think that any classic film fan would like it! 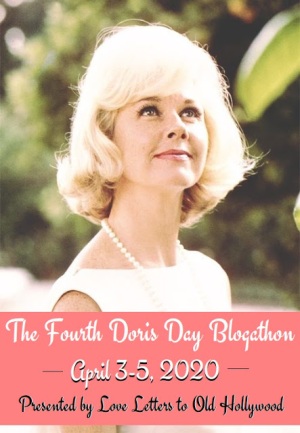 This is my second contribution to The Fourth Annual Doris Day Blogathon, presented by Love Letters to Old Hollywood. We often think of Doris Day as primarily a singer, but she was a great actress as well. In this film, she proves that. She is so emotional and loving as Alex’s wife, who gives him strength when his own fails. She plays this role as movingly as any actress noted just for her dramatic performances could. It is an added bonus when she sings “Ol’ Saint Nicholas,” a charming Christmas song, at a holiday party. As always, her voice is lovely and full of sparkly joy. I have heard her sing this song before on the radio during the Yuletide season, so I was pleasantly surprised to learn that the tune comes from this movie. She looks lovely in this film. She convincingly ages as the movie progresses. Her costumes reflect not only her maturing but changing American fashion. When the movie begins, she is adorable in 1911 styles, which make her look so cute and young. It’s hard to believe that she’s almost thirty. As the years progress to the World War I era and beyond into the 1920s, her clothes, hairdos, and even maturity progress, making us believe that time is passing. Her affection for Grover is so real, perhaps because she really dated Ronald Reagan. (If he had proposed before Martin Melcher did, as he was contemplating, perhaps Doris would have been a First Lady!) In this film as in all her other Code movies, Doris is sweet, wholesome, and delightful. If you are a fan of this talented actress, you should watch this movie. It is a treat! Happy Birthday, Doris! 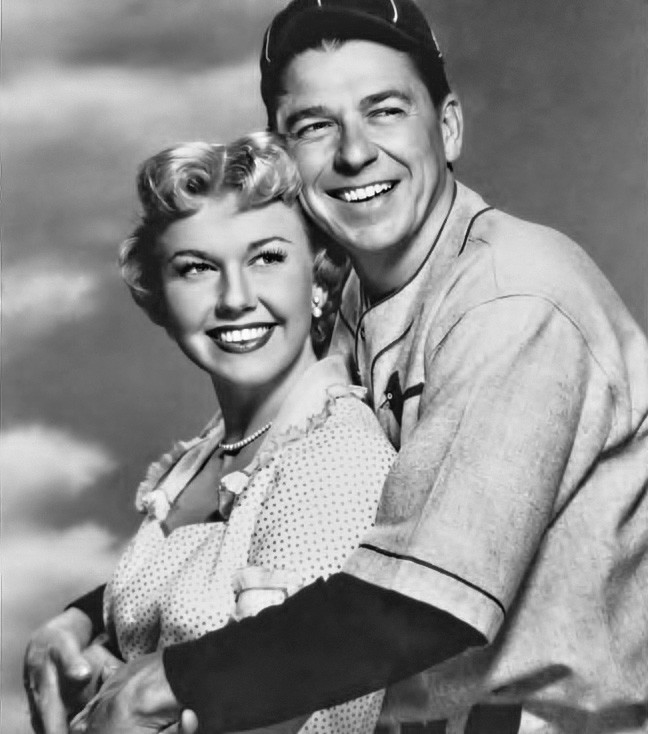