Today is Sunday, so it is time for my next article in our weekly series 52 Code Films. On this Easter Sunday, I am publishing my article about the new Code film I saw this week. Every week this year, I have committed to watching at least one new Code film. I created this series to help me explore and discover new movies from the American Breen Era (1934-1954) which I can enjoy and review. I am now on my sixteenth week. I have really enjoyed this series so far! I hope that my readers have, too. Today’s topic is Double Dynamite from 1951. We have had this film on a Young Frank Sinatra DVD set for years. However, I have never watched it. For this week’s new Code film, I decided to see this Frank Sinatra musical comedy. We watched this movie on Wednesday night.

A young bank teller is engaged to a beautiful co-worker, but their low funds make him reluctant to set the date. He asks his grouchy manager for a raise, but he is turned down. At an Italian restaurant, the young couple receives mixed advice from their philosophical, wisecracking waiter friend. Because of his encouragement to live life dangerously, the young woman wants to get married right away, despite the fact that they don’t have enough money. When the conscientious young man hesitates, she storms out. Back at the bank, she agrees to go on a date with the lecherous son of the bank’s owner, who has been pursuing her for quite some time. Meanwhile, the dejected bank teller happens to witness a man being beat up by a couple of thugs. He comes to the stranger’s aid, and the man in sunglasses takes him back to his shirt shop. He quickly realizes that the man he assisted is a bookie. The timid teller turns down the $1000 the racketeer wants to give him for saving him from the two assailants. Thus, the grateful man places the money on a horse for him via telephone, multiplying the funds considerably. The young man wants to leave, since he doesn’t believe in gambling, but before he knows it he has won $60,000! He reluctantly leaves with $40,000 in cash and a promise to receive the rest later. However, after he gets over the shock, he decides that he now has his chance to marry his girlfriend and quit the job he hates. Little does he know that a shortage of $75,000 has just been discovered at the bank. While he is buying a convertible and a mink coat, the bank manager is giving a stern warning to all employees that a detective agency is observing all of them for suspicious behavior, especially frivolous buying. As soon as the young man realizes that someone is suspected of embezzling, he knows he has to hide his newfound wealth. He confides in his waiter friend, who agrees to help him even though he suspects him of the crime. His girlfriend refuses to believe his story of innocence. As a decoy, the teller loans the greedy waiter the money to store for him in an inconspicuous bank. Trouble ensues when his strongminded friend enters the bank where our hero works, pretending to be an eccentric millionaire who wants to deposit $30,000 but insists on speaking with the never-present bank owner. Soon, the farce has the waiter living like a millionaire in an expensive suite, entertaining the bank owner with champagne and caviar. Will the young bank teller ever be able to claim his fortune and convince his fiancée that he didn’t steal it while staying out of jail? 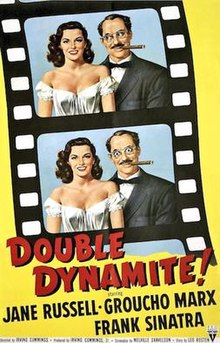 The bank teller is Johnny Dalton, played by Frank Sinatra. His fiancée is Mildred “Mibs” Goodhue, played by Jane Russell. The waiter is Emile J. Keck, played by Groucho Marx. The bank owner’s son is Bob Pulsifer Jr., played by Don McGuire. The bank manager is J. L. McKissack, played by Harry Hayden. The bank owner is R. B. Pulsifer, played by Howard Freeman. The owner of the Italian restaurant where Emile works is Mr. Baganucci, played by William Edmunds. 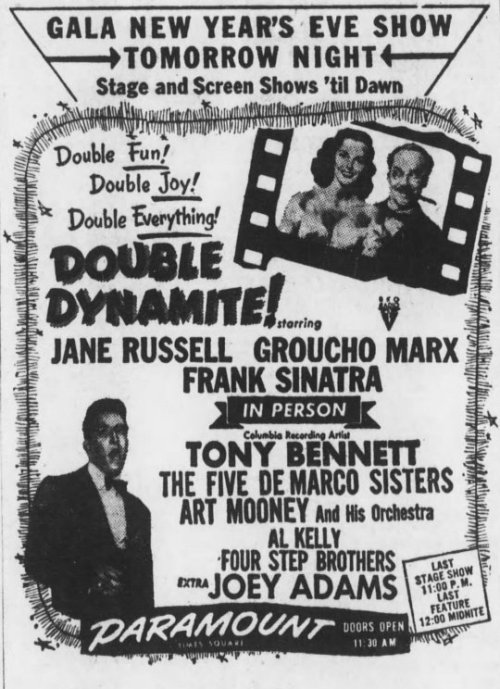 This movie was directed by Irving Cummings. It was produced by Irving Cummings, Jr. The production company was RKO Radio Pictures. The screenplay was written by Melville Shavelson. The story was by Leo Roster, based on a character created by Mannie Manheim. Additional dialogue was written by Harry Crane. This movie features two new songs by Jule Styne and Sammy Cahn, “It’s Only Money” and “Kisses and Tears.”

This is a good Code film. It is wholesome and decent throughout. There were some potential opportunities for shenanigans, but they were happily untapped. Groucho Marx was famous for being a “dirty old man,” noted for his eye-brow wiggling, double entendres, and lecherous behavior. In this film, his jokes are clean, and his conduct is not licentious. He is thoroughly amusing without any such unacceptable behavior. Jane Russell was famous for exposing her voluptuous figure in her breakout film, Howard Hughes’s The Outlaw. In this movie, none of her necklines are anywhere near being exposing or indecent. All her costumes are very decent and fully-covering. They highlight her figure flatteringly without exposing her person. Even in a brief shower scene, she is not indecent. This is a far cry from what the advertising material suggests. The posters feature sketches of Jane Russell in her infamous off-the-shoulder blouse from The Outlaw. The slogans and taglines are focused on a double theme, including the title. I initially tried to dismiss the nagging idea I had about the title’s implication about Miss Russell’s figure. However, when I saw the tagline “double exposure,” I was certain that the implication was no coincidence. I am very surprised by this cheap, vulgar advertising campaign. It doesn’t fit this film at all. I think it is because of this movie’s late release. It was made in 1948 as It’s Only Money, the wholesome film it is. However, it was not released immediately because Howard Hughes was taking over RKO Radio Pictures. He chose not to release the film until 1951, at which point it was given the suggestive title and advertised with the racy illustrations and taglines. Unfortunately, the PCA did not review this material. The PCA Seal number indicates that the Seal of Approval was issued in 1948. After that, the PCA had nothing more to do with the film. As always, the Advertising Code Administration (ACA) previewed the advertising material. Since the ACA was not as strict and thorough as the PCA, filmmakers got away with a lot more in advertising than they could in the actual movies. However, that does not compromise the actual content of the film, which is wholesome and acceptable.

I found this to be a very amusing picture. It was very funny and very enjoyable. I liked the cast led by the unusual trio. I thought Frank Sinatra was quite effective in his role as the nervous bank teller who wants to do the right thing. This is the first film in which I have seen Groucho Marx. I found him to be hilarious! His combination of droll humor and quick comebacks is so effective. I thought he played off Mr. Sinatra very well. I haven’t seen Jane Russell in many movies, so it was interesting to see her in this sedate role. I was so pleased to see her properly covered! Her figure looked lovely in the decent clothes she wore in this movie. I thought the two songs were very memorable. The duet between Mr. Sinatra and Miss Russell was cute, well-accompanied by their rhythmic knocking on the wall. The film’s hit for me was the comical duo which the two main men sing about money. Its tune and lyrics were so memorable that I was singing it for the rest of the evening. Many have criticized this movie for its weak plot, but I found the storyline to be captivating, even if slightly irrational at times. I didn’t find it to be insulting to my intelligence at any time. It was played quite fancifully, so I didn’t take it too seriously. If watched in the light-hearted spirit with which it was instilled, this movie can be very enjoyable and comical. 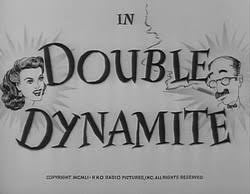 I recommend this film to my readers. It is a light, amusing musical comedy. It has two good songs and lots of hilarious comedy, particularly from Groucho Marx. One of my favorite comical moments was when he walked into the bank while pretending to be a millionaire, demanding to discover the bank’s stability before investing his funds. I think that fans of Frank Sinatra may enjoy seeing him in an early role like this. Those who are accustomed to seeing Jane Russell only in risqué roles such as Rio in The Outlaw will be surprised, I hope pleasantly, by how demure and proper she is in this film as a young lady who just wants to get married. It may not be a sensational film, but I think it is very entertaining. I liked it, and I think other classic film fans will, too!

This week, I only watched one new Code film.