Mary Breen is the smiling woman in the center. A priest friend is between her and Joe.

This is the 100th article I have posted on PEPS!

Today is December 21st. It is four days until Christmas. It is Mary Rose Breen’s birthday. As such, it is a good day for discussing the life of the woman who had the biggest influence over the man who had the biggest influence over Hollywood during the Golden Era. Behind every good man, there is a good woman, and Mary Rose Breen was the good woman behind Joseph Ignatius Breen, the head of the PCA.

On December 21, 1894, Mary Rose Dervin was born in Philadelphia, Pennsylvania. She was the daughter of Irish immigrants. Her father owned a saloon, but she always referred to him as a “restauranteur.” Her father, Michael Dervin, was 34 at the time of her birth, and her mother, Helen, was 22. She was the second of seven children. Joseph I. Breen, another Philadelphian of Irish descent, was her childhood sweetheart, even though he was six years older than she was. In February of 1914, at the age of 20, Mary married him. On Christmas Eve of that same year, their first child, Helene, was born.

Mary and Joseph had a very happy marriage. They were married for fifty-one years until his death. They had six children, including Helene (December 24, 1914), Natalie (January 4, 1917), Joseph Jr. (January 31, 1918), Frances (October 4, 1919), James (December 23, 1920), and Thomas (January 3, 1924). I don’t know about Frances, but I know that all of the other children got married, and four of them definitely had large families. I don’t know if Thomas had children, but he was married. They all seem to have stayed devoted to the Catholic Church and the Christian morality which their parents taught them. It seems that Joseph and Mary did a good job with their children.

During their first ten years of marriage, they had their children. Ten years later, Mr. Breen became the head of the PCA. The first seventeen years were not easy ones for them financially. During the early years of their children’s lives, they were traveling from place to place as Joseph went from one job to another. Their first child was born in Philadelphia, but their second was born in Jamaica, where Mr. Breen was part of the foreign service. The next three were born in New York, and the youngest was born in Washington, D. C. In 1931, when Mr. Breen went to Hollywood as Mr. Hays’s assistant, he was able to make a new life for his family. They had a beautiful beach house in Malibu; later they had another house in Holmby Hills on the most expensive street in Beverly Hills. At sixteen, Helene was almost grown, but Thomas was only seven. While most of America enjoyed good times in the 1920s but faced hardship in the early 30s, the Breens were doing better than ever before by 1931. With a large salary, a provided car and chauffeur, plus two domestics, life was quite comfortable for them. In addition, the warm Californian climate gave them a chance to thaw out after the blustery winters of Philadelphia, New York, and Chicago. Mr. Breen described it as “most agreeable;” I’m sure Mary agreed.

This photograph, the earliest picture I have been able to find of Mrs. Breen, is of her and her husband in Ireland in 1935. That summer, Mr. Hays was generous enough to give Mr. and Mrs. Breen a two month vacation to Europe with all expenses paid. Mr. Breen was “flabbergasted” at his generosity. Mr. Hays probably figured that it was the least he could do, since Joe was doing all the work, while he was getting all the credit. Also, it gave Mr. Breen a chance to rest after nearly a whole year of hard work as the head of the PCA. I’m sure that Mary appreciated the opportunity to spend some time with her husband. As usual, Mary is smiling at the camera, and Joe is pointedly ignoring it. He didn’t like cameras very much, and he always avoided having his picture taken if at all possible. Mary, on the other hand, always flashed the camera a big smile. In this picture, Mr. Breen looks quite stoic, as he usually did when he knew cameras were flashing, but the position of his arm implies that he was about to or just had placed it around Mary’s shoulder. As a decorous Victorian gentleman, of course, he wouldn’t let the unseen photographer capture a picture of a public display of affection. I’m sorry about the poor quality, but I had to copy it from a book. In addition, here is a rough copy of a newspaper article declaring Mr. and Mrs. Breen’s departure for a vacation in 1938. 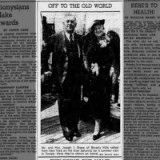 Mary was known to be a frequent giggler. She had a lively personality and a lot of vitality. Although she was an old-fashioned wife, who always minded her husband’s wishes, she wouldn’t stand for any nonsense from Joe or anyone else. Like many men of his generation, Mr. Breen kept many of his business problems from her, since he didn’t want to worry her. However, he also confided in her frequently. They enjoyed entertaining in their lavish Holmby Hills house, where I understand they gave some very nice parties, which were attended by other Irish and Catholic Hollywood people.

Like all couples, they had hardships and troubles, but they had many blessings, too. Despite Mr. Breen’s frequent changing of jobs, they always managed to make ends meet. Because he was the sole supporter of his wife and family, he didn’t have to serve in World War I. The first real problem they faced was his illness in 1925. Overwork brought on intestinal ailments which was very difficult to diagnose, and he was unable to work for several months. However, he got a better job afterword. He suffered from such ailments on and off for the rest of his life, but he never let them keep him from doing his job at the time and supporting his family. He had the assurance that, no matter what happened, Mary would be there with him. During World War II, all three of their sons were in combat. Joe Jr. was wounded in Europe, James was stricken with malaria, and Tommy, sadly, lost a leg in Guam. The Breens considered themselves blessed, however, to not have lost any of their three boys.

In 1954, after twenty years of faithful service to his country and religion through unfailing enforcement of the Code, Mr. Breen retired. He and Mary threw one last party before moving to Phoenix, Arizona, to enjoy the only long-term rest he ever really had. He had been diagnosed with lung cancer in 1951, but he managed to live for many more years. He and Mary enjoyed eleven years together in Arizona, despite his ill health. It was a chance to rest after his toil. In 1965, at the age of 77, he died. Mary was almost 71 when he died. That December must have been very difficult for her, since she had to endure her own birthday, James’s birthday two days later, Helene’s birthday the next day, and Christmas the day after. I’m sure that each was a reminder of her recently departed husband. After fifty-one years of marriage, it must have been very hard for Mary to be husbandless. However, she had had as many years of happy marriage as anyone of her generation could expect. I don’t know what she did in the fourteen years after Mr. Breen died, but I assume that she lived with one of her children. In August of 1979, at age 84, Mary died and was laid next to her husband.

If Mr. Breen was the president of the Code and the PCA, Mary was the first-lady. I’m sure that Joe consulted her when he felt he needed a woman’s touch. A good wife always influences her husband. I don’t know if she ever visited the Hollywood and Western Building, but I know that her presence was there through her support of her husband. Mary Rose Breen was a wonderful woman; without her, Mr. Breen wouldn’t have been the man he was.

Today, Mary would have been 123 years old. If she were still living, she would beat the world record for the oldest woman today. However, I am glad that she has joined her husband in eternal rest. Mr. and Mrs. Breen represented the perfect Irish Catholic couple. Even their names, Joseph and Mary, fit together perfectly in Christian context. They made their mistakes, but they always tried to do the right thing, and they were rewarded during their lives for this. Happy Birthday, Mary! May your memory shine through every good screen mother from your husband’s era. May we remember you through Mrs. Hardy, Mrs. Kildare, Mrs. Cohan from Yankee Doodle Dandy, Mrs. Thayer from Rich Man, Poor Girl, Mrs. Logan from Let Freedom Ring, Mrs. Sargent from Remember the Night, and all the other screen mothers. May such mothers never perish from the earth, and may they someday shine on the Silver Screen once more!