The Emperor Waltz is a 1948 musical set in Austria’s early twentieth century. It tells the story of the dual romance between an Austrian countess and her pedigree poodle and an American traveling salesman and his lovable mutt. It is set against the background of beautiful Austrian locations, which are enhanced by Strauss melodies and some American crooning. This is one of the least popular films directed by the famous Billy Wilder, but it shows a different side of his talents. I will examine this film in term of its story, its cast, its music, and its direction to show that going to the dogs might not have been a bad thing for Billy Wilder.

The story starts with the intrusion of an under-dressed American, Virgil Smith, into a magnificent ball given by Emperor Franz-Josef of Austria. As he begins dancing with the unwilling Countess Johanna von Stolzenberg Stolzenberg, party guests begin recounting the story of their scandalous romance during the summer. They first met at the Emperor’s palace, where Virgil was suspected of plotting against the Emperor’s life when he just wanted to sell him a phonograph; Johanna and her father were there because the Emperor wanted to arrange a “marriage” between the countess’s poodle, Scheherazade, and his own, Louie.

Outside the palace, Scheherazade got into a nasty fight with Virgil’s ordinary dog, Buttons, so Virgil confronted the proud noblewoman about class distinction among dogs and people. They met again in the mountains, where the gentry were preparing for the canine nuptials, and the American was trying to corner the emperor to sell him his product; the dogs got into another fight, which left Scheherazade frenzied at the sight of any other dog. Johanna had to take her poodle to Mr. Smith’s inn so that she could face her anxiety about him. With Virgil’s singing in the background, Buttons was so sweet and affectionate to Scheherazade that they went from being enemies to sweethearts. Of course, Virgil and Johanna had to give them an example with a little kissing. This event turned the two pairs of foes into two happy couples. After a few days, Scheherazade couldn’t stand the separation from her beau, so she ran away from the royal kennel and joined Buttons on a tiny islet where Virgil put him. Of course, Johanna and Virgil were right behind her; on the island, the happy couples enjoyed a pleasant afternoon. During the next few weeks, the four of them continued to meet and spoon on the island. Eventually, Virgil decided to go to the Emperor and ask for permission to marry Johanna. During their conversation, however, his majesty convinced the young salesman that marrying him and moving to America would make Johanna miserable; the reluctant Mr. Smith agreed to his proposition of selling the phonograph but giving up Johanna for her sake. Virgil convinced Johanna that all he ever wanted was a chance to see the Emperor, and she was devastated. Now we have returned to the present. Virgil leads Johanna out of the ballroom and implores her to let him bring Buttons in to see Scheherazade for just a moment, since he is dying of a broken heart. How will the story resolve? Will Virgil tell and convince Johanna that he really does love her and that he gave her up for her own good? Will she realize that she wants to live his simple life anyway? Will the dogs be able to live happily ever after together, or will Virgil and Buttons have to go back to America alone, leaving the two ladies to be miserable with European gentry they don’t love? Well, you’ll have to watch the movie yourself to find out!

This cast is filled with actors who are playing Austrians, but Bing Crosby’s character is the only representative of the United States; the excellent actors give clear distinction between the nationalities.

Mr. Crosby brings his usual charm to the role of Virgil Smith. He sings, whistles, waltzes, and even yodels in this movie. He is persistent in his business, but he knows that marrying the girl you love is more important than selling phonographs. 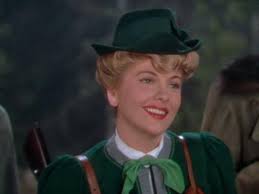 Joan Fontaine is lovely in the role of the young, widowed countess. She looks extremely refined and very historically accurate in the period costumes. The Technicolor reveals her hair to be a charming shade of gold which is tending toward titian. She brings the proper amount of noble coldness to the role, yet she is very sweet and tender in the romantic scenes.

Her father, the sniveling, dishonest, greedy Baron Holenia, is played with excellent contemptibility by Roland Culver. He is very convincing as the heartless, selfish nobleman who will do anything, including marrying an elderly princess, to finance his lavish lifestyle.

Richard Haydn is extremely accurate as Emperor Franz-Josef; he is refined and royal, and he looks extremely like the real emperor.

An interesting historical fact is that, in one scene, you can see a genuine portrait of the real emperor’s deceased wife, Elisabeth, on an easel in his apartments.

Buttons and Scheherazade are played by excellently trained dogs, who execute their parts with amazing precision and superb acting. The rest of the cast is marvelous, as well.

In Viennese stories as in Hollywood musicals, the music is very important; since The Emperor Waltz is both, we must not forget to discuss the marvelous score. The main waltz which is used throughout the movie is “The Emperor Waltz,” or “Kaiser-Waltzer,” by Johann Strauss II. It is played during waltzing at the ball, and Bing sings it at the end.

When Virgil arrives in the mountains, he is walking along, dressed in Alpine clothes, and singing “Friendly Mountains,” which is a modern song with yodeling incorporated. Later, Johanna and Virgil are trying to make the dogs be friends in his room at the inn. Virgil sets the proper mood by singing “I Kiss Your Hand, Madam;” he rolls in a piano and begins to accompany himself. His vocalizing encourages Buttons to begin licking Scheherazade’s paw. The piano accompaniment is enhanced by two policemen fiddling outside the door.

Downstairs in the inn’s lobby, the chauffeur, the upstairs maid, and the female innkeeper begin to do a balletic trio dance to the music. It is charming.

One of the best moments in the film is the first time the foursome is on the island. It is getting late in the afternoon, and all the people in the village on the shore have finished their work for the day . During the day, they make fiddles, and afterwords, they play them. The song starts with just one person playing the violin, then a few others join.

Soon every person in the town is playing his string instrument to create a beautiful melody. The gorgeous strains drift across the pristine water and reach the islet, where Johanna is trying hard to resist the charm of the situation. Virgil adds his beautiful voice to the string accompaniment and sings, “The Kiss in Your Eyes.” By the end of the song, Johanna knows that she is in love with him.

I have heard that Billy Wilder said that The Emperor Waltz was his least favorite of all the films he made; perhaps that’s because it was different from his famous movies. People remember Wilder films that challenged sensibilities, that fought boundaries, and that broke rules. During the Code years, he wanted to make films that Joseph Breen called “tough nuts to crack.” It took a lot of work on the part of the Production Code Administration to make films like Double Indemnity, The Lost Weekend, and Sunset Boulevard Code-compliant films, but they eventually achieved the Code standard. In the Shurlock era, Billy Wilder was one of the foremost directors in the cause to destroy the Code and the PCA. The Emperor Waltz was not trying to be risque or dirty, and it wasn’t trying to get around any parts of the Code or Mr. Breen. It was simple, good entertainment. I don’t think there was anything wrong with some of his other Breen films, such as the three I mentioned. They were more daring, but that doesn’t mean that they weren’t Seal-worthy. This one, however, was one that had more mass appeal. It is very sentimental, probably because Vienna was Mr. Wilder’s home town. He wanted to depict it in the beautiful days before the two World Wars. In 1948, World War II was a very recent memory. This was a good film to release to tenderly remember the beautiful, peaceful, glorious days Austria experienced before the two horrible wars. I think that this film really shows how far Billy Wilder fell. He could make subtle, gentle, pure entertainment that complied with the Code. He could also make more controversial pieces like The Lost Weekend. However, in the Code years, he was forced to direct his talent toward making entertainment of real quality instead of entertainment that broke rules. I never want anyone to infer that I don’t think Billy Wilder was a talented, exceptional director. I think he was a marvelous one who went pitifully astray in the Shurlock era and afterwords. Some filmmakers like Mr. Wilder did their best work under the self-regulation of Joe Breen’s PCA, since they needed guidance and guidelines to be really brilliant. Some Like It Hot is a lot more famous than The Emperor Waltz, but it doesn’t have any sweet, sentimental, beautiful moments like this movie’s scene of the whole village making beautiful music together.

Having considered the story, cast, music, and direction of The Emperor Waltz, I conclude that it is an enjoyable, appealing movie, despite its poor reputation. The story is an unusual but endearing one with a delightful, humorous emphasis on a canine couple; modern dog lovers should enjoy seeing all the charming scenes with the dogs’ romance. The cast, with Joan Fontaine as the leading lady and Bing Crosby as her American suitor, is one which makes the excellent story even better. The music, which is a unique combination of famous Strauss waltzes and great American songs, adds even more color to the story. Besides seeing all these wonderful artistic attributes, watch this movie to notice how sensitive and brilliantly subtle Billy Wilder could be when he was trying to achieve more than shock value. Maybe Billy Wilder did his best work when he let his movie go to the dogs!

This article is part of the Joan Fontaine Centenary Blogathon, which is being hosted to celebrate Miss Fontaine’s 100th birthday, which is October 22. The hostesses are Crystal Kalyana of In the Good Old Days of Classic Hollywood and Virginie Pronovost of The Wonderful World of Cinema. Be sure to read all the articles which are being written to celebrate and honor a wonderful actress from Hollywood’s golden era.

6 thoughts on ““The Emperor Waltz:” Austria is Going to the Dogs Indeed!”