For the second Breening Thursday article, I am going to breen an early Shurlock era film, High Society from 1956. This film is part of the large, interesting genre of 1950s musical remakes of 1930s and early 40s screwball comedies. This particular film is a remake of The Philadelphia Story from 1940 with Katharine Hepburn, Cary Grant, and James Stewart. This remake is singular, however, in the fact that, for the most part, it is cleaner than the original Breen film! Mr. Breen struggled greatly to turn the unCodish play into a Codish film, but he was not entirely successful for whatever reason. Interestingly, many of the elements which Mr. Breen tried to remove from the original were removed from the remake. I will go from the beginning to the end of High Society and breen every objectionable point I find.

When Caroline enters the room where her mother is sorting the wedding gifts, she says, “I’m pooped.” Her mother corrects her by saying, “No, dear, you’re elevated.” Caroline’s line doesn’t seem quite proper. It should be changed to “I’m beat.”

When Tracy is told that a writer and a photographer from Spy Magazine are going to cover her wedding, she says, “I am to be examined, undressed, and thoroughly humiliated at 15 cents a copy?” The italicized word should be changed to exposed. 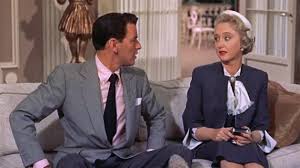 When Mike and Liz from Spy Magazine are first in the house, Liz tells Mike not to make snap judgements about Tracy before he knows her. She says, “You were wrong about me. Remember?” “Yeah,” he replies. Frank Sinatra says this line very suggestively. I am not sure exactly what part of the Code it violates, but I know it does not seem proper. The exchange should end before Liz says, “Remember?”

Later in the scene, Mike is surveying the south parlor. Noticing the surplus of telephones, he says, “Lousy with phones.” The word lousy was forbidden under the Code, so the expression lousy with is also unacceptable. Mike could say something like, “The joint is crawling with phones” instead. 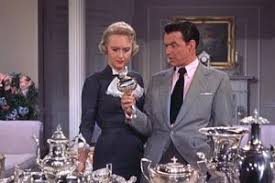 At the beginning of the scene where Mike and Liz sing “Who Wants to Be a Millionaire?” Liz asks Mike, “Were you by any chance playing footsies with me during lunch?” Mike replies, “From where I sat?” Liz sarcastically says, “I didn’t think your reach was that good. Seth Lord has a roving eye… and foot.” Now, it must be acknowledged that at this point, the magazine employees still think Uncle Willie is Seth Lord, a married man. That aside, the reference to playing footsies is too suggestive.

At Tracy’s “bachelor party” the night before the wedding, Tracy asks Mike, “Are you having a wonderful time?” He tipsily replies, “It’s a gasser.” That idiom doesn’t seem respectable. He should instead say, “It’s a blast.”

At the same party, Dexter, Tracy’s former husband, dances with a very drunken Tracy. He leads her out onto the terrace. He asks to kiss the bride, and he kisses her tenderly on the lips. She becomes rather carried away and says, “Oh, Dexter,” before kissing him back rather aggressively. I have no objection to the kiss in general. I simply do not like the way she loudly inhales through her nose before kissing him. This makes it seem “excessive or lustful,” which the Code forbids. Remove the inhale, and the scene is acceptable.

When George sees that Tracy is very intoxicated and making a perfect spectacle of herself, he takes her to an empty parlor and tells her to lie down on the couch for a while. As he turns to exit the room, Tracy says, “Lie down with me, George.” “Tracy!” he responds in horror. I needn’t explain why Tracy’s line needs to be removed. 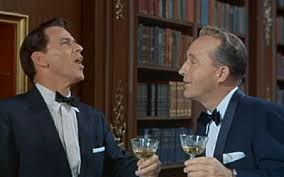 In the song “What a swell party this is” there are a few points of objection in the lyrics. Of course, this was a Cole Porter score, so one must expect a few such problems. Some objectionable elements were removed, but two remain. Dexter sings, “What frails, what frocks,” two very old terms for women. In response, a drunken and rather unrefined Mike says, “What broads!” This is a forbidden name for women, since it directly refers to the width of their hips. It might be replaced with dames or dolls, which both are demeaning in their way but are not vulgar. Also, Mike sings the lyric, “Have you heard that Mimsy Starr, she got pinched in the Astor Bar.” If you don’t see the objectionable element in this line, you are not alone; Geoffrey Shurlock did not notice it either. I only know about it because it was explained in a book. Just take my word that it should be eliminated. 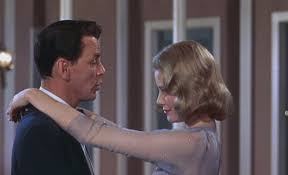 is the romantic sequence between Tracy and Mike on the night before the wedding. Perhaps it is because of the way the script was changed, but I am inclined to think that it is because of the actors involved. James Stewart in 1940 will always seem more respectable than Frank Sinatra in 1956. The whole sequence by the swimming pool should be changed. Tracy’s line, “Tonight I want to do everything,” seems a little suggestive. Also, the kissing is too excessive and lustful. The passion seems too wild. There is too much kissing in rapid succession and pressing of cheeks. The kissing should be shorter and less.

When Mike is carrying Tracy back from the pool after their late night swim, she should not say, “Take me upstairs, Mike.” That does not seem proper.

On the morning of the wedding, Mike and Liz are chatting. He says, “You’re quite a girl, Liz.” She tells him that he is the second man in the last twenty-four hours to say that to her. “I must be getting bookie, hippy, or toothy.” She should not make such a direct reference to that part of her figure.

Later that morning, Uncle Willie has arrived for the wedding. He says, “What’s going on here? I expected to find the police and at least two hacked up bodies.” That is rather gruesome; it could be offensive to some people’s sensibilities. The italicized words should be removed or replaced, or the whole phrase should be eliminated. 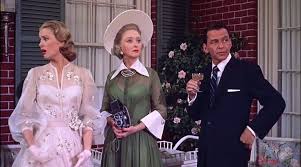 Care should be used in the whole situation in this scene about the supposed affair and Tracy’s virtue. This scene is certainly no worse than the same one in the Philadelphia Story; in fact, it might even be better! I think it would be fair to say that this scene in both films skirts the edges of the Code. The worst line in the scene is Tracy’s question, “Why? Was I so unattractive, so distant, so forbidding and cold or something?” Mike has just removed her horrible suspicions that they did something immoral the night before, but she is now asking why he showed such decency. She seems rather indignant that he was able to control himself so much; in fact, she seems a little insulted. I think this line should be changed to something which reflects her feeling of unworthiness. Perhaps she should say something like, “Why were you so good to me? It’s more than I deserved.” Then, his line about her being the worse – or the better – for wine would still make sense. This would also set up her line to Liz, “Aren’t men wonderful?”

It may seem like I am really nitpicking this film, but that is because it is such an excellent picture. In fact, it really was very close to being totally Code-compliant. Not every film made under Mr. Breen’s watch was 100% Codish. I am detailing the ideal, which is that all films contain absolutely no breaches from the Code in either letter or spirit. Not all Breen films reached this ideal, but they came closer than films made any other time. The Philadelphia Story is a clear example of a Breen-sealed film which was not up to the PCA’s usual standard under Joseph Breen. Mr. Breen certainly was not perfect, but he usually did his job very well. I too may miss many things in my breening, but I try to show my readers the process of removing objectionable points from an otherwise clean or at least acceptable film. This is largely to prepare participants for a blogathon I will be holding in November, the Great Breening Fest! I want everyone to know how to breen films for this event.

In conclusion, High Society is a marvelous movie which every lover of old Hollywood should see. The cast is exquisite, the music is excellent, and the dialogue is classic. I hope you will watch this movie soon. My intention is never to dissuade anyone from watching a film I breen. On the contrary, I hope all my readers will watch my breened films at their earliest convenience. As you do watch this or any other film from a period which was not self-regulated by Joseph Breen, I hope that you will act as its self-regulator and notice the slight or major breaches in Code compliance. Afterwords, ask yourself if the picture would have been a worse one with Breenish changes. High Society certainly would not have been. If possible, I think it could have been even better, since no one could possibly object to or be embarrassed by any part of it. That is, it would be “reasonably acceptable to reasonable people.” “End of story.” 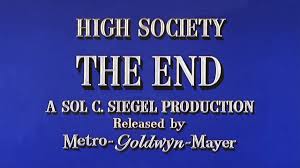 C. K. Dexter Haven: A wealthy popular composer who was married to beautiful Tracy, whom he calls Samantha, and is trying to win her back; played by Bing Crosby.

Tracy “Samantha” Lord: A sophisticated socialite who divorced her first composer husband, Dexter, and is engaged to an self-made coal miner, George; played by Grace Kelly.

Mike Connors: A roguish reporter for Spy Magazine casually courting his photographess who covers Tracy’s wedding and falls for the bride; played by Frank Sinatra.

Liz Imbrie: The sweet photographess from Spy Magazine who loves Mike but doesn’t want to get in his way for a while; played by Celeste Holm.

George Kittredge: The stuffy, self-built coal miner who is engaged to Tracy; played by John Lund.

Uncle Willie Lord: Tracy’s paternal uncle, a wealthy, dirty old man who chases Liz and any other girl he can find; played by Louie Calhern.

Seth Lord: Tracy’s father, whose infidelity to her mother caused her to become embittered; played by Sidney Blackmer.

Caroline Lord: Tracy’s scheming young sister who wants to reunite Tracy and Dexter, with whom she is a little infatuated herself; played by Lydia Reed.

Louis Armstrong: The main feature of the Newport Jazz Festival who plays himself with classic style and provides this picture with some of its greatest music.