Today is Sunday, so it’s time for another 100 New Code Films article. In all but four weeks this year, I will watch and review two American Breen Era (1934-1954) movies which I have never seen before. In the other four weeks, I will only watch and review one to equal the planned 100 new Code films. The purpose of this series is to broaden my knowledge and understanding of the Breen Era by seeing more of its movies, as well as to bring me closer to my goal of watching every Hollywood film made during the Breen Era. Although I am avoiding Code films during August, since this is #AMonthWithoutTheCode2020, I am continuing my 100 New Code Films reviews to stay on this series’s schedule. I watched all the films I am reviewing this month in July. 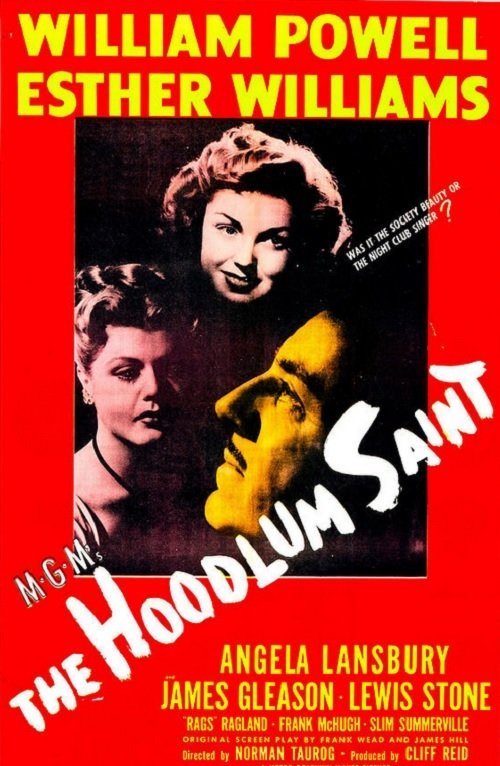 Today’s topic is The Hoodlum Saint from 1949. When I perused Esther Williams’s film list at IMDb, looking for a topic for the Esther Williams Blogathon, I found that I had watched all but two of her Breen Era films. Excited about the chance to complete her Code filmography, I signed up to watch one of those films for this blogathon, saving the other for the Van Johnson Blogathon later this month. On July 31, I watched this film for free on ok.ru. It was the last film I watched during July and will be the last Code film I watch until September. 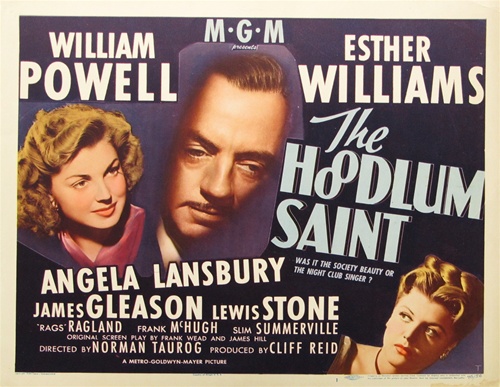 After World War I, a former newspaperman, who used to specialize in writing features about criminals and mugs, is unable to get his old job back. After spending his last $300 to bail out some criminal friends of his, he decides to crash a high society wedding reception to get a job. There he meets a beautiful young woman, who introduces him to her uncle, a newspaper owner. He gets a job with his rag by agreeing with his dislike for a business tycoon, but a few months later, he quits to work for that tycoon himself! He eventually becomes a big New York businessman, with a beautiful saloon singer sweetheart. However, he can’t forget about the girl he left back in Baltimore. When he tells the convinces his mug friends that St. Dismas, the thief on the cross who is the patron saint of hoodlums, is responsible for getting one of them out of jail, they start a charity for the saint, which changes the lives of all those involved, including the selfish businessman.

This movie was directed by Norman Taurog. It was produced by Cliff Reid. The production company was MGM. The screenplay was written by James Hill, Frances Marion, and Frank Wead. It was based on the true story of Chicago businessman Dempster McMurphy, who founded a charity in the name of St. Dismas. 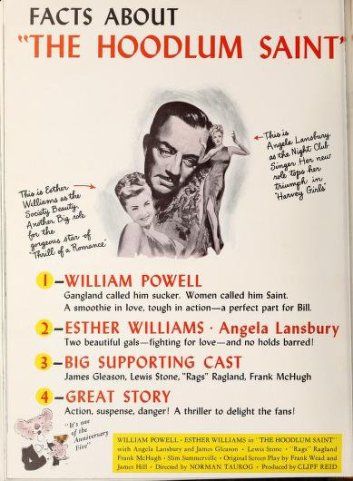 This is a perfect Code film. Firstly, it is completely free from objection. In terms of costumes, dialogue, and romantic situations, everything is decent and Code compliant. It deserves the ranking of perfect Code film because of its religious elements. A bunch of selfish, crooked thugs are elevated to lives of generosity, charity, and public service because they develop faith in St. Dismas. Although the initial miracle is rigged by human means, later events happen which seem to have been caused by the saint. Many characters, including Terry (William Powell), lack faith in the saint and regard such religious devotion as superstition. Other characters, such as Three Finger (Frank McHugh) and Dusty (Angela Lansbury), use the saint’s reputation and charity for personal profit. However, Snarp, a criminal who reforms after he thinks Dismas gets him out of jail, is completely devoted to the saint and his service. His faith leads him to found the charity and eventually melts others’ hard hearts. Whether or not you believe in saints, this kind of faith is inspiring to anyone, since we all must have faith in something.

I highly recommend this movie. It is an unusual film in many ways, but I really enjoyed. The story is quite complex, and it covers a lot of territory in terms of years. It begins just after World War I and goes to the Wall Street Crash of 1929. The acting is very good in this film. William Powell gives a great performance, as always. He makes us like Terry while also feeling frustration toward him. Esther Williams is lovely as Kay. Angels adds depth to the story as Dusty, the café singer who is in love with Terry. The two women’s jealous interaction is very believable and interesting. James Gleason’s portrayal of Snarp gives the plot momentum, contributing the element of faith. He does a great job of being a selfish mug who completely changes his life because one prayer is answered. Other supporting actors, including Lewis Stone, Frank McHugh, “Rags” Ragland, and others round off the cast to make the perfect ensemble. This is a really enjoyable movie. I think other classic film fans would enjoy it, as I did.

This is my second entry in The Esther Williams Blogathon hosted by Michaela of Love Letters to Old Hollywood. In honor of Esther Williams’s 99th birthday, Michaela is asking other writers to join her in this celebration of MGM’s swimming siren. In The Hoodlum Saint, Esther doesn’t display her aquatic aptitude. In fact, she never even gets wet. Other than A Guy Named Joe (1943), in which she just appears in one scene, this is the only Code film she made in which she stays completely dry. Of course, not every other Breen Era movie she made was an aquacade, since her swimming was quite limited in Take Me Out to the Ballgame (1949) and Fiesta (1947). However, this movie really shows Esther’s acting talents. Her swimming talents were amazing and completely unrivaled in Hollywood, but she was still a great performer and wonderful leading lady when she dried off. In the role of Kay, she is very tender, sweet, clever, and spunky. She wears some lovely period clothes. There are a few sections of the story during which she doesn’t appear for a while, but her presence is always charming when she returns. She acts opposite serious leading man William Powell very well. When you see her in this role, you can appreciate that she wasn’t in Hollywood just because she looked good in a bathing suit. She was a wonderful actress, beautiful woman, and magnificent performer all around. If you enjoy Esther’s talents, be sure to add this movie to your watchlist!