Today is Friday, so it’s time for the second 100 New Code Films article of the week. This is the twentieth new Code film which I have reviewed during July. Each week, I usually watch and review two American Breen Era (1934-1954) movies which I have never seen before. However, during #CleanMovieMonth2020, I have written twelve additional mini reviews of new Code films as part of this celebration. This is the final article which I will publish during July. 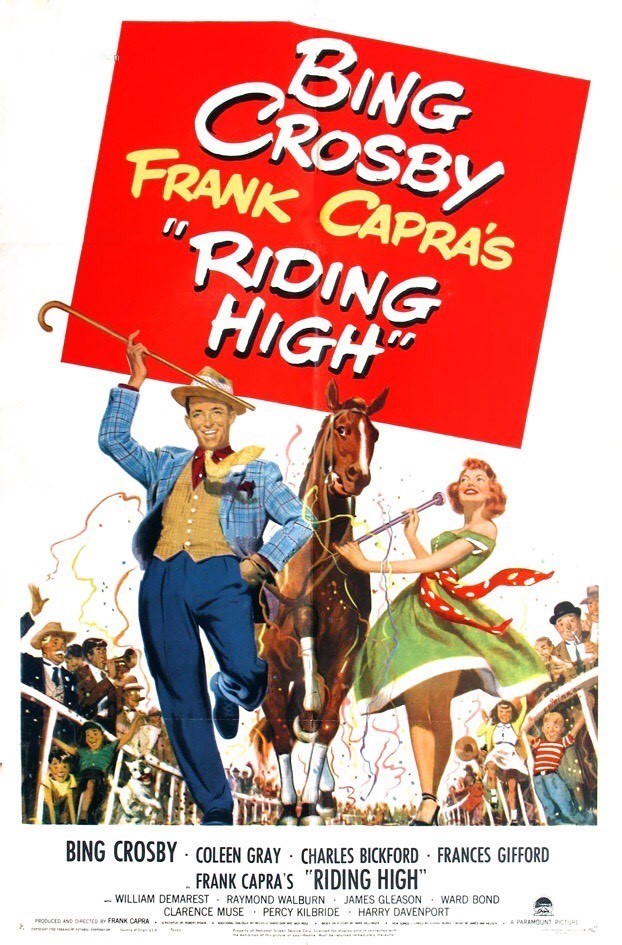 Today’s topic is Riding High from 1950. My mother added this film to our watchlist recently and suggested it as a new film to watch a week ago Saturday. I was pleasantly surprised to learn about a Code Frank Capra film of which I have never heard. Bing Crosby as the leading man and the horse racing premise made this film sound like a winner! It was a good choice for a lighthearted movie night option. A lighthearted horse breeder is engaged to the daughter of a powerful manufacturer. Like his future brothers-in-law, he has been put in charge of a manufacturing company. However, he is more interested in training his three-year-old thoroughbred than making cardboard boxes. His fiancee’s younger sister, who is secretly in love with him, is disgusted by the way the happy-go-lucky young man is giving up his dreams. One evening at a board meeting, the exasperated young man walks out, disappointed that his fiancée won’t come with him. He takes his horse, Broadway Bill, to another city to prepare for a big race. Soon, the younger sister comes and joins the horse breeder and his faithful assistant in training the horse for success. 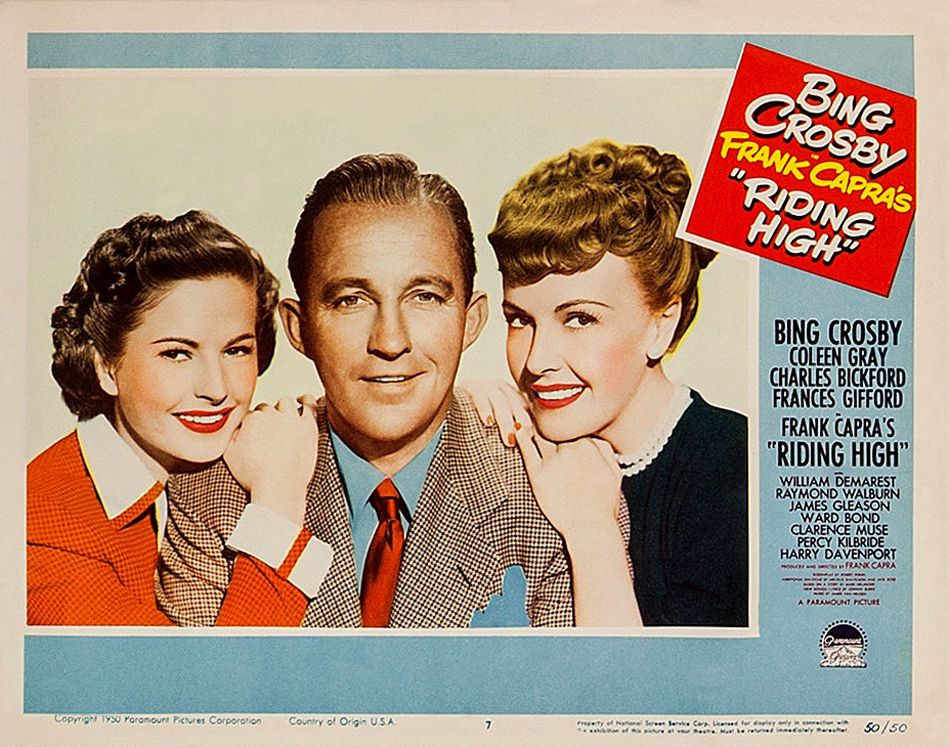 This movie was directed and produced by Frank Capra. The production company was Paramount Pictures. The screenplay was written by Robert Riskin, based on a story by Mark Hellinger. Additional dialogue was provided by Melville Shavelson and Jack Rose. Four original songs with music by Jimmy Van Heusen and lyrics by Johnny Burke were included in the score, “A Sure Thing,” “Someplace on Anywhere Road,” “Sunshine Cake,” and “The Horse Told Me.” Bing Crosby and company also sing old standards “The Whiffenpoof Song” and “Camptown Races.”

This is a good Code film. It has the usual Frank Capra message of following your dreams and pursuing happiness, even if you have to give up a financially rewarding job to do so. I often use the term good Code film to describe American Breen Era films, but what does that really mean? I should know, since I coined the term when I formulated the Code Classification System. This means that the film in question contains no violations of the Motion Picture Production Code. It is completely Code compliant, so it is wholesome, decent, and unlikely to offend anyone. It follows the Production Code Administration’s (PCA) motto of being “reasonably acceptable to reasonable people.” This is just such a film. When combined with a great story, excellent acting, and a wonderful story, what more could you want from a film?

This is a very enjoyable movie. Bing Crosby is very charming and lovable in the role of Dan Brooks, a horse breeder who isn’t afraid to use a little larceny to tide him over while his funds are tight. Mr. Crosby was no boy when this film was made, but he was still convincing in this energetic, happy-go-lucky role. His female companion for most of the film is Alice Higgins, the younger sister of his fiancée. She is played by Coleen Gray, an actress whom I did not recognize by name or by appearance. When I looked over her acting credits, I found that I had only seen her in one other role, a guest appearance on the television sitcom Family Affair in 1968. Anyway, she is great in this role. She is youthful, perky, but determined as the younger sister who is disgusted that her sister doesn’t love her fiancé for who he really is and wants to be. Clarence Muse is great as Whitey, the loyal friend who is always with Dan, helping him and Broadway Bill any way he can. Charles Bickford is perfectly cast as the gruff Mr. Higgins, the stubborn industrialist who, in true Capra fashion, has a heart of gold beneath his hard exterior. Frances Gifford’s heart is a little less golden as Margaret Higgins, the older daughter who is more interested in materialistic things than affairs of the heart. Snippy roles like this are very effectively played by Miss Gifford, who, despite being pretty and sweet in some roles, was very good as harsh, selfish women. This movie is the remake of a 1934 Frank Capra film called Broadway Bill. When this musical remake was released, most critics agreed that its quality was tied with the original, with others saying that it even surpassed its original. Interestingly, footage of horse trainers and races from the original early Breen Era film were reused in this movie, resulting in the inclusion of five actors in this film who died in the 1940s. Not having seen Broadway Bill, I didn’t recognize these clips. They must have been integrated into the film very smoothly, since I didn’t notice the change in film quality. I think that that is largely because this film has the feeling of a 1930s film. The black-and-white cinematography, simplistic story, unpredictable humor, and songs woven into the plot make it seem like a much older film than it is. My favorite song in this is “Sunshine Cake,” a long number which is sung by Bing Crosby, Coleen Gray, and Clarence Muse in the old barn where they are staying with Broadway Bill. I read that all the songs were actually sung onset in this film, which was unusual. I sensed this when watching the film, and it added a lot of realism and naturalness. In addition, the shots of real horse racing make the film even more interesting. I am proud to end my #CleanMovieMonth2020 reviews with this picture. I highly recommend it to my readers.