Today is Wednesday, and it is time for me to write another review in my 100 New Code Films series. While I usually publish my second article of the week in this series on Sunday, each week’s first article can be published on a different day. This is the final week of July, so this is my second to last film review in #CleanMovieMonth2020. 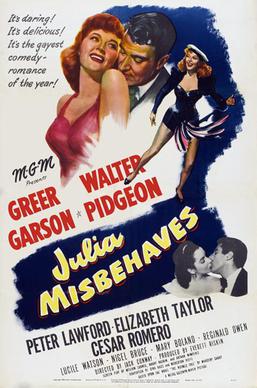 Today’s topic is Julia Misbehaves from 1948. After we watched a film with Greer Garson on Amazon Prime, the streaming service recommended several other Greer Garson films to us, which we added to our watchlist. One of these films was Julia Misbehaves. Described as a screwball comedy, we decided that this film sounded like an enjoyable choice for a lighthearted nighttime movie. We watched this film sometime last week. 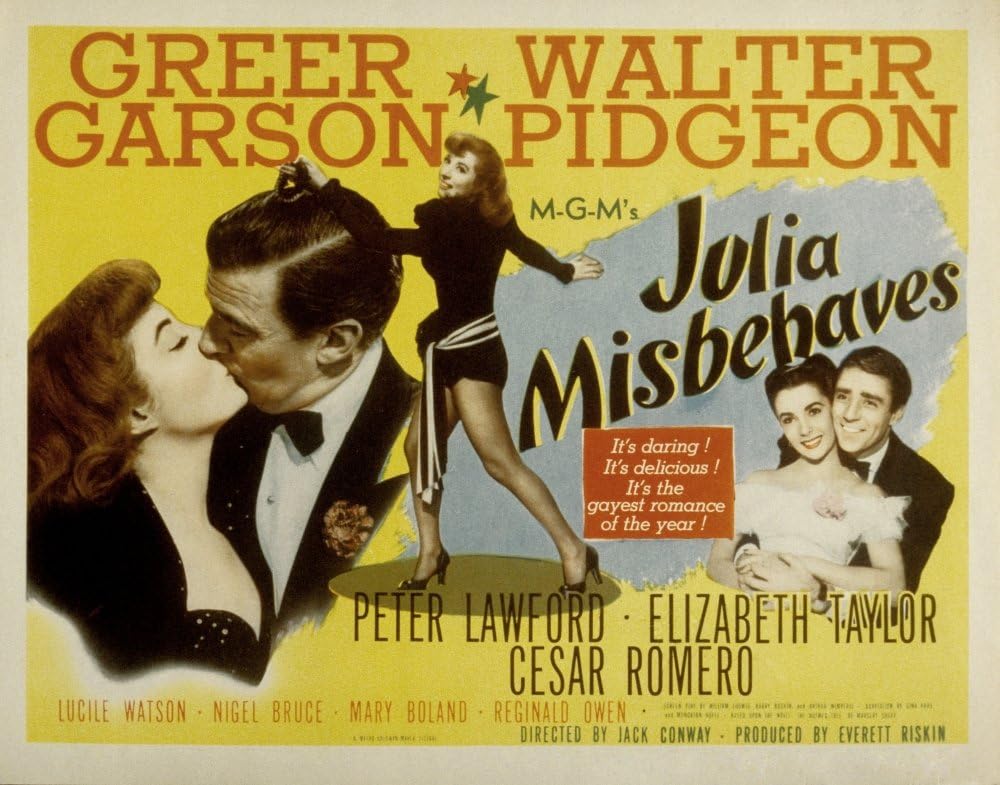 A middle-aged but still beautiful actress receives an invitation to her daughter’s wedding. Her affluent husband separated from her when her daughter was only a year old, insisting that the wealthy, cultured household managed by him and his mother was a better environment for her than anything her mother could provide. Now, the young lady is getting married, so her mother wires that she will travel to their home for the wedding. When her husband and mother-in-law receive her telegram, they are surprised and dismay to learn of her coming, so the husband goes to Paris to stop her before she arrives. During the trip there, she meets and befriends a family of acrobats. When the mother, the act’s leading lady, is unable to perform in the show, the charming actress agrees to take her place. Meanwhile, she catches the eye of the oldest son in the troupe. When she finally meets her daughter, she learns that she sent her the invitation. They become fast friends, while the daughter wishes her parents would reunite. Meanwhile, the young man who does odd jobs around the house is deeply in love with the beautiful bride-to-be. This movie was directed by Jack Conway. It was produced by Everett Riskin. The production company was MGM. The screenplay was written by William Ludwig, Harry Ruskin, and Arthur Wimperis. It was based on a novel by Margery Sharp, and the adaptation was by Gina Kaus and Monckton Hoffe. 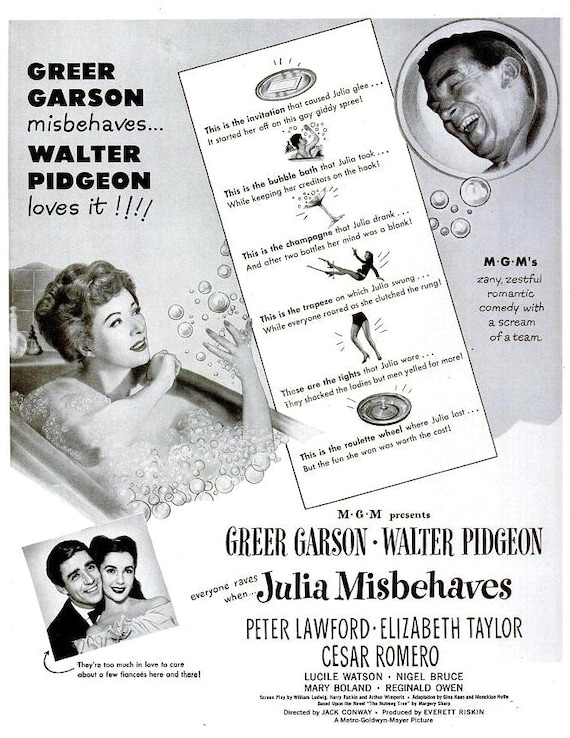 This is a good Code film. Don’t believe any impressions which the advertising material might give to the contrary; this is a very wholesome film! For some reason, this movie was promoted as being about a fun-loving but slightly “naughty” woman. Even the title makes one conclude that this is the story of a badly-behaved woman. That is hardly accurate. True, Julia (Greer Garson) is a carefree, enthusiastic woman who isn’t afraid to flirt, tease, and even connive if it is necessary to achieve her goals. However, there is nothing indecent or improper about this story. It is a humorous film which anyone can enjoy. Above all, it promotes the importance of familial love and marriage.

I really enjoyed this movie. While I wouldn’t call it a screwball comedy, it is hilarious. I don’t think I’ve ever seen Greer Garson be so funny in any other film as she is in this movie. The acrobatic routine she performs is particularly amusing. This film couples her with her famous co-star, Walter Pidgeon. They are a perfect pair, as always. As a husband and wife who have been separated for years, these two actors effectively show us that, although they have some hurt feelings, hard memories, and even bitterness between them, they are still very deeply in love. Elizabeth Taylor is lovely as Julia’s daughter, Susan. When the mother and daughter first meet, they are awkward and strained together. Since Susan was so young when her mother left, they have no memories to share. However, the sad tension dissolves into a loving reunion when Susan reveals that she sent her mother the invitation, wanting to meet her. Peter Lawford adds more complication to the situation as Ritchie Lorgan, the young man who wants to take Susan away from her steady, uninteresting, and unseen fiancé. Cesar Romero provides even more complication as Fred Ghenoccio, the acrobat who wants to marry Julia! There are some very funny as well as very heartwarming scenes in this film. It is another wonderful movie from the American Breen Era.