Today I am going to publish the first 100 New Code Films article of the week. This is the most regular series I have ever featured here at PEPS. While I only published one article per week in last year’s series about new Code films, 52 Code Films, I am watching and reviewing two new American Breen Era (1934-1954) films in all but four weeks in 2020. How can a movie made over sixty-five years ago be new, you ask? By new Code film I mean a Breen Era movie which I have never seen before. Thus, it is new to me. 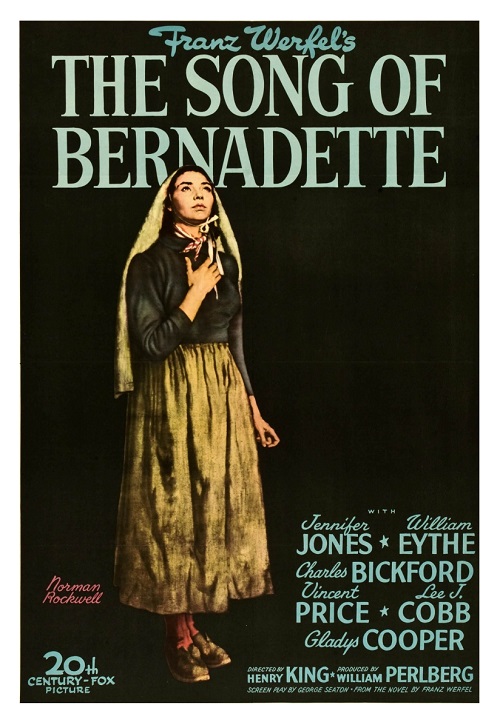 Today’s topic is The Song of Bernadette from 1943. This is one of the movies on my list of films to watch this year. That is because Jennifer Jones won Best Actress at the Academy Awards for her performance as the titular character, as well as Best Actress at the first Golden Globes ceremony. When I heard that my friend Megan Chappie is cohosting Catholic Liturgy Week on her blog, I decided that this was the right opportunity to watch and review this popular Catholic biopic. I watched this film today on ok.ru. 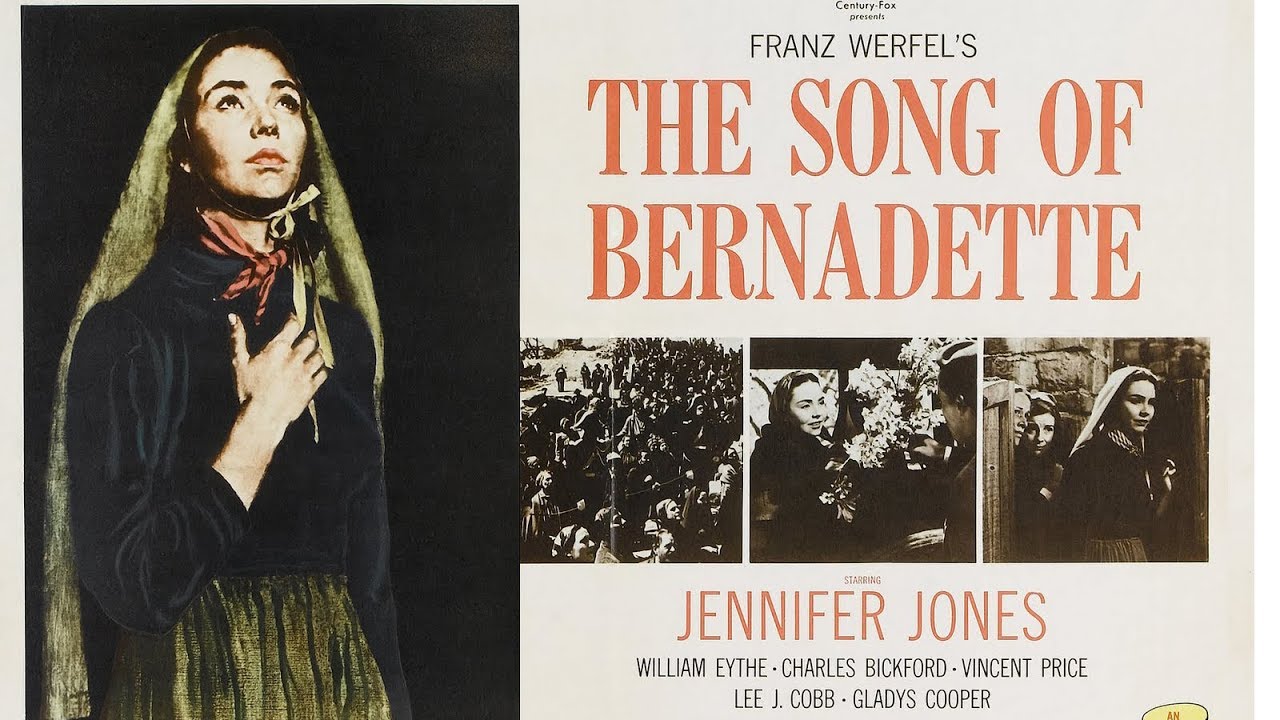 A young French peasant from a very poor peasant village sees a vision of a very beautiful lady in white in a grotto when collecting wood. Although no one believes the simple girl, she is devoted to visiting the lady and doing her bidding. Some begin to say that she is seeing the Virgin Mary, but her parents, the town’s officials, and even the local clergy doubt her truthfulness and sanity. However, when she discovers a miraculously curing spring in the grotto at the lady’s instruction, she and her hometown gain fame throughout the country, and people begin to believe the faithful young girl. 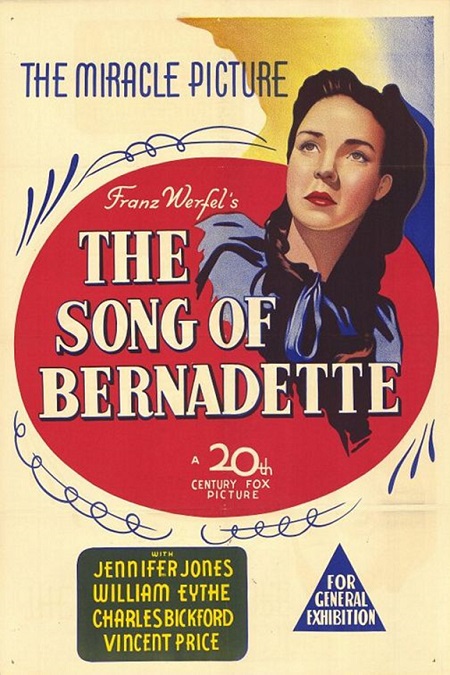 This movie stars Jennifer Jones, William Eythe, and Charles Bickford. Supporting actors include Vincent Price, Lee J. Cobb, Gladys Cooper, Anne Revere, and Roman Bohnen. The credits introduce Jennifer Jones. Although this was not the actress’s first film, it was the first movie she made under her new name.

This movie was directed by Henry King. It was produced by William Perlberg. The production company was 20th Century-Fox. The screenplay was written by George Seaton, based on the 1942 novel of the same name by Franz Werfel. It was nominated for Academy Awards for Best Picture, Best Supporting Actor for Charles Bickford, Best Supporting Actress for Gladys Cooper and also for Anne Revere, Best Director for Henry King, Best Screenplay for George Seaton, Best Sound Recording for Edmund H. Hansen, and Best Film Editing for Barbara McLean. It won Academy Awards for Best Actress for Jennifer Jones, Best Black-and-White Cinematography for Arthur C. Miller, Best Black-and-White Art Direction-Interior Decoration for James Basevi, William S. Darling, and Thomas Little, and Best Scoring of a Dramatic or Comedy Picture for Alfred Newman. It also won Best Picture, Best Director, and Best Actress at the first ever Golden Globes ceremony, which featured no nominees, only winners. The National Board of Review listed it as one of the top ten films of the year. 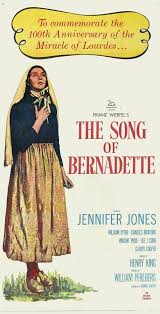 This is a perfect Code film. This movie follows Franz Werfel’s embellished biography of the real Saint Bernadette of Lourdes. Bernadette Soupire’s visions in this film are based on the visionary experiences which the real French saint said she saw. During Joseph Breen’s tenure as head of the PCA, many non-Catholic filmmakers found it advantageous to make unapologetically Catholic pictures. Song of Bernadette is one such picture. However, one doesn’t have to be a Catholic to appreciate the simple faith shown in this film by Bernadette. Any person of a Judeo-Christian faith, and probably any other faith, for that matter, can appreciate the virtues of whole-hearted, unfaltering belief, generosity, and devotion. This picture encourages everyone to look heavenward, whether or not he believes in miracles like visions of the Virgin Mary and unexplainable healing. Especially in a time like 1943, when most of the world was embroiled in the trials of World War II, people need films like this to remind us that, if we have faith, miracles can happen. 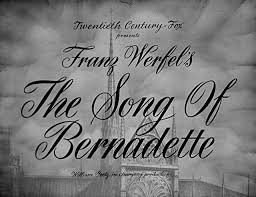 I highly recommend this film. The acting is excellent. Jennifer Jones certainly deserved her Academy Award and Golden Globe. She delivers a very emotional and invested performance as the sickly, simple peasant girl. She is so sweet, humble, and good. She looks very young and innocent in this movie, so she is very convincing as a very young girl. As the film progresses, she makes us believe that she is growing ill. Director Henry King chose her for the part after directing her screen test. When instructed to look past the camera at a shining light, he said that Jennifer didn’t just look; she saw. Her look of adoration whenever the lady appears is one of the elements which makes the film convincing. The rest of the cast provides a strong support. Bernadette’s parents (Anne Revere and Roman Bohnen) truly seem like poor French parents, care-worn but still loving toward their children. Father Peyramale (Charles Bickford), the priest who initially doubts Bernadette’s visions before coming to believe her stories, is a very strong character. One of the most complex characters in the story is Sister Marie Therese (Gladys Cooper). The stern nun seems to dislike Bernadette even when she is just a young girl in school, unable to answer all the questions in her catechism because illness has frequently kept her out of school. Later, that sternness grows to hatred as Bernadette becomes famous because of her visions. This nun’s story shows that the Code did not forbid films from showing members of the clergy as flawed human beings who struggle with sins like envy, skepticism, and hatred. The setting is very realistic, as well. Watching this film, one truly feels that he has been transported to France of the mid-nineteenth century.

This is my second article in Catholic Liturgy Week, hosted by Samantha of Bookshire and Megan Chappie of The Pen and the Cross. Although the Code was written by Catholic layman Martin Quigley and Jesuit priest Father Daniel A. Lord and enforced by another very devout Catholic, Joseph Breen, it was not a Catholic document. Unlike the Catholic Legion of Decency, which was strictly a religious body, the Production Code Administration (PCA) was a secular group. However, they certainly did not discourage the inclusion of religious themes and characters in films, which added a serious, uplifting tone to movies. While many primarily secular films included one or two religious characters or a sacred scene or two, some movies were completely dedicated to religious themes. Such movies, such as Going My Way (1944), The Bells of St. Mary’s (1945), and, of course, The Song of Bernadette, usually centered on Catholic characters, often priests or nuns. Some other films, like San Francisco (1936), Boys Town (1938), and The Miracle of the Bells (1947), feature priests as important characters in addition to non-clergy characters. These days, when movies focus on religious characters and themes, they are almost always made by Christian companies. Thus, their release and audience are very limited. They often don’t even play in many big theaters, finding viewers on Christian television stations. However, in the Breen Era, movies made by the major Hollywood studio unapologetically included Christian themes and characters. They obviously appealed to a majority of Americans, since Going My Way and The Bells of St. Mary’s were the top-earning films of 1944 and 1945, respectively. They also were very well-made pictures, winning prestigious awards. Going My Way won an Academy Award for Best Picture, and The Song of Bernadette won the first Best Picture Golden Globe. Under the Code, movies didn’t have to be religious. However, it is very refreshing to watch uplifting, inspiring faith-based films like this, which were made during the era when American truly was One Nation Under God.