Welcome to the thirteenth new Code film review of July, which is #CleanMovieMonth2020! Throughout 2020, I have been watching and reviewing American Breen Era (1934-1954) films which I have never seen before in 100 New Code Films, my semi-weekly series. During July, I am adding to these by writing twelve additional new Code film reviews to make twenty reviews in all. I am enjoying this chance to watch an unlimited amount of new Code films. 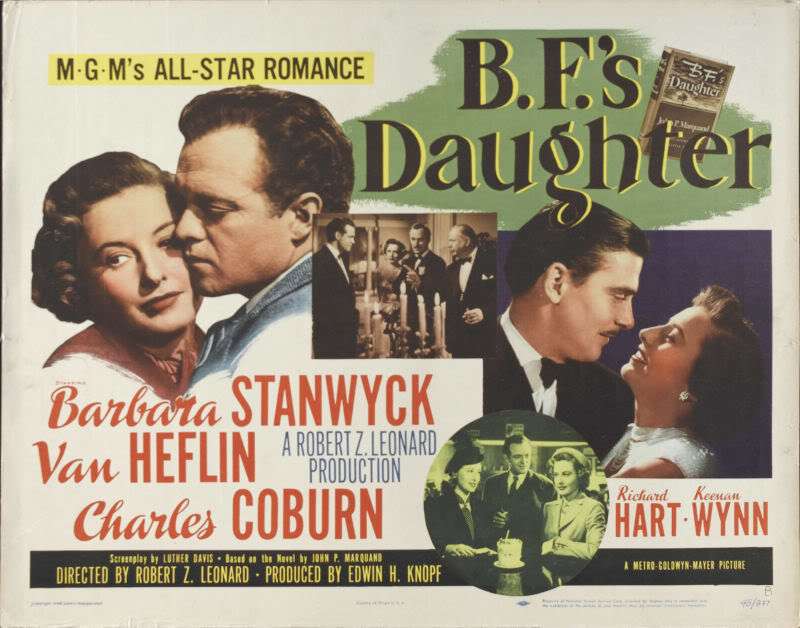 A self-made tycoon’s daughter is engaged to a sensible young up-and-coming lawyer during the Depression, yet she falls for a penniless educator and lecturer who politically disagrees with her father. The unlikely couple falls in love and weds, but she secretly uses her father’s money to start his lecture career and make him a big man.

I really enjoyed this movie. I thought it was a great role for Barbara Stanwyck. She and Van Heflin are a great pair. They have a very charismatic relationship in The Strange Love of Martha Ivers (1946), a mystery which they made two years earlier, and that is apparent in this film, as well. It is nice to see them as husband and wife instead of unrequited sweethearts, as in their earlier film. Van Heflin creates a very unusual role for himself as Thomas Brett. He has more idiosyncrasies in this part than in any of his other roles which I have seen. He has unique little mannerisms which make him seem very real. Charles Coburn’s B.F. Fulton is the third most powerful character in the film. He has a commanding energy and masterful nature which dominates every scene in which he appears. His presence is so strong that it can even be felt when he is no longer in the film. Keenan Wynn also plays an important part in the story. As cynical radio commentator Martin Ainsley, he alternates between being likable and despicable, since he is a friend of Tom while being at odds with B.F. A new face for me was Richard Hart, who played Robert S. Tasmin III, Polly’s (Barbara Stanwyck) dull fiancé. This is one of the few movies he made, since he died in 1951 at only thirty-five. However, in this movie, he goes from being very uninteresting in the early part of the film to becoming suddenly heroic as the years pass and World War II begins. Polly’s best friend is Apples Sandler, played by Margaret Lindsay, another pre-Code Warner Bros. actress. She is very effective in the role of a society woman, frivolous enough to say that everything is “divine” but showing surprising depth when the frivolous Prohibition years give way to the serious war years. Spring Byington is perfect as Polly’s mother. An interesting bit of trivia is that a minor character, Major Isaac Riley, is played by Thomas E. Breen, the youngest son of Joseph I. Breen. After serving in World War II, Tommy Breen acted in a few movies, including a supporting role in Luxury Liner (1948) and a starring role in The River (1951). In B.F.’s Daughter, we only see twenty-four-year-old Tommy in one scene. He is a young Air Force pilot who is going to take Bob Tasmin, now an Army colonel, on a dangerous reconnaissance mission. The ironic thing is that this scene takes place on Guam, where Thomas, as a twenty-one-year-old Marine, actually lost his right leg in combat. Getting to see the great PCA director’s son on camera is an interesting bonus to this film.

This is my second entry in The Queen of Sass: Barbara Stanwyck Blogathon, which is being hosted by Gabriela of Pale Writer in honor of Barbara Stanwyck’s 113th birthday. Miss Stanwyck gives a wonderful performance in this film. The title tells us everything there is to know about Polly Fulton. First and foremost, she is B.F.’s daughter. Her whole life has been shaped by her father’s money, power, and influence. However, as much as she likes being B.F.’s daughter, she is not completely satisfied with the life he has planned for her. Polly is too much like her impetuous and strong-minded father to happily wait for months for Bob to be promoted to junior partner so that they can get married. Rather than settle down in a boring little suburban house, she wants to run away to the South Seas! Most of all, she wants someone who needs her. Bob doesn’t need her, but Tom does. He needs her to straighten his tie, sew buttons on his coat, and, in her mind, ensure his career with her father’s money. She thinks that her fortune could be used just to give him a start, since she knows his intelligence and big ideas will carry him from there. However, Tom wants to be married to Polly Fulton, not B.F.’s daughter. Throughout their marriage, she struggles between her dual roles as wife and daughter. A major rift occurs in their marriage after Tom discovers how much B.F.’s fortune has helped him. He proceeds to be sharp with B.F. at dinner that evening, which alienates him from Polly for years. Stella Dallas, the other film I reviewed for this blogathon, shows a couple who doesn’t fight for their marriage and suffers for years as a result. In contrast, B.F.’s Daughter shows a couple who learn that they must fight for their marriage.