This is the twelfth new Code film review in #CleanMovieMonth2020! During July, we are publishing twelve extra reviews of American Breen Era (1934-1954) films in addition to the regular eight 100 New Code Films reviews we would publish. This will equal twenty, the special number of this year’s celebration. I have been enjoying the opportunity to watch an unlimited number of Code films during this month, and I am excited to share another discovery with you. 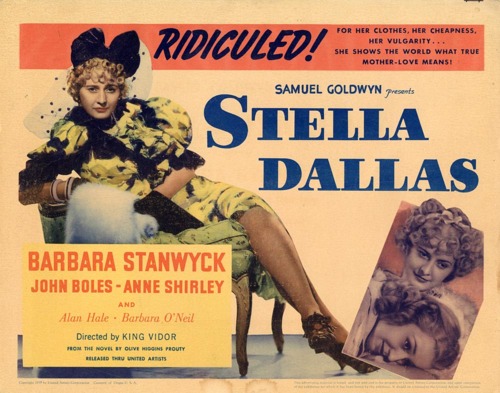 A working class girl marries the son of a ruined New York tycoon, hoping to learn refinement through him. After their daughter is born a year later, however, she refuses to go to New York with him, eager to enjoy the society she has at last achieved.

This is an excellent film. It deserves the acclaim it receives. This is a movie which spans a large amount of time, showing its characters change and transition as the years pass. That affords the opportunity for the actors’ appearances and personalities to change, as well as for multiple actors to play one role, as in the case of Stella’s daughter, Laurel. Even though the separation and eventual divorce of Stella (Barbara Stanwyck) from her husband, Stephen Dallas (John Boles), plays a large part in this story, that doesn’t make this is a poor Code film. Divorce is certainly not shown favorably by this story. Stella and Stephen’s hasty marriage and failure to fight for it results in suffering for all three of them. Stella must face the agony of realizing that her crassness is hurting her daughter; also, she must let her daughter leave her to spend time with her father. Ultimately, she must send Laurel to her father for her own good. Stephen must be only a visiting parent for all of his daughter’s life, seeing her only on her vacations and during holidays. Like any loving father, he wants to be with his daughter all the time, but his disagreement with her mother keeps them apart. Ultimately, Laurel (Anne Shirley) suffers a great deal for something which is not her fault and out of her control. She never knows the joy of being raised by both her parents. When she is young, she thinks that her father just has to be in New York because of his work, so she can only see him occasionally. Having to choose between her parents is a terrible situation which she faces. These three actors bring these deep, painful emotions to life with great talent and believability. An important supporting character is Ed Munn, played by Alan Hale in his least likable role I have seen so far. He is a very shifty gambler who ultimately is the beginning of the disagreement between Stella and Stephen. He represents the cheap, vulgar, flashy existence which Stella wants but which Stephen thinks is not proper for her, himself, or their child. This is a very subtle and nuanced story which will touch your heart.

This is my first entry in The Queen of Sass: Barbara Stanwyck Blogathon hosted by Gabriela of Pale Writer. I chose to  watch this film because Barbara’s performance in it won her her first Academy Award nomination. She certainly deserved it. This role is very impressive because she changes a lot during its course. When the movie begins, she is a very pretty young lady who is obviously uncultured but who wants to become refined. Once married to Stephen, she is less eager to follow his instructions regarding proper taste, insisting on wearing gaudy jewelry and accessories. After they have separated, she gives up all pretenses toward properness, reverting to common language and tasteless clothes. As the film progresses, her accent becomes stronger and stronger, until she eventually sounds like character actress Thelma Ritter. This isn’t surprising, since both ladies were born in Brooklyn. I was very impressed by the fact that Barbara did not look good for most of this movie. Although still young and attractive, she convincingly aged and lost her beauty as the movie progressed. She wore unflattering or very sparse makeup, her hair was badly dyed blonde and unkempt, and she just kept gaining weight. This effect was achieved by padding her clothes, and it was very effective for making her look dumpy. Her appearance was just the backdrop, however, for her emotional performance. Although lacking class and good taste, Stella Dallas is a mother who truly loves her daughter. She will do anything to see that she gets the things she deserves. Barbara’s performance makes this very real.

One thought on “#CleanMovieMonth2020 #12. “Stella Dallas” from 1937; “Barbara’s First Oscar Nomination” for The Queen of Sass: Barbara Stanwyck Blogathon”