Today is Wednesday, and I am going to write my first 100 New Code Films article of the week. This is the second week of July, which is #CleanMovieMonth2020 here at PEPS. In this celebration of the American Breen Era (1934-1954), I am reviewing twenty new Code films. In addition to the twelve short reviews I am writing particularly for this monthlong event, I am still writing my customary two articles per week as part of this series. Although I will end up watching more than 100 new Code films this year because of the extra movies I am watching during July, I still will watch and review exactly 100 Code movies I have never seen before in this series.

Today’s topic is Lili from 1953. A couple of Sundays ago, my mother suggested this as a film to watch with breakfast. She had recently added it to the watchlist, since it looked like a fun movie to her. I had heard of it before. We all agreed that it sounded charming. We purchased the film on Prime Video and watched it. A sixteen-year-old orphan arrives in a strange French town in search of a friend of her father, only to find that he recently died. After a magician rescues her from a lecherous shopkeeper, she follows him to the carnival where he works. When she realizes that her beloved magician doesn’t care about her, she considers committing suicide until some puppets “talk” to her. When patrons observe and love her charming interaction with the four puppets, the moody puppeteer, a former ballet dancer whose career was ended when he leg was injured in the war, hires her as his permanent assistant. Little does the young lady know that the puppets’ kindness toward her is really the tortured puppeteer’s only way of expressing his true feelings for her.

This movie was directed by Charles Walters. It was produced by Edwin H. Knopf. The production company was MGM. The screenplay was written by Helen Deutsch, based on a story by Paul Gallico. This movie was nominated for Academy Awards for Best Actress for Leslie Caron, Best Director for Charles Walter, Best Screenplay for Helen Deutsch, Best Color Cinematography for Robert H. Planck, and Best Color Set Decoration for Cedric Gibbons, Paul Groesse, Edwin B. Willis, and Arthur Krams. It won an Oscar for Best Scoring of a Dramatic or Comedy Picture for Bronislau Kaper. At the Golden Globes, it won Best Screenplay for Helen Deutsch. Leslie Caron won Best Foreign Actress at the BAFTA Awards, where the film was also nominated for Best Film from Any Source, USA. 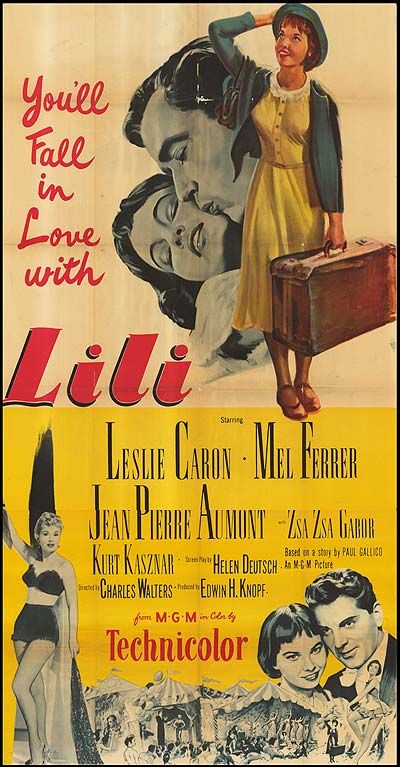 This is a fair Code film. I would like to say that every new movie from the American Breen Era that I watch is a good or perfect Code film, and a pleasantly large number of them are. However, there are those exceptions, the fair, poor, and non-Code films. Their Code violations teach us more about the PCA’s self-regulation and help us to appreciate the ones that are completely Code-compliant. This particular movie has a few issues which make it a fair Code film rather than a good one. In the film’s first scene, young Lili (Leslie Caron) looks for her father’s friend, only to find that he has died. A shopkeeper says that he can give her a job and brings her into the store, offering her food. However, a moment later, he is making improper advances to her! From the first moment we saw this man, every member of my family was suspicious of him, although he didn’t say or do anything untoward at first. There was just something untoward about his manner. Thankfully, Marc (Jean Pierre Aumont) comes into the store just as Lili is trying to escape the man. I thought that this situation was a little too pointed. As a result, it cast a tawdry air over the rest of the romantic relationships in the picture. From then on, I was suspicious that every man had licentious intentions toward Lili. Fortunately, no one else did. Rebekah said that thought the fact that Lili was only sixteen was inappropriate. Usually, May-September romances don’t bother us, but I had to agree that the choice to make the twenty-two-year-old actress’s character a sixteen-year-old girl was rather odd, especially because she was older than that in the novella. If she were eighteen, she may have seemed less vulnerable. Later, when Marc is doing a magic trick with his beautiful assistant, Rosalie (Zsa Zsa Gabor), he magically makes her dress fly off, leaving her in what looked like only a frilly black brassiere and panties. Also, in an earlier scene, Lili contemplates suicide before being saved by a puppet “greeting” her. Aside from these tangible Code violations, there are very dark undertones in the film. Perhaps it is the carnival setting, something which always is both fanciful and sinister. Maybe it is the eerily sweet tunes and interactions with the puppets. Perhaps it is that the film seems foreign due to its large number of European performers. I think, most likely, the dark feeling comes from the source material. This movie was based on an unpublished novella by Paul Gallico called Love of Seven Dolls. Unlike its predecessor, a much lighter short story called The Man Who Hated People, this story features a puppeteer who is abusive to the Lili character. It was on the novella and not the 1950 short story that the film was based. Although the abusive and criminal elements from the novella were not included in the actual film, the undertones remained. I’m sure that many people would not perceive this, but my father, sister, and I agreed that the phantoms of the dark source material were present in this film, making it less than a good Code film even if it didn’t contain the surface problems.

I recommend this film. It contains excellent acting. Although the undertones I discussed in the previous section made the film rather dark to me, they gave this film depth. This movie can’t be called a fluffy, shallow 1950s musical. It has excellent acting. Leslie Caron gives a very emotional and deep performance as young Lili, the girl who thinks she is deeply in love with the magician because he is the first person to show her any kindness. Mel Ferrer is very tortured and brooding as Paul Berthalet, the phantasmal puppeteer. With his tall, thin frame, he is convincing as a former danseur. His troubled nature, subtle limp, and alcoholism made me pity Paul, but I can’t say I developed a deep sympathy for the character. Other characters, like Marc, the flirtatious magician, Jacquot (Kurt Kaszner), Paul’s kind, considerate assistant, and Rosalie, Marc’s beautiful and possessive assistant, add color to the story. The puppets, supplied and operated by Walton and O’Rourke, are very well-executed and endearing. The moments when Lili converses and sings with them are very touching yet heart-breaking, since her dearest friends are made out of wood. There aren’t many musical numbers in this film. The main song is “Hi-Lili, Hi-Lo,” is sung by Lili and the puppets. It is a very memorable tune with cute lyrics which tugs on your heartstrings. I thought that better use of Miss Caron’s dancing talents could have been used. Her character states that she can’t dance. Thus, the only dancing she does is in two dream sequences. Firstly, she dreams about Marc and Rosalie in a dancing fantasy which is strictly jazz dancing. Later, she imagines she is watching down the road with life-sized puppets, who gradually turn into Paul one by one. She does jazz and ballroom dancing in this sequence, but again, no ballet. I was very surprised that she didn’t don toe shoes once in this movie, since she does in her other musicals which I have seen. I thought that the opportunity for a ballet sequence was particularly missed because Paul is a former danseur and Leslie Caron was a professional ballerina. It would have been very dramatic for either Paul or Lili to have a dream sequence in which she is dressed like a ballerina and dancing around as Paul either imagines he is dancing with her or finds himself unable to. Anyway, that is just my thought. I did enjoy this movie, although I found it a bit haunting and unsettlingly foreign in feeling. However, this has been a beloved movie since its release. I’m sure that many would like this movie without any reservations. It is a very good film and an excellent performance from Leslie Caron. I suggest that you see it yourself and form your own opinions. If you have seen this movie, let me know what you think of it!