Today is Wednesday, and we’re going to publish our first 100 New Code Films article of the week. This is also article #1 in #CleanMovieMonth2020, which begins today! Here at PEPS, July is dedicated to celebrating movies made during the American Breen Era (1934-1954). Because this year is 2020, twenty is the theme of this year’s #CleanMovieMonth celebration. Thus, I am going to review twenty different Code films about which I have never written before during July. Some of these articles are going to be part of this semi-weekly series about Code films which we have never seen before. Since I already watch and review two new Code films every week in this series, that is a good beginning toward the goal! 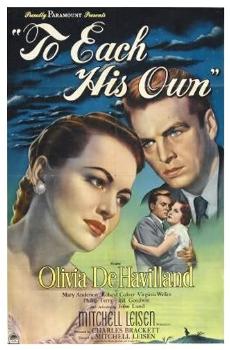 Today’s topic is To Each His Own from 1946. Since I have determined to watch 100 new Code films this year as part of this series, I decided to add many award-winning and acclaimed films to my watched list during 2020. I made a list of all the films which won Oscars for Best Picture, Best Director, Best Actor, and Best Actress between 1934 and 1954 which I had not seen yet at the beginning of the year. I decided to watch as many of them as possible. Olivia de Havilland won two Best Actress Oscars in the 1940s, the first for her performance in To Each His Own (1946) and the second for her performance in The Heiress (1949). I saw The Heiress last year, so I decided to write about Olivia de Havilland’s first Oscar-winning performance for the Olivia de Havilland Blogathon. I watched this movie on ok.ru this morning to kick off #CleanMovieMonth2020! 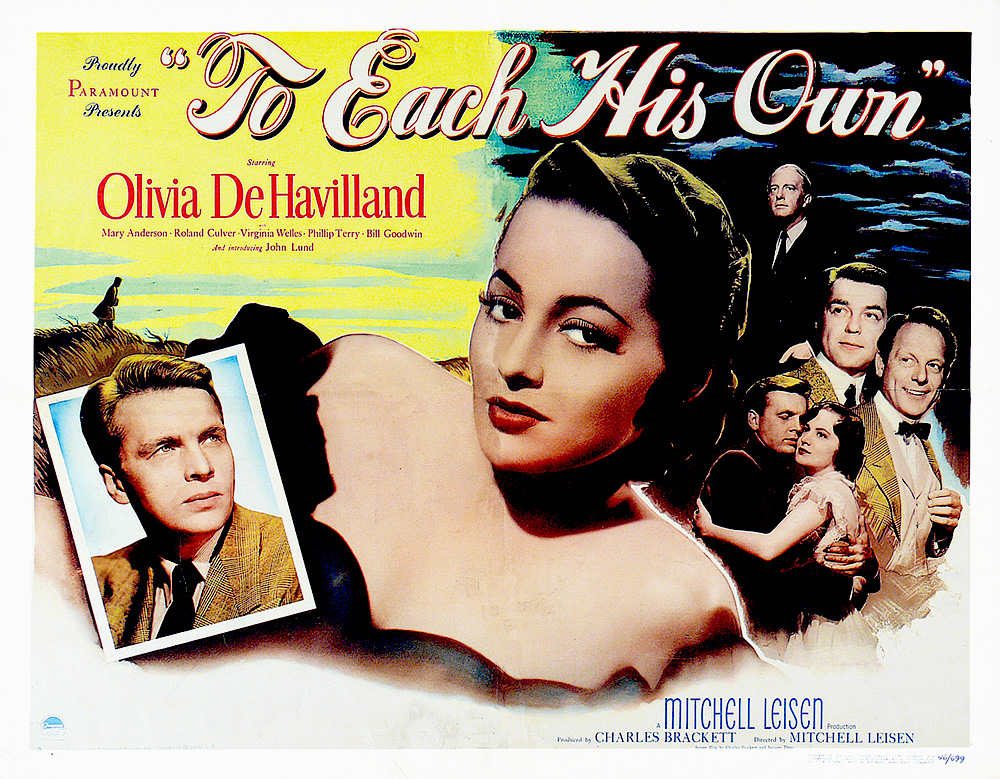 During World War II, a middle-aged businesswoman accidentally befriends another middle-aged drifter when she saves his life during fire patrol on New Year’s Eve. She agrees to dine with him that evening but abruptly breaks the date when she learns that a certain young pilot is coming to London that evening. As she waits in the train station, she remembers her youth in a small New York town, when she fell in love with a dashing pilot during World War I, only to be parted from him forever after only a few hours. He is killed, and she bears their son alone, unable to claim him as her own without dooming him to disgrace. To make her son happy, she must deny her claim of motherhood. 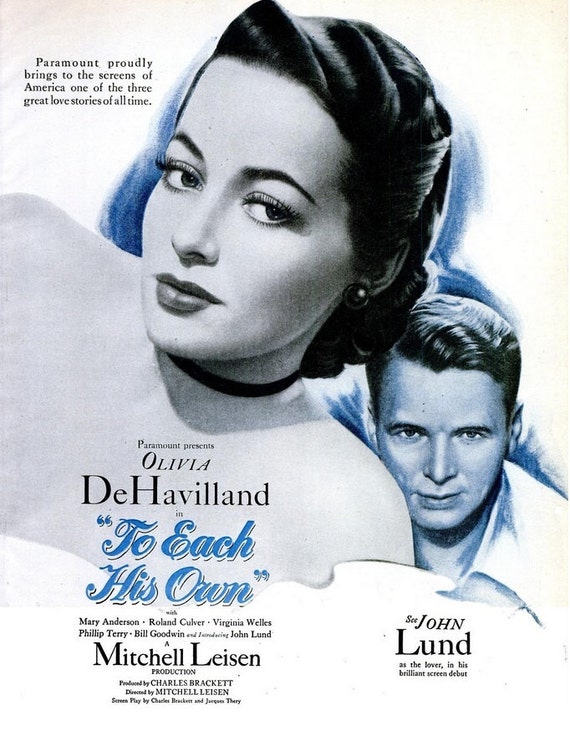 This is a perfect Code film. I’m so glad that we can begin the month with a perfect Code film, especially one which won an Academy Award! The Academy gravitated toward dramatic material. Unfortunately, not all Oscar-winning pictures were outstanding film in terms of Code compliance. That’s why I am glad to say that this is really an outstanding film. It handles a very difficult subject superbly, namely unwed motherhood. This film shows how illegitimacy effects everyone involved, both mother and child. To save her son from the stigma of being illegitimate, Jodie Norris (Olivia de Havilland) sacrifices her own desire to raise him as her own. The whole situation is handled so properly. Firstly, the brief romance between Jodie and the visiting pilot, Captain Bart Cosgrove (John Lund), which produces her son is not depicted suggestively at all. We just see them kissing in a field, standing very properly, before the scene fades out. When we learn that Jodie is expecting a baby, we infer the rest. However, this illicit romance is never condoned. Jodie is fully repentant of this affair. Although her father (Griff Barnett) is very sympathetic, he does not ignore her sin. She pays for her sin by being unable to claim her beloved son, Griggsy, the one person in the world she has. Ultimately, motherhood is glorified, and the importance of marriage is clearly shown.

I highly recommend this film. It is magnificent! The acting is absolutely superb. In addition to Olivia de Havilland’s marvelous performance, this film features a very strong performance from John Lund in his film debut. As both father and son, Mr. Lund embodied two separate characters who were very different yet possessed a similar nature. One of the film’s most dramatic performances is given by Mary Anderson as Corinne Piersen, the woman who marries Jodie’s former beau, Alex (Phillip Terry), and ends up raising her son after her own baby dies. Her jealousy of Jodie, the woman who has everything yet nothing, is very real. Alex is a conflicted character, seeming to care for his wife and children yet also still harboring love for Jodie. Another of Jodie’s beaux, Mac Tilton, is played by Bill Goodwin. When Jodie encourages him to start a legitimate cosmetic business after his Prohibition Era bootlegging operation is raided, it gives her a new purpose in life. Griff Barnett is very sympathetic as Jodie’s loving father, the druggist who is always there for his daughter. A small but poignant role is played by Victoria Horne as Daisy Gingras, a maternity ward nurse who guesses Jodie’s secret and eventually becomes her business partner. A charming character who plays a large part in the World War II sections is Lord Desham (Roland Culver). After Jodie saves his life, he goes from being a strict grouch to a lovable, compassionate hero! This film’s story is presented in a very interesting way through the use of flashbacks. As in any film of this kind, it is so delightful to see Olivia in the bloom of her youth when the first flashback begins, having seen her as a serious middle-aged woman so far. Then, we watch her grow back into the woman as the years pass. The score is very dramatic and compelling, adding a beautiful backdrop to the moving story. This is a wonderful film. It is emotional and dramatic while also being sensitive and heartwarming. It will bring tears to any mother’s eyes.

This is my entry in The Olivia de Havilland Blogathon, which is being hosted July 1-2 by Charity of The Sacred in the Secular. I want to thank Charity for hosting this year’s celebration for Olivia, one of the last glowing stars of Hollywood’s Golden Age. Today, Dame de Havilland turns 104 years old! It’s almost unbelievable that she is still alive! Happy Birthday, Olivia! She certainly deserved her Academy Award for this film. She delivers such a wonderful performance. She changes her character throughout the film, going from a warmhearted, sensitive young girl to a serious, lonely mature woman. However, she shows us that her sweet heart isn’t gone any more than her beauty is. Every time she sees her son, she becomes that young girl again, filled with a warm glow of youthful life because of him. Her heroine is truly this film’s protagonist, since there is no definite leading man for much of the film. John Lund’s characters come and go, and Roland Young is not featured in the flashbacks. Thus, Dame de Havilland carries the narrative with her wonderful performance. I truly loved this film, and I loved her in it. I recommend this film wholeheartedly to Olivia de Havilland fans and all classic movie lovers!