Today is Sunday, so it’s time for the second 100 New Code Films article of the week. This is the 50th article, so we’re halfway through this series! Since this is the end of the twenty-sixth week in 2020, we are also halfway through the year, so we’re right on schedule. The purpose of this series is for me to watch and review 100 American Breen Era (1934-1954) movies which I have never seen before. I will achieve this by watching two new Code movies in all but four weeks this year. In those four extra weeks, I will only watch one new movie. 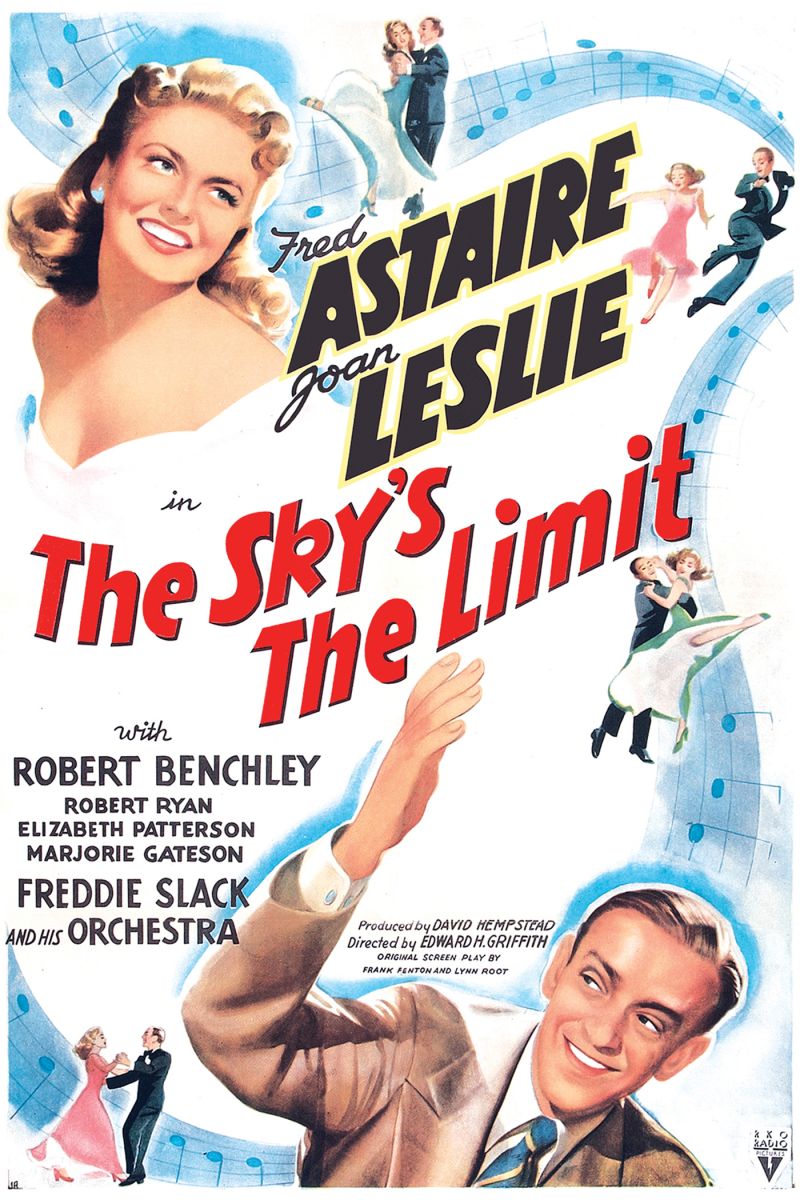 Today’s topic is The Sky’s the Limit from 1943. This movie came up on Amazon Prime when I searched Fred Astaire. I was surprised that I had never heard of the film or its leading lady. When I needed to watch my second new Code film of the week on Thursday evening, I decided that this sounded like a nice option. Fred Astaire’s movies are always charming, and I haven’t reviewed a musical in a while.

A World War II pilot is given a ten-day leave and is sent on a goodwill tour with the other heroes in his outfit. However, he wants to meet a girl who will learn to like him as a person, not just a war hero. He gets off the train goes to a nightclub, where he sees a beautiful female photographer. Determined to meet the young lady but not spend all their time together talking about his war deeds, he persistently follows her and introduces himself under a false name. He takes a room in the building where she lives, determined to win her heart in the few days he has. She finds herself falling for him, so she is eager to give the shiftless nobody some purpose in life. 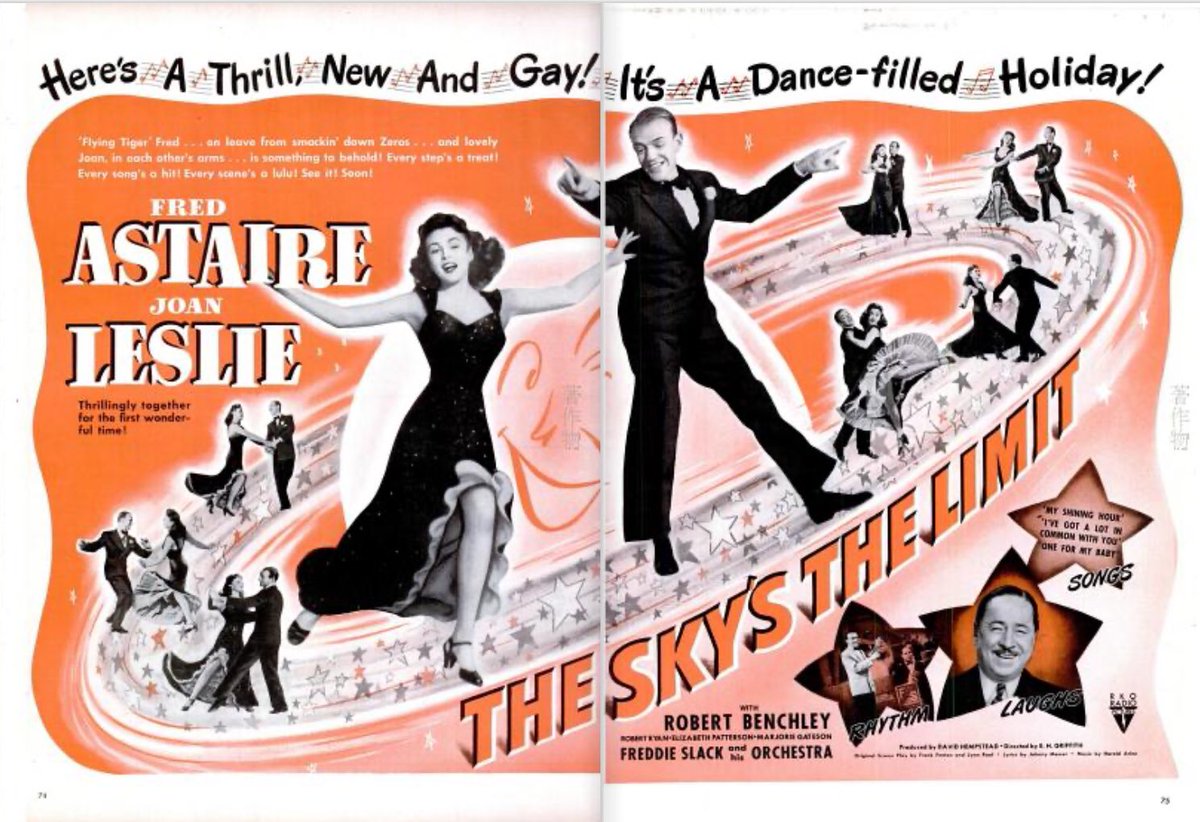 This movie was directed by Edward H. Griffith. It was produced by David Hempstead with associate producer Sherman Todd. The production company was RKO Radio Pictures. The original screenplay was written by Frank Fenton and Lynn Root. This film introduced three original songs with music by Harold Arlen and lyrics by Johnny Mercer, “My Shining Hour,” “A Lot in Common with You,” and “One for My Baby.” This is a good Code film. It is completely wholesome and decent. There is no content in this film which would make it objectionable for any viewer. Every line, costume, dance, lyric, and scenario is Code compliant. This is one of those lovely, lighthearted, clean musicals which just lifts your spirits. It is a beautiful example of a good Code film.

I highly recommend this film. It is really enjoyable. Fred Astaire’s full talent is on display in this movie. He doesn’t wear his famous top hat and tails ensemble, but he is just as suave and charming in more casual costumes. His dancing is amazing, his singing is charming, and his acting in this funny but determined role is really endearing. For the first part of the film, I was disturbed by the fact that I didn’t recognize leading lady Joan Leslie by name or appearance. However, when she and Fred were performing “A Lot in Common with You,” Fred said, “Where’s Hayworth?” and Joan said, “Where’s Cagney?” I remembered that Rita Hayworth was in two movies with Fred Astaire in 1942, so I began wondering if Miss Leslie was in a movie with James Cagney. Suddenly, I recognized the dancing actress as the leading lady in Yankee Doodle Dandy from 1942. I enjoyed her performance even more after recognizing her. She gives a very good performance as the motivated young photographress who is eager to do something useful in the world and is bothered that Fred doesn’t feel the same way. She is very caring. She doesn’t do her own singing, but her dancing is very good. She really keeps up with Fred in “A Lot in Common with You,” their big dance number. I thought the best musical number in this film was “One For My Baby,” Fred’s big number in a tropical bar which reminded me of Disneyland’s Tiki Room. I had no idea that this Frank Sinatra tune that starts “Set ’em up, Joe” originated in this film. Fred’s rendition is really charming. After singing it in an increasing state of drunkenness during a montage showing multiple bars, he performs an amazing dance routine in the bar which involves tap dancing on the counter and breaking real glasses with his feet. One of the funniest but oddest moments in the film is when Phil Harriman (Robert Benchley), Joan’s employer and devoted admirer, gives an introductory speech at a banquet. He is unbelievably awkward, clumsy, and yet completely unaware of how boring his speech is. It was so realistic that I was getting uncomfortable just from watching it! The World War II setting gives this film an interesting background. This is a fascinating musical voyage into America during World War II. It shows that, even in the midst of crises, Americans can stay strong by helping each other.