Today is Sunday, so it’s time for the second 100 New Code Films article of the week. In this series, I publish two articles per week, in all but four weeks of the year, that is. This gives me a great outlet for discovering and reviewing American Breen Era (1934-1954) movies which I have never seen before. Some of them are films with favorite actors which I have been wanting to see. Others are award-winning movies which have received great acclaimed. Still others are adaptions of well-known stories. Whatever its background, every Code film I see makes my knowledge of the Breen Era wider and deeper. It also brings me one film closer to my long-term goal of watching every Code film ever made. 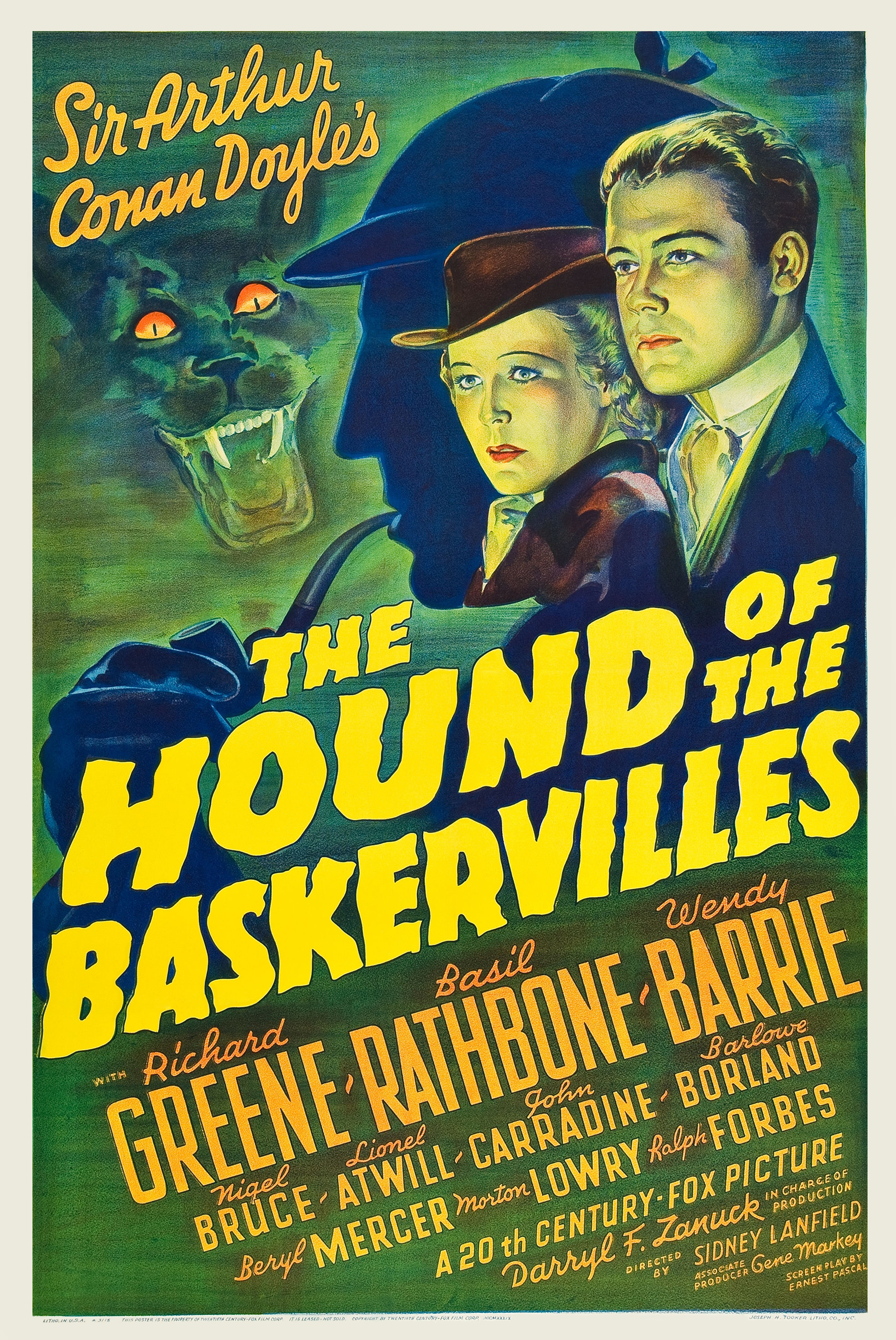 Today’s topic is The Hound of the Baskervilles from 1939. For many years, I have been a fan of Sir Arthur Conan Doyle’s writings on Sherlock Holmes. Ever since I read the first short story in The Adventures of Sherlock Holmes, “A Scandal in Bohemia,” at Barnes and Noble, I have been fascinated by this intriguing character. My father spoke of The Hound of the Baskervilles, having seen the classic film as a boy. I was aware of the fact that Basil Rathbone and Nigel Bruce, two classic actors with whom I was familiar, embodied the famous Holmes and Watson in many old movies. However, I have become much more curious about these film adaptions since my focus on Code films. When I heard about the Basil Rathbone Blogathon, I decided that it was the perfect opportunity to watch the first Sherlock Holmes film the great British actor made. I watched this film on a free channel on Roku last Sunday.

If you have read the Sherlock Holmes novel of the same name, you know this film’s plot. An Englishman who lives on the secluded moors dies mysteriously. Although his doctor attributes it to heart failure, he can’t forget the dog’s paw prints which he saw by the body. He tells the incidents of the strange death to famous detective Sherlock Holmes, informing him of a centuries-old legend regarding a fiendish hound which plagues the family. The doctor fears that his late friend’s nephew, who is arriving from Canada to obtain his inheritance, will likewise be killed by the devil dog. He implores Mr. Holmes to help him, but, after some preliminary research, the detective sends his faithful doctor companion to the moors to research the problem instead. However, the great detective may not be far away. 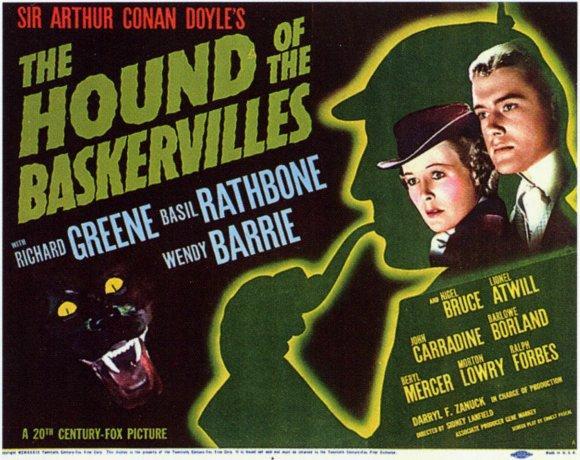 This movie was directed by Sidney Lanfield. It was produced by Darryl F. Zanuck with associate producer Gene Markey. The production company was 20th Century Fox. The screenplay was written by Ernest Pascal, taken from the novel of the same name by Sir Arthur Conan Doyle. This is a fair Code film. This otherwise decent film receives this classification because of two Code violations. The first involves a victim of the hound whose eyes are open after his death. The Code usually forbade the inclusion of open-eyed corpses, since such images are grotesque. I may have still classified this as a good Code film if not for the other Code violation, which is the famous last line. After solving the case, Sherlock Holmes begins to walk out of the room, heading toward his quarters. He then turns back and says, “Oh, Watson, the needle.” Dr. Watson shakes his head and picks up his medical bag before following his friend out. To viewers who are unfamiliar with the source material, this line is meaningless. However, Sherlock Holmes fans will recognize this as a reference to the detective’s cocaine addiction, with a brief reference to morphine, which is mentioned in the short stories and novels. Ironically, the addictive but then-legal drug is not mentioned in the novel The Hound of the Baskervilles. The seven-percent solution of cocaine which Holmes uses to dispel his boredom between cases is first mentioned in the second novel, The Sign of the Four. I was very surprised to hear this reference in the Code film version, since drugs or any reference to them were expressly forbidden under the Code. What I found even more unfortunate than its mere inclusion, however, was the flippant manner in which it was included. The habit is depicted as a very dangerous one which threatens the genius’s mental powers. As a medical man and Holmes’s friend, Dr. Watson abhors his drug use. He never recounts aiding the habit. In a later short story, “The Missing Three-Quarter,” the doctor refers to having weened Sherlock off drug use. He would be the last person to provide him with the hypodermic needle for injecting the poisonous stuff. However, the flippant nature of the line is obviously how it was allowed. I can only say that such an inclusion must not have been approved by Joseph Breen himself but by one of the other PCA members, such as the British Shurlock (Geoffrey) of the PCA. I can only hope that this is the only reference of the kind in the series! Other than these two points, there were some excellent Code points. The violence regarding the hound was minimal and never distasteful. Also, the element of a husband and wife posing as brother and sister was removed, as this complicates the lady’s (Wendy Barrie) romance with young Henry Baskerville (Richard Greene). Also, Beryl was made Jack Stapleton’s (Morton Lowry) step-sister instead of biological sister, eliminating any possibility of relation between her and Henry. 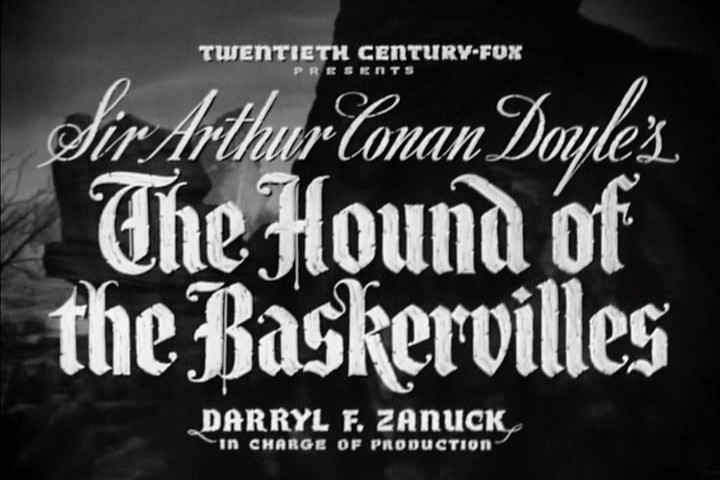 I recommend this film. It is very entertaining just as a mystery film. I think that it can be readily appreciated by those who have never read Sherlock Holmes writing, simply for its execution as a detective film. Indeed, I think it could create fans of the British detective. I can also say without reservation that film would be enjoyable to most Sherlock Holmes fans because of its faithfulness to the novel. Unlike many film adaptions, classic or otherwise, of well-known literary works, this film is extremely accurate to the novel. Many lines were directly quoted from the novel. The acting is excellent in this film; I will provide more opinions on the famous duo in the next section. Richard Green is very gentle and pleasant as Henry Baskerville. Wendy Barrie is charming and lovely as Beryl, a young woman caught between her step-brother and the young man she loves. Supporting characters like Dr. James Mortimer (Lionel Atwill), butler Barryman (John Carradine), Mrs. Mortimer (Beryl Mercer), and Mrs. Barryman (Elly Malyon) add to the suspenseful, uncertain quality of the mystery, aided by a few new details created for the film. The film’s setting really captures the creepy, sinister quality of the moors and the mire where the story takes place. The lighting, costumes, and background music are excellent. In short, this is a compact and highly effective movie which captures the brilliance of Sir Arthur Conan Doyle’s story very well.

This article is my entry in The Suave Swordsman: Basil Rathbone Blogathon, hosted on June 13-14 by Gabriela of Pale Writer. Basil Rathbone’s name is synonymous with Sherlock Holmes. He played the famous detective of Baker Street in fourteen movies. In all these movies, he was accompanied by Nigel Bruce as his faithful companion, Dr. John Watson. In addition to cementing the iconic but non-canonical line “Elementary, my dear Watson,” these films made detecting pair Sherlock Holmes and Dr. Watson even more famous to the general public. 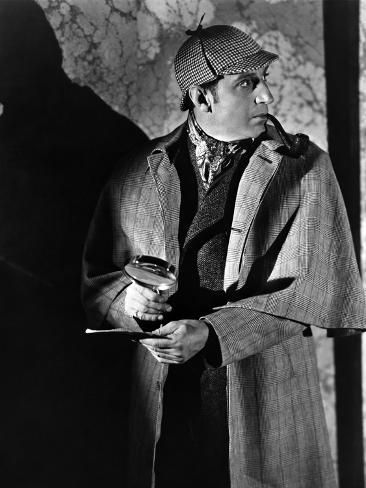 When I heard about the casting of Mr. Rathbone as Sherlock Holmes and Mr. Bruce as Dr. Watson, I was a little unsure about these choices. I was concerned that Basil might be too bland as the great detective and Nigel might be too comical as his assistant. However, I was determined to judge these gentlemen only after I saw their performances. I thought that Nigel Bruce did an excellent job. He was very serious in the role and embodied him excellently. My only regret is that he isn’t as involved in the film’s narrative as in the novel’s narrative, since he narrates the written works. I think this could have been achieved by Nigel Bruce’s voice-over commentary, but I understand why this approach wasn’t taken. I have heard that Dr. Watson became quite bumbling in later films, but I won’t judge them until I see them. I have always appreciated Basil Rathbone’s talent. He can be humorous, witty, and even sinister. I must confess, however, that I found his performance lacking the subtlety which I love in the literary character. It wasn’t that he was too bland, as I feared. In fact, I would say that it is the opposite. I found him to be too energetic. He didn’t seem moody, thoughtful, and mysterious enough. I felt that I really didn’t get to know Sherlock Holmes in this film. I place a lot of this responsibility on the scripting. As previously mentioned, this is a great adaption of The Hound of the Baskervilles. However, that particular Sherlock Holmes story doesn’t provide too much time to delve into the character. I think Basil Rathbone would have had a better chance for creating a really deep Holmes from the start if the first film made had been an adaption of A Study in Scarlet, the novel which introduced the character of Sherlock Holmes to the world. I understand that The Hound of the Baskervilles is one of the most popular stories, but I would have liked to see the Fox film series start from the beginning. That aside, I hope that, in the thirteen later films he made, Mr. Rathbone had more opportunities to delve into this character with his great talent. I can’t wait to see all the other movies in which he played Sherlock Holmes!

6 thoughts on “100 New Code Films – #46. “The Hound of the Baskervilles” from 1939; “Presenting Mr. Holmes” for The Suave Swordsman: Basil Rathbone Blogathon”