Although I usually wait until later in the week, I am going to publish my first 100 New Code Films article of week today. I am publishing this article today in honor of Memorial Day, since my film of choice is a patriotic one. The purpose of this series is to expand my knowledge of the American Breen Era (1934-1954) by watching as many films from that time as possible. I am taking my readers along with me in this journey by reviewing each of the 100 new films I will watch this year. 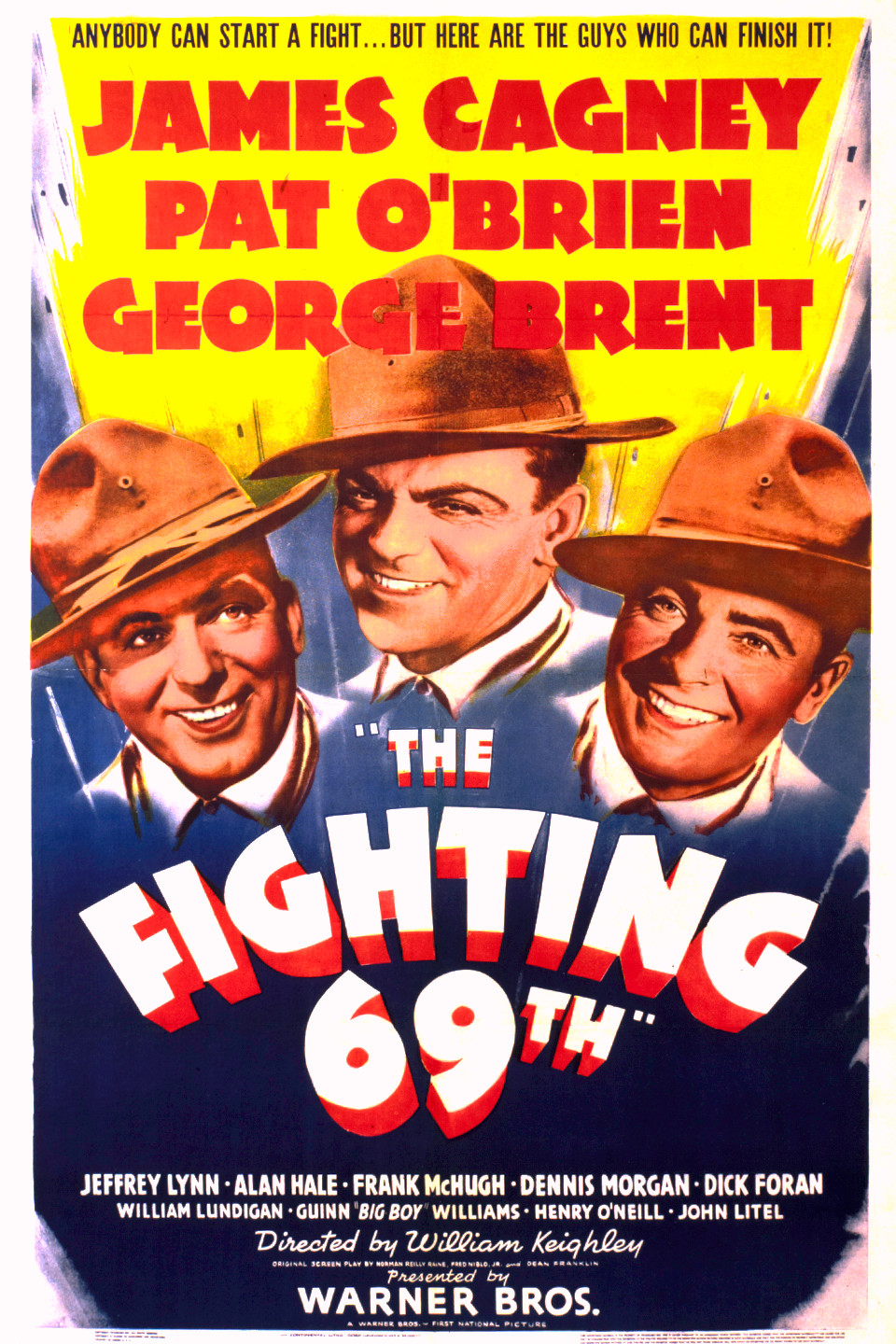 Today’s topic is The Fighting 69th from 1940. I watched this film last Sunday night as research for a Memorial Day article I was writing for the Epoch Times. I heard about this movie years ago, and I thought I would enjoy seeing it because James Cagney is one of my favorite actors. Since I needed to watch a World War I film, I thought about this movie. I found it on a free streaming program, ok.ru, and watched it. 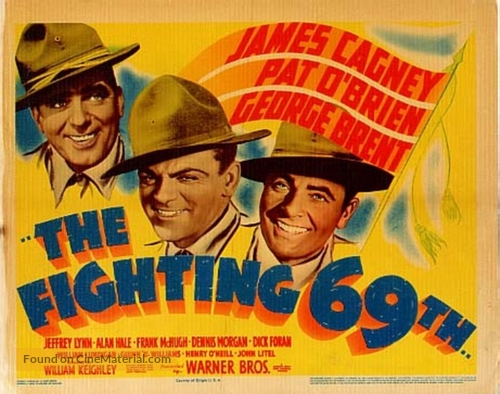 The predominantly Irish 69th regiment of New York trains for European combat during the World War I (World War I) under the military leadership of Major “Wild Bill” Donovan and the spiritual leadership of Father Francis Duffy, a chaplain who is also a soldier. Among the new recruits is cocky rebel who is only in it for himself. He complains throughout training, mocks his fellow men, disobeys orders, and quickly earns the hatred of nearly everyone in the outfit. Only the chaplain has faith in him, believing that there is good in the selfish recruit. Other men in the outfit include the tough but lovable sergeant, his brother, a young recruit he is determined not to favor, a Jewish soldier who pretended to be Irish to get in, and a sensitive young poet. 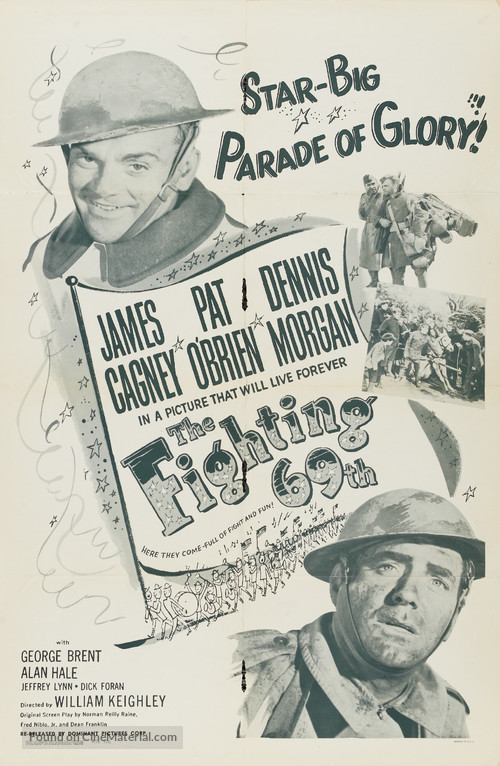 This is a perfect Code film. Although an excited war film about intense combat on the front lines, the action is not overly violent or graphic. This film is not too gory for all audiences to see. The intensity of war is effectively depicted without the gratuitous violence which one finds in post-Code movies and even pre-Code ones, like All Quiet on the Western Front (1930). This movie reaches the rank of perfection, Code-wise, because of its inspiring patriotic themes and uplifting religious messages. The story of Jerry Plunkett’s transformation and redemption is very inspiring, teaching great messages about bravery, selflessness, and the true meaning of what it is to serve. The religious aspects of this film are very inspiring, as well. What I particularly liked about this movie’s religion was its ecumenical message. Although the chaplain is Catholic, he wants to help every man in the regiment to worship God as he sees fit. He helps arrange a Christmas service for the Protestant soldiers in addition to the Catholic mass he gives. Provisions are also made for the Jewish soldiers so that they can worship. His interactions with Mike Murphy (Sammy Cohen), the Jewish soldier whose real name is Mischa Moskavitch, are very touching. Although a Judaist, Mike volunteers to help build a pulpit for a Christian church service. When he asks to attend mass because no synagogue is available, Father Duffy happily welcomes him. After he has been wounded, he asks Father Duffy to help him pray, and the priest solemnly reads a Jewish prayer, ending with Hebrew words. Although they have different religions, they have the common faith of believing in God. This kind of loving acceptance was one of the founding ideas of the Code. The patriotic and religious messages are as inspiring and valuable today as eighty years ago.

I highly recommend this film. It is a masterpiece. I really loved this movie. The acting in it is excellent. James Cagney is, as always, extremely believable as a scoundrel. However, there is a sensitivity beneath his rough demeanor which made me agree with Father Duffy that Plunkett had hope. This is the first time that I have seen Pat O’Brien as a younger man, having only seen him as the cop in Some Like it Hot (1959) up until now. With all the Warner Bros. films I have enjoyed, it’s hard to believe that I am just now delving into Mr. O’Brien’s work. After all, he was one of Joseph Breen’s friends, a member of the “Irish Mafia.” Father Duffy is wonderfully wise and devoted to the cause of righteousness, yet he also has the Irish fight which gives him a bit of humor and fearless determination. He is the strongest character in the film because he relies on his faith in God the whole time, and it never fails him. George Brent is a prudent and brave leader as the head of the regiment, helping his men to overcome their personal prejudices and fears to become a powerful team. The rest of the cast, from Alan Hale to Frank McHugh, is wonderful, as well. Every actor adds so much. The script is exciting, tender, occasionally humorous, and even tear-inducing. This is a wonderful movie. 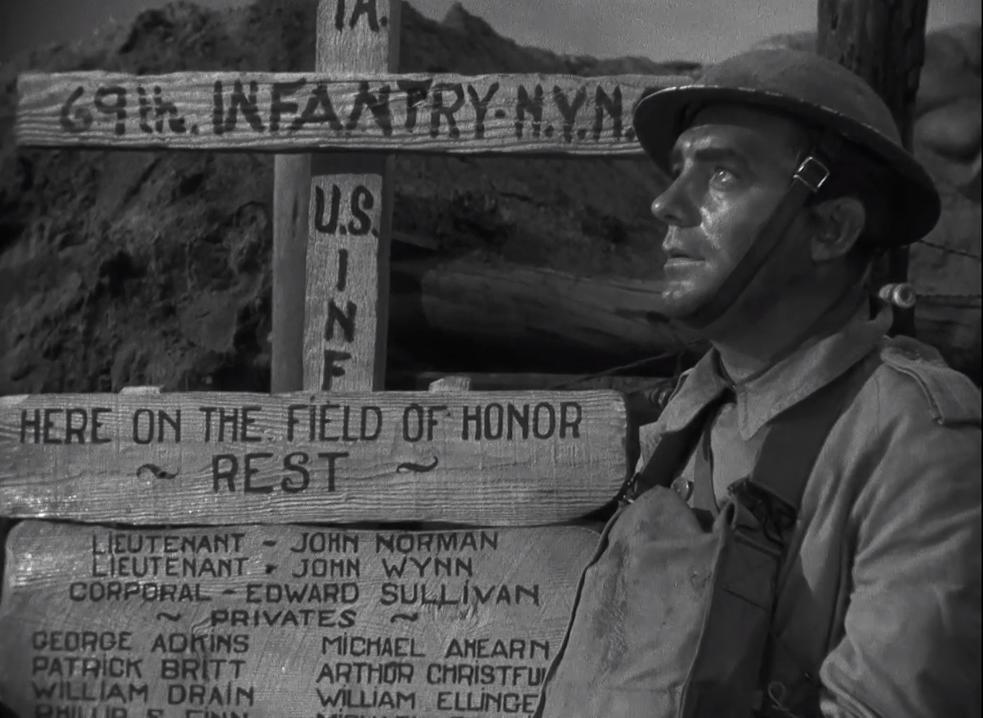 This is a perfect film for Memorial Day, the holiday dedicated to soldiers who lost their lives fighting for our freedom. Unlike some war films, which are careful to preserve the leads while allowing insignificant characters to die, this movie is unafraid to show the death of many important characters. It shows the price of war but also the wonderful victory and ideal which every life helped win. Although Memorial Day has been celebrated on a Monday since 1967, the holiday was traditionally observed on May 30. In honor of this traditional date, we are honoring soldiers, patriotism, fallen servicemen, and all American Armed Forces all week here at PEPS. In most loving and grateful memory, we conclude this article with Father Duffy’s beautiful prayer for remembrance of fallen World War I soldiers. It applies equally to those who served in the Revolutionary War, the War of 1812, the Civil War, the Spanish American War, World War II, the Korean War, the Vietnam War, and every other war in which Americans fought.

“O Heavenly Father, hear, I beseech You, the prayer of this, America’s lost generation. They loved life, too, O Lord. It was as sweet to them as to the living of today. They accepted privation, wounds, and death, that an ideal might live. Don’t let it be forgotten, Father. Amid turmoil and angry passions, when all worthwhile things seem swept away, let the tired eyes of a troubled world rise up and see the shining citadel of which these young lives formed the imperishable stones. America, the citadel of peace, peace forevermore. This I beg of You through Christ our Lord. Amen.”

Click here to read my Memorial Day article for the Epoch Times, in which I recommend this and two other Code films, The Last Outpost (1951) and They Were Expendable (1947), as movies to watch for Memorial Day.