Today is Sunday, so it’s time for the next 100 New Code Films article. Twice every week, I publish two reviews of American Breen Era (1934-1954) films which I have never seen before. I will only make an exception in four of the weeks in 2020, in which I will watch only one new Code film to reach the number of 100 new movies in all. The purpose of this series is to motivate me to watch many hitherto unseen Code films this year. The reviews give me an outlet for analyzing and describing all of these movies. I hope that my readers are enjoying this series as much as I am.

Today’s topic is Ziegfeld Girl from 1941. I signed up for The Great Ziegfeld Blogathon, which is being hosted this weekend. When I found out about this blogathon, I had recently discovered the film Ziegfeld Girl on Amazon Prime when searching for new movies. My family had considered watching that film on evening in April but decided to watch Athena from 1954 instead. When I heard about the blogathon exclusively dedicated to Flo Ziegfeld, his follies, and all the artists he discovered and inspired, I decided that this was the perfect opportunity to watch and review the only MGM “Ziegfeld” movie I hadn’t seen yet. We watched this movie on Amazon Prime Video on Wednesday evening. 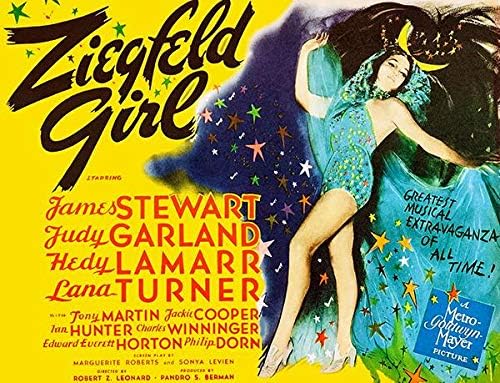 Three young women are discovered by Flo Ziegfeld. One is an elevator operator from a poor family, another is a performer in a vaudeville act with her father, and the third is the beautiful wife of a violinist who auditions for the Follies orchestra. They all end up getting hired as Ziegfeld Girls. All three achieve success but discover that difficulties come along with them. The first girl gives up her truck-driver beau for a wealthy older man who can give her beautiful things, leading to a meaningless life drowned by alcohol. The second has to be separated from her father for the first time, as he goes on the road while she goes with the Follies. The third separates from her husband, who doesn’t like her making money by displaying herself to other men. Can all three find happiness as well as success?

This movie was directed by Robert Z. Leonard. Busby Berkeley directed the musical numbers. It was produced by Pandro S. Berman. The production company was MGM. The screenplay was written by Marguerite Roberts and Sonya Levien from an original story by William Anthony McGuire. The new songs which were written for this movie were “Minnie from Trinidad” by Roger Edens, “Laugh? I Thought I’d Split My Sides” by Roger Edens, “Caribbean Love Song” by Roger Edens with lyrics by Ralph Freed, and “Ziegfeld Girls” by Roger Edens. The rest of the score consists of existing songs. 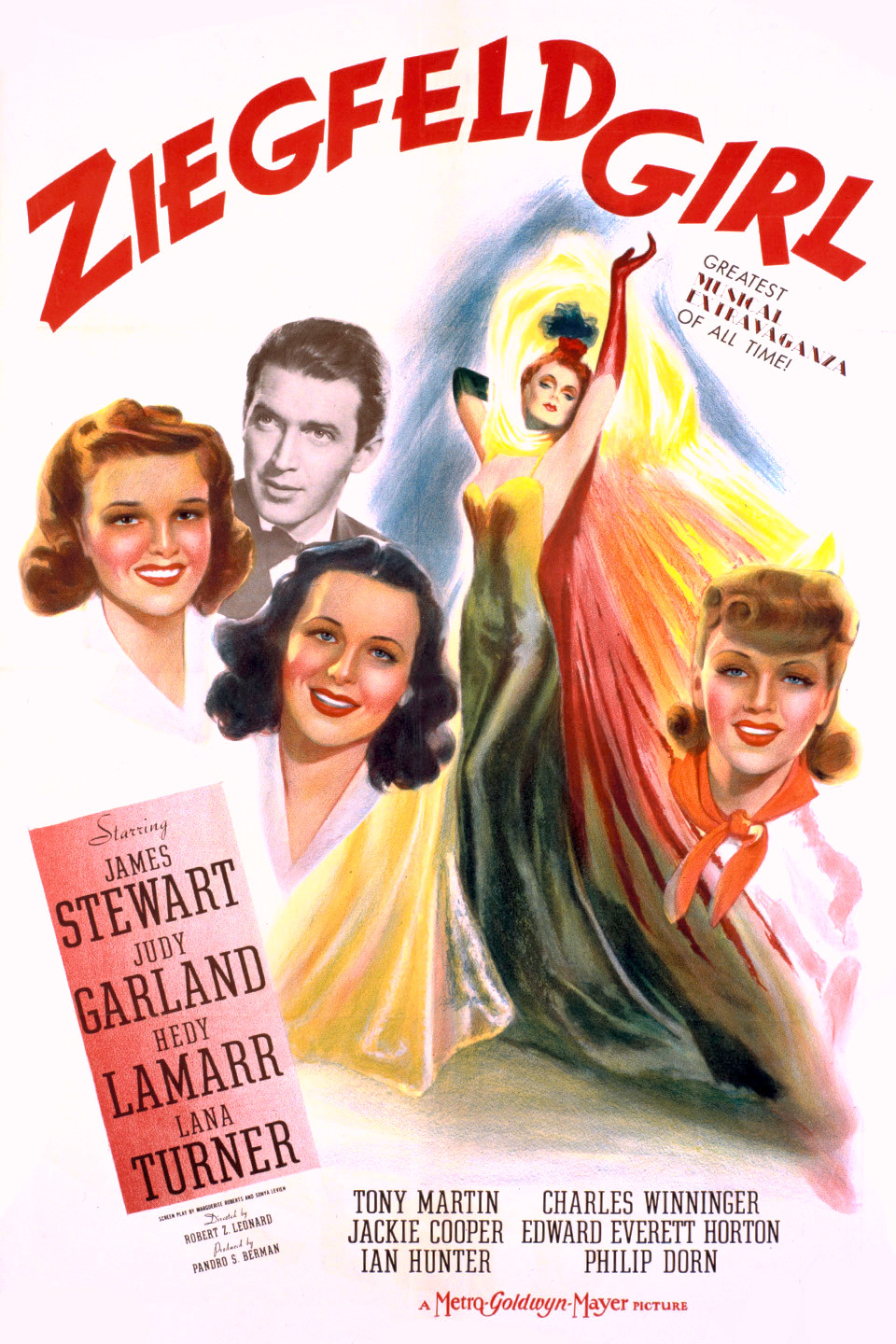 This is a fair Code film. Story-wise, it is very decent and Code-compliant. The danger of fame and success is shown while very wisely cautioning about the responsibility of the individual, since show business alone can’t be blamed for the bad choices of the people in it. I thought the situation with Sheila (Lana Turner) and Geoffrey Collis (Ian Hunter), her sugardaddy, was handled very well. The exact status of their relationship was depicted delicately. The same is true of the relationship between Sandra (Hedy Lamarr) and Frank (Tony Martin). After she separates from her husband, she sees Frank, the singer in the show, frequently. However, she figures that, since both are married, it is acceptable, since they are just friends. When she speaks with his wife (Rose Hobart), it becomes clear that they are not having an affair. The reason that I classify this film as fair is the costumes. Many of the costumes shown in the large Follies numbers are too “accurate” to those actually worn in the Ziegfeld Follies. Many of them are body-colored mesh with sequins over the chest. No actual cleavage is shown, and I don’t think any of the costumes are actually transparent. However, they are quite suggestive. Also, Sheila delivers a suggestive line in her first scene about a masher in the elevator who liked her ankles. She tells her friend that she replied to him, “How do you like your heels?” pantomiming a round motion. This is a reference to the expression “round-heeled woman,” which is slang for a woman of the oldest profession. Some of these things may be due to the fact that this film was made in 1941, the Non-Code Era. I wouldn’t classify this as a non-Code film, but it may be from that period.

I highly recommend this film. I found it very entertaining. The acting in this movie was excellent. In his last performance before joining the Army, James Stewart is very dramatic. He is a sympathetic character, yet he draws on the intense emotions and fiery temper which he showed in his earlier films, such as the ones in which he played villains. Lana Turner gives a great performance in this film. I have mainly seen her very young roles, such as the parts she played in 1938 and 1939. In this film, she impressed me with her dramatic and deep acting performance. Judy Garland is cute, talented, and sensitive as Susan Gallagher; her relationship with her father is touching. Hedy Lamarr is always lovely, but she is especially beautiful in this film. Unlike the other girls, she is not often shown in costumes which reveal her legs. She wears long, stately dresses which complement her gorgeous face and form. She is not just here for her appearance, though. She is deep and tragic in this role. Ian Hunter is a little different from his usual type of character in this film, but his presence in this role makes Geoffrey less of a cad than he would have been if played by someone like Adolphe Menjou. Tony Martin doesn’t do much in the acting department, but he adds a lot with his voice in many of the musical numbers. Charles Winninger is really cute as Susan’s father. Jackie Cooper plays the strong supporting part of Jerry Regan, Sheila’s brother and Susan’s tentative beau. He adds a lot to the story. The musical numbers in this film are wonderful. Judy Garland sings a very touching rendition of “I’m Always Chasing Rainbows,” and she is at the top of her vocal performance. She also shows her singing chops in a lively and impressive stage number, “Minnie from Trinidad.” One of my favorite numbers in the film was “Mr. Gallagher and Mr. Shean,” a vaudeville routine which Mr. Gallagher and his performing partner, Al (Al Shean), perform in the Ziegfeld Follies. It was a famous routine which Mr. Shean and his real-life vaudeville partner, Edward Gallagher, wrote in 1922 and performed in a few films. The two vaudeville legends didn’t do a lot of singing, but their banter was hilarious! The costumes and sets, as one would expect in such a film, were magnificent. Hedy Lamarr in a wreath of stars, the image used on the blogathon poster, is a classic image. All this was a backdrop to a story which was heartwarming as well as dramatic. This is a really wonderful film.

This article is my entry in The Great Ziegfeld Blogathon, hosted by Zoe Krainik of Hollywood Genes. Ziegfeld Girl is the second film in the trilogy of Ziegfeld films which MGM made. The first film was The Great Ziegfeld from 1936, which won an Academy Award for Best Picture. Although not even nominated for the performance, William Powell became acclaimed for his performance as Florenz Ziegfeld, Jr. He brought the great showman to life with such vivid energy that he reprised the role in a cameo-like appearance at the opening of Ziegfeld Follies in 1945. I saw the first film in 2018 when I was watching movies which won Best Picture Oscars, and I reviewed the second film last year as part of 52 Code Films. Now, I have seen all three movies. 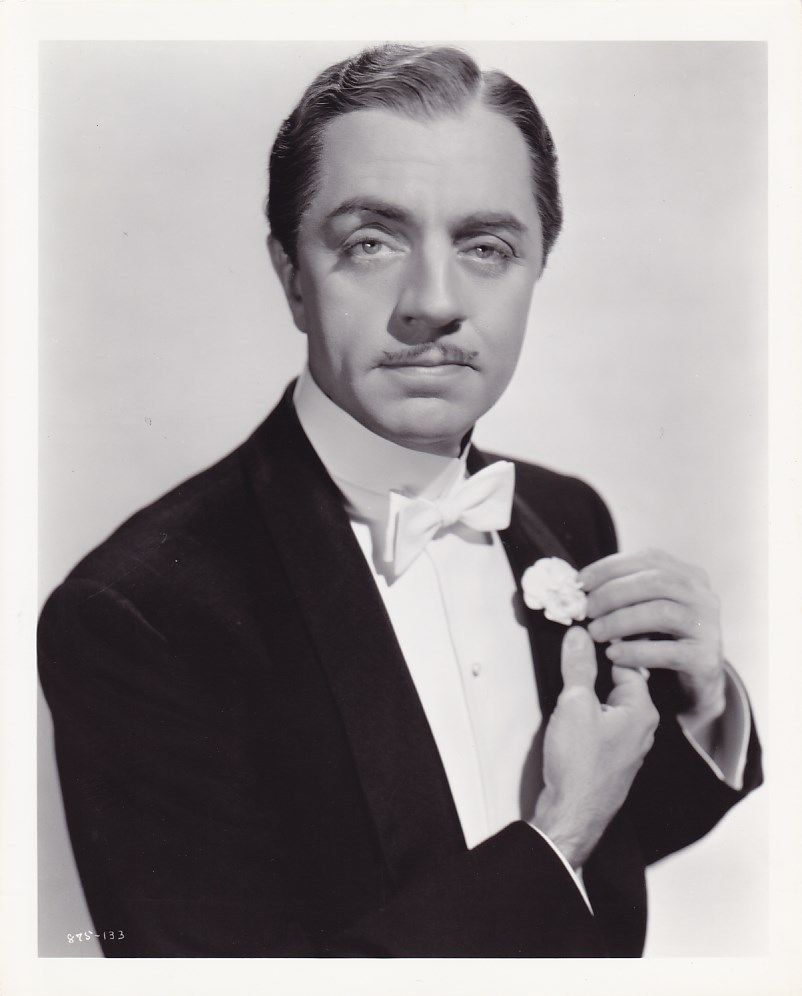 William Powell as The Great Ziegfeld.

Mr. Ziegfeld is a very important character in Ziegfeld Girl. After all, his name is in the title. However, he is never shown onscreen. Characters frequently discuss him and talk about seeing him, but the audience never sees him. Perhaps William Powell was not available to perform in this film, or perhaps the technique of not showing him was considered more dramatic. Anyway, I imagine that William Powell is Mr. Ziegfeld, and he certainly could be, since we never see anyone else in the role. Although Ziegfeld is unseen in this movie, his presence is strong throughout the whole story.