Today is Sunday, so it’s time for the second 100 New Code Films article of the week. Twice a week in all but four weeks this year, I intend to watch and review an American Breen Era (1934-1954) film which I have never seen before. This series gives me an opportunity to seek out and enjoy new Code films. It also gives me an outlet for writing articles which can qualify as blogathon entries, as well. This article is one such entry which also is part of a blogathon. 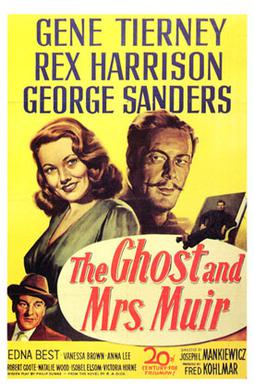 Today’s topic is The Ghost and Mrs. Muir from 1947. I have wanted to see this film for a few years, but I never had the right opportunity. I heard about The Love Goes On Blogathon a few weeks ago, but I didn’t join it until the beginning of this week. The theme of this blogathon is movies about love which transcends death. When I tried to think of movies which might fit in this category, The Ghost and Mrs. Muir came to my mind. I decided that a movie about a woman who is in love with a ghost is surely about love that lasts beyond the grave. We bought this movie on Amazon Prime Video and watched it on Thursday. 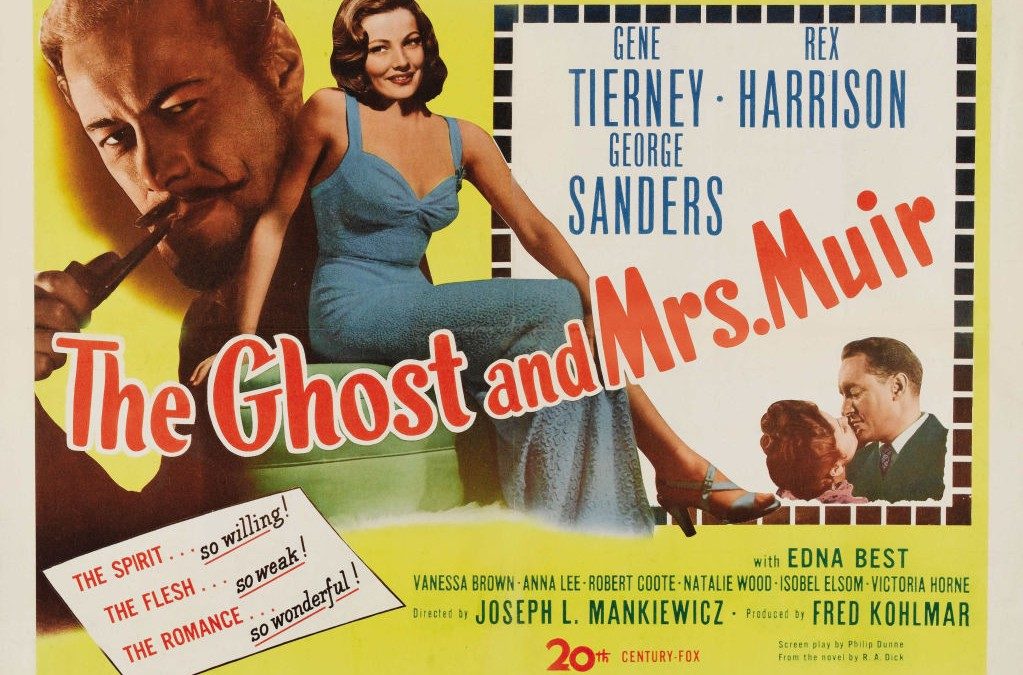 A beautiful young widow and her daughter leave her mother-in-law and sister-in-law’s dwelling to rent a lovely little cottage by the sea. Despite the realtor’s insistence that the house wouldn’t suit the young lady because it is haunted, she insists that it is nonsense, since she loves the house. However, on the first evening there, she meets the astonishingly real ghost of the sea captain who lived in the house before dying of an untimely accident four years earlier. She earns his trust by showing him that she isn’t frightened of him, so he agrees to let her stay in his house. He helps her remain financially independent by dictating a book of his nautical adventures to her, but a flirtatious children’s author whom she meets in London threatens their growing but impossible love. 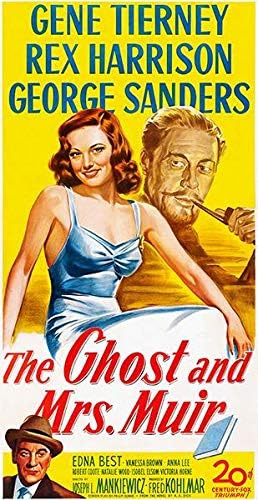 This movie was directed by Fred Kohlmar. It was produced by Joseph L. Mankiewicz. The production company is 20th Century Fox. The screenplay was written by Philip Dunne. It came from the 1945 novel of the same name by R. A. Dick. It was nominated for an Academy Award for Best Black-and-White Cinematography for Charles Lang.

This is a good Code film. This movie is an excellent example of a film which is simultaneously mature and youthful. It has a playful quality, yet there are serious themes involved. I truly appreciated the way the relationship between the dashing and romantic but deceased Capt. Daniel Gregg (Rex Harrison) and the beautiful but proper Lucy Muir (Gene Tierney). When Lucy realizes that the captain’s ghost intends to haunt the room where she will be living, she makes her concern about the impropriety of the situation clear. He plainly reminds her that there is no possibility for immorality, since he has been nothing but a spirit for four years. However, a few instances of uninvited visits and one compliment about Lucy’s figure make it clear that he is a spirit who is still capable of worldly observation. The attraction which the confident captain has for the lovely young widow is undeniable, but it is never anything but proper. I especially appreciate the delicacy which was used regarding “salty” sailor language. Lucy refers to Captain Gregg’s “salty language,” even accusing him of swearing at one point. However, the extent of this objectionable language is frequent usage of the word blasted, an “expletive” which Lucy quickly picked up from him, and an occasional interjection of confounded. In one scene when Lucy is typing a page in the spectral captain’s memoirs, she refuses to type a certain word, objecting to the language. We never are given a clue as to what word it is, since Lucy insists that she never even discusses whatever it is the word is describing, but we clearly hear her stubborn typing of four individual letters. This is the sort of delicacy which the Code created. It is my fondest wish for our society that we may again see the day when one film character will remonstrate another for using the profanity blasted.

I highly recommend this film. It is absolutely riveting. From the first moment that Bernard Herrmann’s dramatic score could be heard behind the 20th Century Fox searchlights, this movie was captivating. The acting was brilliant. This film was only about an hour and a half long, yet I thought the story was magnificently deep because of the way the characters were brought to life. Although he was always completely opaque, there was something definitely otherworldly about Mr. Harrison’s embodiment (or disembodiment) of this character. I have only seen Rex Harrison in one other film, My Fair Lady from 1964, and I intensely dislike him, or rather his character, in that movie. However, this performance has won me over for him. He was so much more charming in this film. I thought he was perfect as the tough but curiously sensitive captain. Gene Tierney was magnificent as Mrs. Muir. She is always lovely, but she was more beautiful than I have seen her in any other movie in this film. The period costumes made her exceptionally stunning, yet that was just a backdrop to her brilliant performance. She was sweet and tender while being determined and principled as a young widow who refuses to be controlled by her in-laws or bullied by a ghost. I couldn’t help loving her. George Sanders was a perfect rat as Miles Fairley, the Englishman who is just a little too persistent in his courtship of Lucy. The rest of the cast was excellent, as well, including Edna Best as the ever-faithful maid, Natalie Wood as the darling little girl, and Robert Coote as the comical and cowardly realtor. Composer Bernard Herrmann felt that this was his best score, and it certainly added a lot to this movie. The dramatic music accompanied the crashing ocean waves to subtly yet impactingly show the passage of time. In fact, sometimes his music was a little more dramatic than the film itself, or at least more suspenseful. There were a few instances when the music was more ghostly than the cinematography, but it added a bit of extra mystery. I truly loved this film.

This weekend, Steve of Movie Movie Blog Blog II is hosting The Love Goes On Blogathon. This blogathon is dedicated to his wife, who died in March. May she rest in peace. I sincerely commend Steve for his resilient spirit in proceeding so bravely by hosting this wonderful blogathon to honor stories about the deathless qualities of love.

There are many stories about love which lasts after one person dies, but few stories began after one of the sweethearts has already left the mortal realm. This is the ultimate Love After-Death tale as well as the ultimate Phantom tale. As such, it has the bittersweet quality of making us ponder “what might have been,” as the characters do. When they are writing the book, Daniel mentions an incident which occurred when he was sixteen years old. Lucy wistfully says that she wishes she could have known him then. That is the only concrete line which expresses her desire that their paths had crossed when he was alive, but their feelings are perfectly clear without plain expressions. Daniel never tells his beloved Lucia how he really feels about her. He doesn’t clasp her hand or kiss her as he leans over to whisper in her ear, since he is just a spirit. However, the look in his eyes expresses it all. These characters don’t have very many scenes together, but the scenes which they do have allow enough time for their relationship to develop. It is so beautiful, so romantic, and yet so tragic because it is hopeless for them to share their lives on earth. This movie left me with a wonderful, dreamy feeling. I dedicate this review to all “phans,” who love the wonderful romance of a love which is more star-crossed than Romeo and Juliet’s. Here it is a tale of a love which spans the graves, beautifully brought to life with Code delicacy.