Today is Thursday, so I often use this day to publish a Code Concepts article instead of a Breening Thursday article. A lot can be learned about the process of self-regulation from breening un-Code films, but there are many things which you can only learn about the Breen Era by studying Code films. I try to illustrate examples of Code standards in my new Code film articles as I come upon them, but it is good to study individual concepts. That is the purpose of this series. I illustrate and explain different rules, standards, and goals which were important to the PCA, describe the reasons behind them, and give examples of films which follow or break these rules. I hope to use this series to create a better understanding of the American Breen Era (1934-1954) for my readers.

The Rating System only warns about “language” but does nothing about it.

Pointed profanity (this includes the words, God, Lord, Jesus, Christ – unless used reverently – Hell, S.O.B., damn, Gawd), or every other profane or vulgar expression however used, is forbidden.

Although the authors of the Code did not mention every swear word known to man, this section leaves little doubt that profanity is forbidden. Section IV. clarifies the ban on unacceptable speech further.

Obscenity in word, gesture, reference, song, joke, or by suggestion (even when likely to be understood only by part of the audience) is forbidden.

The part of the section which is in parentheses is very important. Unlike the Rating System, which allows movies with subtle obscenity and suggestiveness to get lighter ratings, the Code forbade even obscenity which probably wouldn’t be understood by children. If films continually contain such “hidden” obscenity, it won’t be long until everyone in the audience fully understands it.

There are a few noteworthy exceptions, when “Shurlock Era profanity” was allowed. (“Shurlock Era profanity” is what I call the usage of the words hell and damn, since they became common during the Shurlock Era, although most other profane words were still forbidden). The most famous ones are Rhett Butler’s (Clark Gable) exit line in Gone with the Wind (1939), Tom Joad’s (Henry Fonda) muttered swearing at his mother in The Grapes of Wrath (1940), and Terry Molloy’s (Marlon Brando) cursing of Father Barry in On the Waterfront (1954).

Terry Molloy (Marlon Brando) was given rare permission to utter profanity in On the Waterfront.

All these instances were rare exceptions, not oversights. Special permission from the New York office of the MPPDA, later the MPAA, was given. I discussed the first exception at length in my in-depth review of Gone With the Wind, which was eventually allowed because of the popularity of the novel. As I mentioned in my review of The Grapes of Wrath, the four-letter word used in that film is hardly pointed profanity, since Tom mutters it so quietly and quickly that it is easily missed. As for the swearing in On the Waterfront, I only know what I have read about it, since I haven’t seen the film. According to information in Thomas Doherty’s biography of Joseph Breen, Hollywood’s Censor, the PCA felt that this usage was acceptable “for plot or proper characterization,” since it showed how irreligious Terry is at that point in the film. All these cases are rare exceptions to a rule which was law at that time. I can only think of two other such exceptions from the whole Breen Era, The Man without a Country (1937) and Life with Father (1947). Five films out of approximately eight thousand is a good record!

After Frank Butler was allowed to say, “I don’t give a -,” and receive a PCA Seal of Approval, an addition was made to the Profanity section of the Code.

No approval by the Production Code Administration shall be given to the use of words and phrases in motion pictures including, but not limited to, the following:

Alley cat (applied to a woman)… damn; hell (excepting when the use of said last two words shall be essential and required for portrayal, in proper historical context, of any scene or dialogue based upon historical fact or folklore, or for the presentation in proper literary context of a Biblical, or other religious quotation, or a quotation from a literary work provided that no such use shall he permitted which is intrinsically objectionable or offends good taste).

Thus, the usages mentioned were not Code violations but very special exceptions which were granted with extreme rareness. More frequently, words like damnation were used in a religious sense, and hell could be used when meaning the opposite of heaven. The main ban was on using these words flippantly or merely for a “punch.” 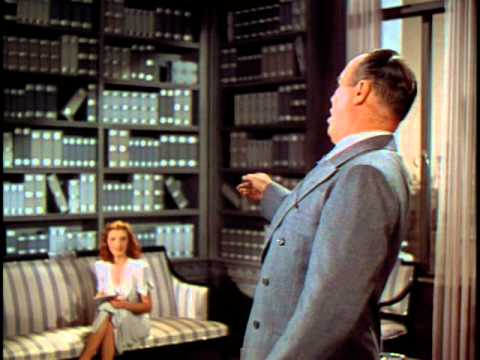 Emory Parnell plays a lawyer dictating a letter with implied profanity in the opening “Apologia” of Louisiana Purchase.

When filmmakers are forbidden to use pointed profanity, they often revert to using implied profanity, plays on words, and rhyme schemes which suggest forbidden words. A good example of this is in Louisiana Purchase (1941), the non-Code film which I recently reviewed as one of my 100 New Code Films. In the opening “Apologia,” the lawyer sings, “And anyone can tell, / They’re going to be sore as… Well, you won’t get away with it.” In a good Code film, the lyric about Louisianians being “sore as…” would have been replaced with something else, like “That things will not go well.” In the original play, the four-letter word was plainly stated. However, although it is unspoken in the film, the rhyme makes it obvious. 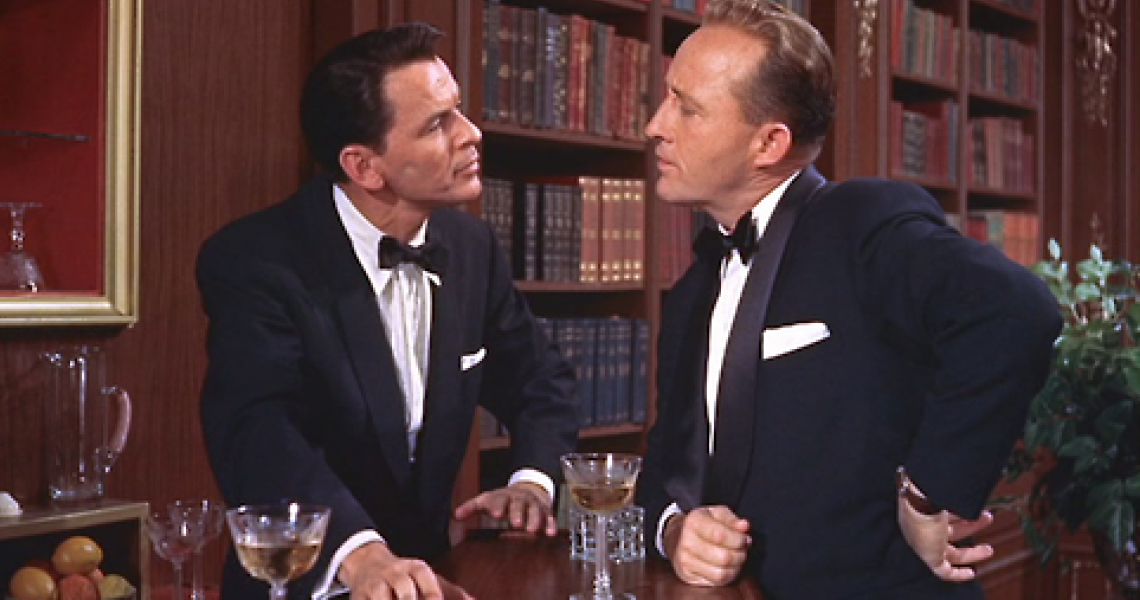 Mike Connor (Frank Sinatra) sings implied profanity when he and Bing Crosby sing their only film duet in High Society.

Such lyric tricks and mental suggestions were very common in Pre-Code and Shurlock Era films. As content restrictions loosened, they became less common, since it was fine to plainly state things. However, even now it is popular to narrowly avoid saying a swear word, often substituting it with a similar sounding word. One finds this form of suggested profanity on tee shirts and decorative plaques for home decor today. One example of a Shurlock Era usage of this technique is in High Society (1956) during “Well, Did You Evah?” The drunken Mike Connor (Frank Sinatra) sings about Mimsy Starr, who “got pinched in the As-tor bar.” The slight pause in the middle of Astor gives one a moment to think that the word ends after the first syllable, which has a very different meaning.

With pointed profanity banned in all but the most special cases and implied profanity strongly discouraged, what were screenwriters to do? One can’t forbid writers from using any kind of exclamations or annoyed language. Thus, acceptable substitutes had to be found for actual profanity. 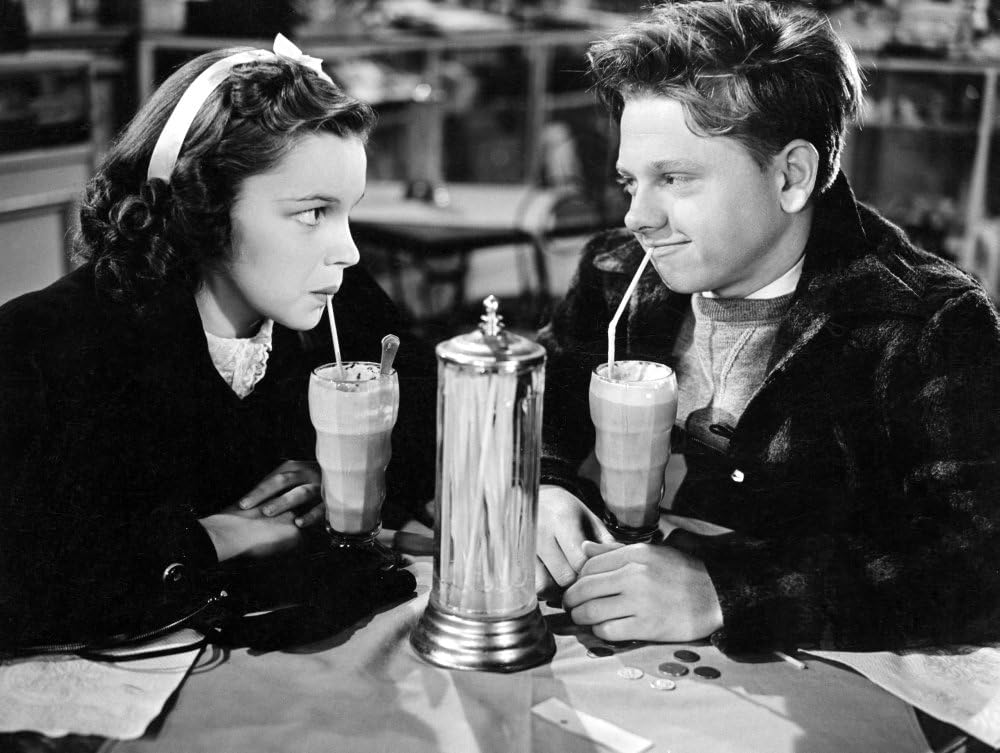 Words like heck and darn are always fine alternatives to Shurlock Era profanity. Doggone is a useful expression, as well. When used irreverently, gosh, goodness, and heaven(s) are good alternatives to God and Lord. Gee is an acceptable expression, as are its derivatives gee whiz and gee willikers, but Jeez sounds too much like Jesus, which must only be used reverently. 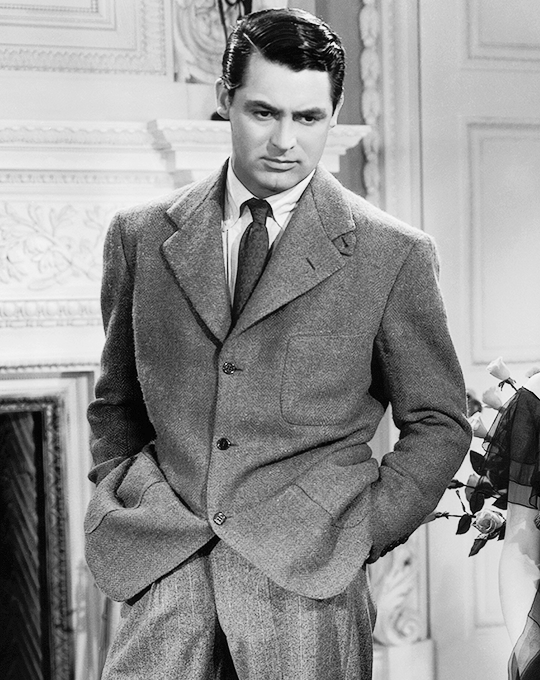 Full expressions used in Code films in place of profane expressions are both interesting and creative alternatives to the more common substitutes listed above. One often hears actors in Code films angrily exclaim “Hang it!” or say that they don’t “give a hang” about something. In cases when characters are being rather rude, they can tell someone to “go hang himself,” which is similar to expressions like “jump off a bridge,” “go jump in a lake,” and “go take a flying jump.” 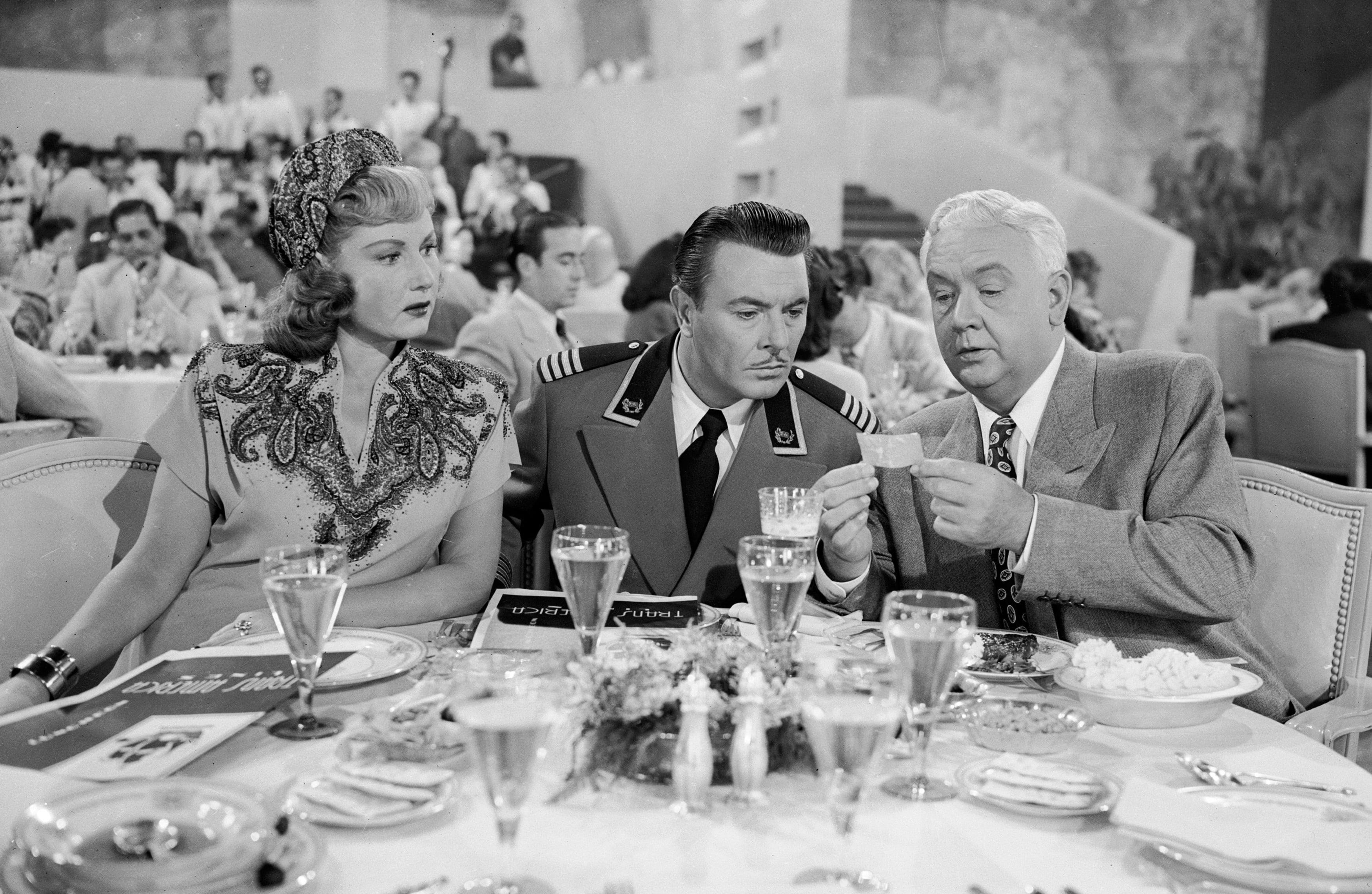 One sometimes hears Code dialogue include references to “telling someone where to go.” For example, in Luxury Liner (1948), Zita Romanka (Marina Koshetz) tells fellow opera singer Olaf Eriksen (Lauritz Melchior), “I would enjoy very much telling you where to go.” (This is in response to his remark that the busy captain is always going someplace.” He replies, “I have been there.” Isn’t this implied profanity, which I mentioned before as Code violating? 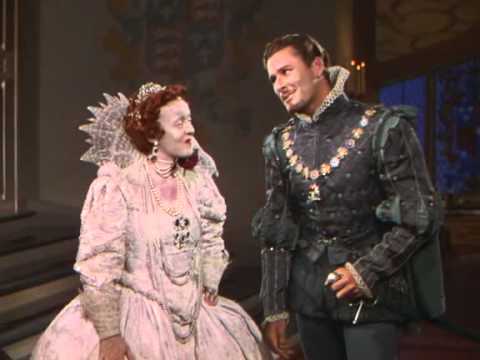 In The Private Lives of Elizabeth and Essex (1939), Queen Elizabeth (Bette Davis) frequently tells her beloved but infuriating paramour, Essex (Errol Flynn), to “go to the devil.”

Such subtle instances of “telling someone where to go” are not necessarily Code violations, since hell is not necessarily the unnamed place. “Go to blazes” and “Go to the devil” are acceptable alternatives to the common curse which are acceptably used in many Code films. Although these are rude things to say, they are fitting alternatives to the expression which uses a swear word.

Due to clever editing, the audience, unlike Janet Leigh, needn’t be shocked by Guffy McGovern’s (Paul Douglas) swearing.

Of course, my favorite avoidance of including profanity in a Code film is in Angels in the Outfield (1949). An important element of gruff Guffy McGovern’s (Paul Douglas) character at the beginning of the film is his foul mouth. Thus, we see the baseball coach’s reformation after an angel visits him and tells him to clean up his act. However, this being a Code film, actual profanity couldn’t be included in a Code film. How, then, could the point be made? The clever technique used is multiple layers of yelling whenever Guffy swears, reducing his words to incoherent gibberish. The audience can’t pick out any words he is saying, but the other characters’ reactions make it clear that he is swearing heavily. This is just genius, since it furthers the plot while preserving the film’s innocence!

Observance to details was what made the Code successful. Forbidding extreme profanity isn’t enough. To truly cleanse the film industry and American culture of profanity, vulgar language, and offensive speech, this unacceptable language had to be rooted out at its core, which is implied swearing. In its place, dialogue gave examples of acceptable, non-profane substitutes. In the lack of such ethics and cautiousness, swearing has become so common that the average middle-school student’s language would shock a 1940s sailor! Current culture is appallingly tolerant and inclusive of profanity, and this stems from its commonness in films. The only refuge from this polluted dialogue is Breen Era films!