Today is Sunday, so it’s time for this week’s second 100 New Code Films article. If one wants to be a truly knowledgeable classic film fan, he must seek old movies he hasn’t seen yet relentlessly. My goal is to watch every Code film ever made in my lifetime. That is a narrower time period than the Golden Era of Hollywood at large, since Code films are only those made in America during the Breen Era (1934-1954). However, that still is a huge undertaking, since approximately 8000 new movies were released in America during those twenty years. I am chiseling down the amount of unseen Code films by vowing to watch and review 100 new Code films this year.

Today’s topic is Louisiana Purchase from 1941. On Wednesday, I looked through our collection of VHS movies to find a new Code film to watch. I selected Louisiana Purchase because I wanted to watch a lighthearted film rather than a drama, and this story looked interesting. Thus, we watched it.

It has been discovered that Louisiana government is overrun with graft, essentially involving a crooked business called the Louisiana Purchasing Company. When the crooks in charge of this racket learn that an honest senator is being sent to investigate the graft, they pin the whole thing on an underling who knows nothing of the dishonesty. Desperate to avoid jail, the scapegoat enlists the aid of a glamorous restaurateur and her lovely niece just over from Europe. The young lady agrees to help embroil the stuffy senator in a scandal, but the plan backfires when she refuses to blackmail the nice older gentleman. 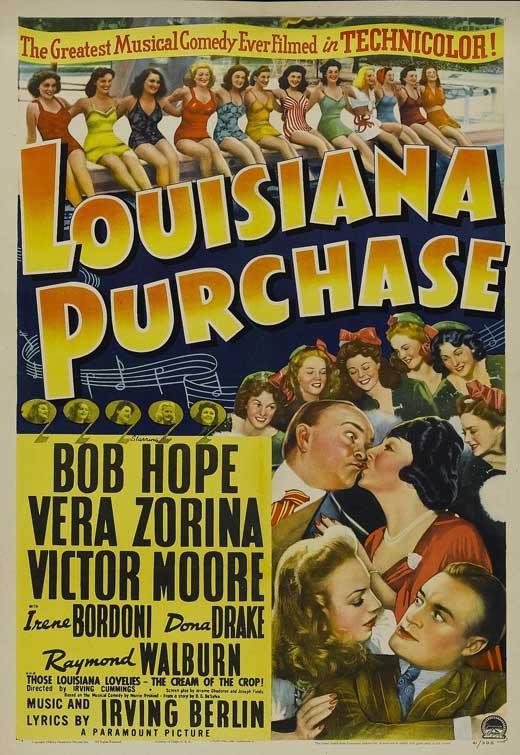 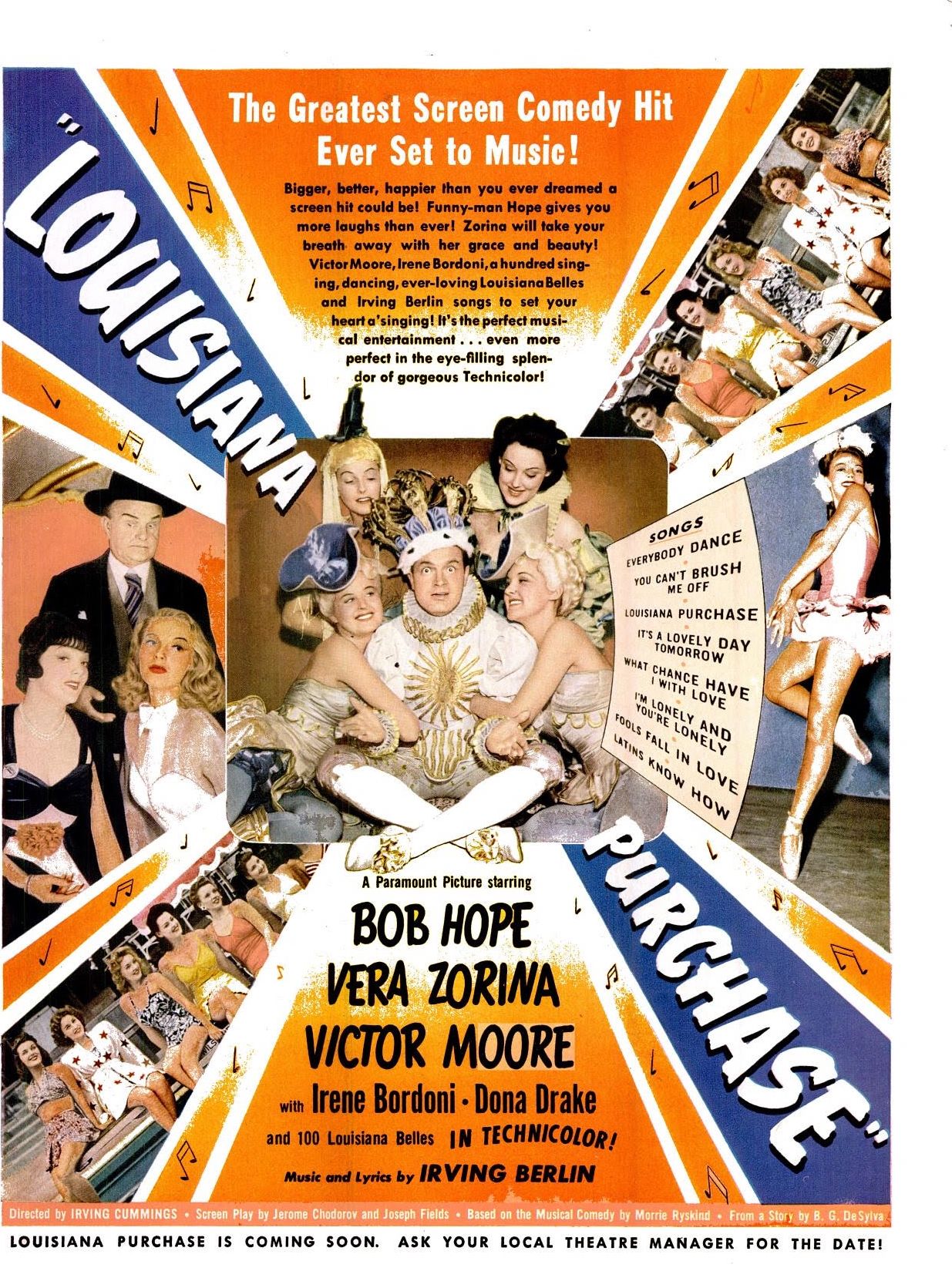 This movie was directed by Irving Cummings. It was produced by Harold Wilson. The production company was Paramount Pictures. It comes from the popular 1940 Broadway musical of the same name by Morrie Ryskind. It was based on a short story by Buddy G. DeSylva. The screenplay was written by Jerome Chodorov and Joseph Fields. All the music in this film, sung or instrumental, is by Irving Berlin, who wrote the words and music to the play’s score. This movie was nominated for Academy Awards for Best Color Cinematography for Harry Hallenberger and Ray Rennahan and Best Art Direction – Color Interior Decoration for Raoul Pene Du Bois and Stephen Seymour. This is a non-Code film. This is the first time I have reviewed a non-Code film as part of either this new Code film series or last year’s, 52 Code Films. As I explained in my descriptive article about Code film classification, non-Code is the least Codish classification of all five categories. Basically, non-Code films are movies made during the Breen Era which contain enough Code violations to not seem like Code movies at all. They usually resulted from self-regulation by a PCA member other than Joseph Breen. There were breaches in Code compliance while the Production Code reigned supreme, so there is a small chance of any Breen Era movie’s being non-Code. However, there is a much greater chance for movies released in 1941 and 1942, since this was the Non-Code Era. From April of 1941 to April of 1942, Joseph Breen was absent from the PCA while working at RKO Radio Pictures. In his absence, Geoffrey Shurlock was his unofficial replacement as chief Code-enforcer. Under his weak direction, the quality of films quickly slid, resulting in a large amount of non-Code films. Having been released on December 31, 1941, this film is obviously from the Non-Code Era. Thus, the Code violations, although still surprising, are understandable.

This movie contains numerous surface problems as well as serious core ones. For the surface, it contains some risque costumes, including a dress with a zipper down the front, multiple suggestive jokes, and inappropriate dialogue. The characterization of Madame Yvonne Bordelaise (Irene Bordoni) was too much like that of a “madam” of a house of ill-repute, although she supposedly ran a restaurant. Jim Taylor (Bob Hope) even referred to her as “the madam” once. The scheme of embroiling the senator (Victor Moore) in a scandal with some woman was very suggestive when planned, although it ended up involving nothing more than a picture of Marina (Vera Zorina) sitting on his lap in a restaurant. After the picture scheme fails, several of the graft-mongers scheme to blackmail the senator with a more serious scandal, so he ends up having three uninvited women in his bedroom in the middle of the night! This scene is very suggestive. When someone bursts into the room to break the scandal, he produces a woman’s brassiere from the bathroom. To show such an intimate garment of female apparel is always unacceptable. Later, Bob Hope demonstrates the way women get into girdles with excessive detail.

As if these mere surface problems aren’t bad enough, this film is extremely political. The political commentary is farcical but hardly thinly referenced. Wikipedia explains that this film satirizes a Depression relief program in Louisiana which some called the second Louisiana Purchase. The title is an obvious reference to this. This movie is extremely anti-Democrat and anti-Roosevelt. Not everyone had to be a supporter of President Roosevelt under the Code, but it is against the Code to openly belittle the President of the United States and his political party. Many of the Republican senator’s remarks were very defamatory, such as references to the old days “when it was legal for a Republican to be president.” The most shocking line, politically, was said by Marina after she stated her plan to become an American citizen so that she could go on relief. “Heil Roosevelt!” True, Heil is just a German word for hail, but this is an obvious reference to the Nazi salute “Heil Hitler!” Many people didn’t agree with President Franklin D. Roosevelt’s politics and handling of the Depression. Even Joseph Breen, who entertained President and Mrs. Roosevelt at his home, was a Democrat who became a Republican because of FDR. However, he was a devoted American, and he knew that is very unpatriotic, even treasonous, to defame the President, even if you don’t personally like him. Subtly comparing him to Hitler is ridiculous! Stating in the opening number that the whole thing is just a fictional joke doesn’t make it better. In fact, I think it makes it worse, since they make a huge point of singing about the setting being a fictional state, Louisiana! Maybe that appeased Geoffrey Shurlock, but I’m sure it didn’t evade audiences down South. 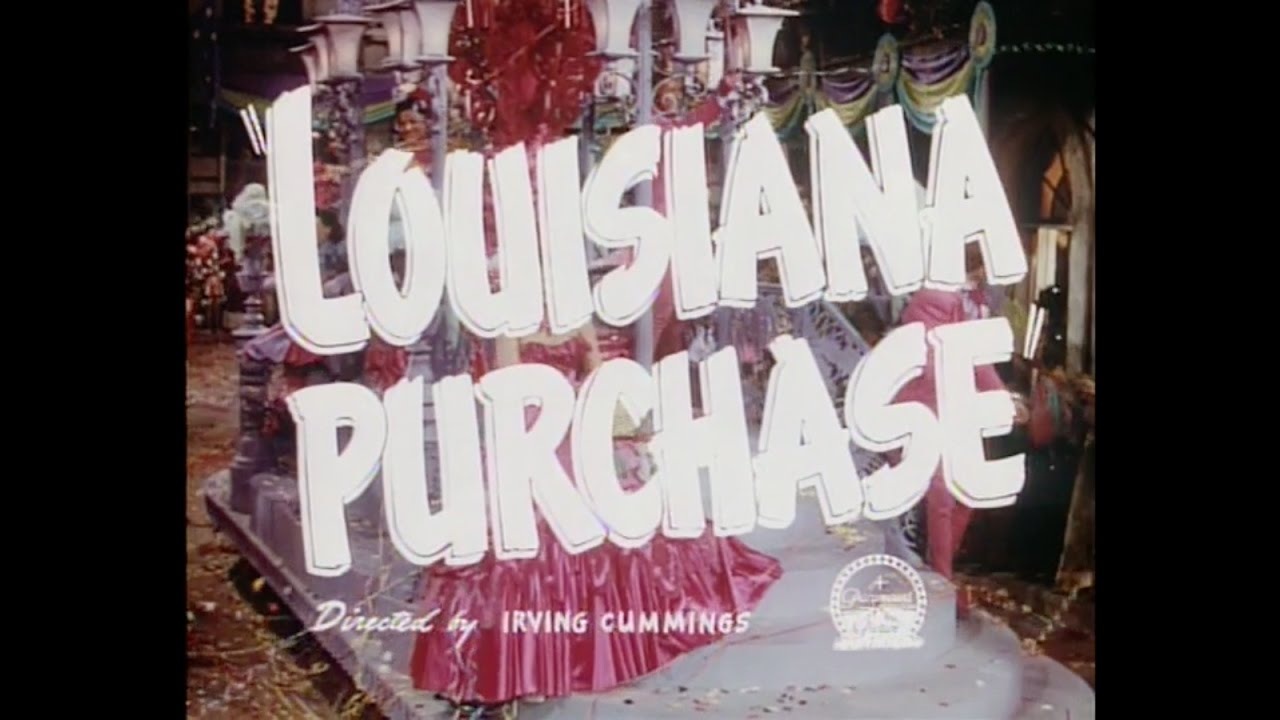 I do not recommend this film. This is the first movie this year which I haven’t recommended. Honestly, unless you are determined to watch every Bob Hope movie or like me want to watch every Code film, I would say that it’s only real value is as an example of the Non-Code Era. Some movies are entertaining even if they aren’t very good Code films. However, this movie’s faults go far beyond Code violations. It was cute at times, but many of the jokes just weren’t funny. Also, it was really lacking good musical numbers. The opening “Apologia” was funny at the time, but it wasn’t as amusing when it fit into the whole smart aleck political message. The rest of the songs were quite unmemorable. Many of the songs from the stage show were cut because of their tawdry content. No additional songs were added, so the remaining score is dull and uninspired. The color cinematography was quite attractive. The costumes were very colorful, and many of the Mardi Gras costumes were very lovely. Unfortunately, it is just a pretty surface to a rather shallow pool. I have found that non-Code films tend to be very goofy and extremely shallow, often with inferior performances from their talented leads. This movie is no exception. Bob Hope was far from his best in a role which I would not call very likable. Leading lady Vera Zorina was a professional ballet dancer who probably felt more comfortable in this part on the stage than on a film set. The same applies to Irene Bordoni, who also appeared in the original musical on stage. Victor Moore was the only character whom I found really amusing, since he did a great job of being a befuddled, stuffy, but lovable senator who doesn’t really know what’s going on. Other than that, it was very weak. I don’t have any personal criticism of these ladies’ performances, nor of Mr. Hope’s. I simply don’t think they were given very good material. The script was very weak. The only substance came from obnoxious political commentary, and the jokes were supplied by risqueity and double intendres. The actors did their best, muddling along in this situation, but the basis of the film was cheap laughs from tawdry humor, leaving the performers little time to show subtlety and true talent. When filmmakers are allowed to round out a film with questionable content, they rarely take the trouble to add depth and finesse to a film. In short, this is the 1941 equivalent of the substanceless “romcoms” which are being produced today! Thank goodness Mr. Breen came back to the PCA in 1942. If he hadn’t, 1940s movies would have been racy escapades and platforms for political agendas rather than wholesome entertainment.