Today is Sunday, so it’s time for another new Code film. In all but four weeks of 2020, I am going to watch and review two American Breen Era (1934-1954) movies which I have never seen before as part of my series 100 New Code Films. This is a great opportunity for me to discover a lot of wonderful movies I have yet to see. I hope you will come along with me throughout the year during this series so that we can discover these movies together!

Today’s topic is 100 Men and a Girl from 1937. I heard of this film when looking over the films which Deanna Durbin made. I was interested in this film, especially after I realized that Deanna sang the famous Hollywood soprano aria “A Heart That’s Free.” I looked this movie up on Roku on Wednesday to see if it was available, and I realized that it was offered for free on one of the featured channels. A Philadelphia trombonist is out of work but is unable to get a job with the Philadelphia Orchestra. When he finds a purse on the street, his adolescent daughter thinks that he has gotten a job. She soon finds out that he unintentionally deceived her, so she brings the purse and the remaining money back to the wealthy woman who lost it. The frivolous socialite agrees with the young singer that it’s terrible that musicians lack jobs and promises to be a sponsor to her orchestra of unemployed musicians. The young girl must get 100 unemployed musicians, a sponsor, and a famous conductor to make the unemployed orchestra a success. 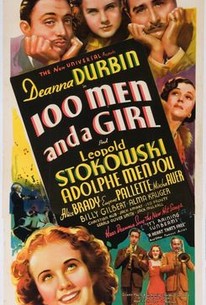 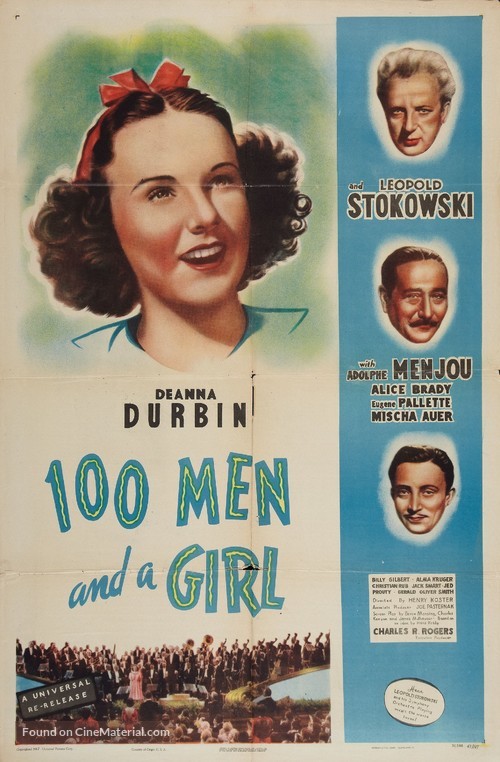 This movie was directed by Henry Koster. The associate producer was Joe Pasternak, and the executive producer was Charles R. Rogers. The production company was Universal Pictures. The original screenplay was written by Bruce Manning, Charles Kenyon, and James Mulhauser. It was based on an idea by Hanns Kraly. This movie won an Academy Award for Best Score for Charles Previn (head of department). It was nominated for Best Picture, Best Original Story for Hanns Kraly, Best Sound Recording for Homer G. Tasker, and Best Film Editing for Bernard W. Burton. The only new music is a song Deanna Durbin sings, “It’s Raining Sunbeams” by Frederick Hollander with lyrics by Sam Coslow. She also sings “A Heart That’s Free” by Alfred G. Robyn and Thomas Railey, “Alleluja” by Wolfgang Amadeus Mozart, and “The Drinking Song” from La Traviata by Giuseppe Verdi. The rest of the music is classic music which the orchestras play.

This is a good Code film. It is wholesome, decent, clean, and fun. There are no Code violations whatsoever. It is nothing but acceptable for everyone. Movies like this are examples of the lighthearted and fun-loving movies which lifted spirits during the Great Depression. This movie can lift your spirits any time, since it doesn’t include anything which is unacceptable.

I highly recommend this movie. Deanna Durbin gives a lovely performance in it. She is more than just cute. She gives a very dynamic performance as a girl who is more concerned with getting a job for her father and their unemployed musician friends than singing herself. Adolphe Menjou is very touching as her father. I think that this is the first time I have seen Mr. Menjou as a down-on-his-luck fellow, since he usually is the wealthy man. He is very convincing as the out of work musician; he is also lovable as a widowed father. Mischa Auer, Eugene Palette, and many other familiar faces form the strong, humorous, and endearing supporting cast. Leopold Stokowski, the great guest conductor of the Philadelphia Orchestra, is billed as the second lead of this film. Although he was a musician, he is a very talented actor when playing himself but interacting with fictional characters. It is wonderful to see his intense conducting style sans a baton. He also dramatically plays Bach’s “Toccata and Fugue” on the piano in one scene.

I truly appreciate the classical music which Joe Pasternak brought to the screen with the movies he produced first at Universal and then at MGM. Because of his appreciation for classical music, he is my favorite producer. Leopold Stokowski joins musical giants like Jose Iturbi, Lauritz Melchior, and Mario Lanza as classical musicians whom Mr. Pasternak featured in his films. In addition, he cultivated young operatic soprani Deanna Durbin, Kathryn Grayson, and Jane Powell, who often sang arias in their films. Add to that the fact that he often featured Xavier Cugat’s band as well as other popular musical groups like Tommy Dorsey and the Pied Pipers, and you realize what a musical contribution Joe Pasternak made to Hollywood. In addition, he was such a good friend of Joseph Breen that he was one of his pallbearers at the latter’s funeral.

This is a very enjoyable film. It isn’t just fluff, though. It deals with serious topics like unemployment during the Depression and the need for jobs for artists such as musicians. Not everything goes smoothly for our heroine, and it takes more than a song and a smile to solve her problems. However, there is something very noteworthy in this film. This movie deals with a major problem of the Great Depression, unemployment. However, the word depression is never mentioned, and the widespread unemployment which was in America at this time is not discussed. It was a difficult time and a topic which everyone was tired of hearing addressed. It was very political, and many people were very bitter about it. Thus, Code films often included elements of the Depression Era without addressing the hardship itself, which kept films from being too much like the dismal reality which plagued our country for over ten years. Instead of talking about the problem, this beautiful movie shows a young girl who will stop at nothing to achieve a solution. We need more of that spirit today, and we can only get it if Hollywood starts making movies which glorifies such courageous youths.