Today is Tuesday, and I am going to share my first 100 New Code Films article of the week. I usually wait until Saturday to write about my first new Code film of the week, but I am publishing earlier this week because today is the last day of a blogathon in which I want to participate. This series is a great opportunity for me to watch and review movies I have been wanting to see while also participating in blogathons. That way, I have a specific reason for watching certain films, and I can support my friends’ celebrations of classic actors or aspects of filmmaking. 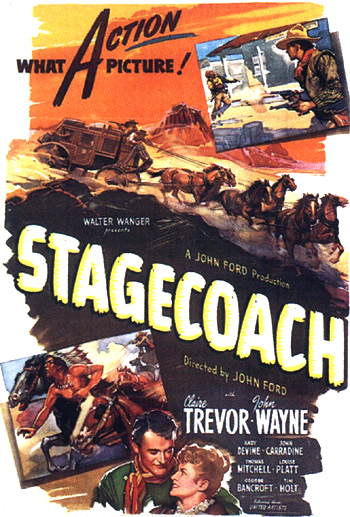 Today’s topic is Stagecoach from 1939. I learned about this film in December when I was writing an article about the top films of 1939 for The Epoch Times, 1939-2019: 80 Years After Hollywood’s Golden Year. I realized that I had seen five of the ten blockbusters nominated for Best Picture that year. Although only one of the five I hadn’t seen made it onto the list of Academy Award-winning films I want to watch this year (Goodbye, Mr. Chips), I made note of the others films and hoped to get a chance to see them. The 110 Years of Claire Trevor Blogathon gave me that opportunity, since Miss Trevor is the leading lady of Stagecoach. This film is free on Amazon Prime Video, so I watched it earlier today.

A stagecoach leaves in the Old West of Texas and must get through wild lands filled with Apaches on the war path, often with no more protection than the comical driver and the marshal who is riding shotgun. The passengers include a lady of questionable reputation with a big heart, a rancher who escaped from jail after seeking revenge on his family’s murderers, a Southern gambler, an alcoholic doctor, a proud but sickly soldier’s wife, a timid whiskey drummer, and an embezzling banker. During their journey, hearts grow closer, especially those of the rancher and the misunderstood young woman.

This movie was directed and produced by John Ford. It was presented by Walter Wanger Productions and released thru United Artists. The screenplay was written by Dudley Nichols from an original story by Ernest Haycox. This film was nominated  for Academy Awards for Best Picture, Best Director for John Ford, Best Black-and-White Cinematography for Bert Glennon, Best Art Direction for Alexander Toluboff, and Best Film Editing for Otho Lovering and Dorothy Spencer. It won two Oscars, Best Supporting Actor for Thomas Mitchell and Best Scoring for Richard Hageman, W. Franke Harling, John Leipold, and Leo Shuken.

This is a perfect Code film. Westerns can be very violent films, since they center on outlaws, shootouts, stagecoach attacks, and the usual “cowboys and Indians” action. However, when sufficient delicacy and tact was used, Code Westerns could be free from graphic or gory violence. The only violent part of this film was a fierce Apache attack on the stagecoach, but there was no excessive blood or gore. Arrows flew, bullets whizzed, and Indians fell from their horses, but there was no focus on the bodies. I appreciate the delicacy used and the fact that a climactic shootout happens offscreen. A difficult plot point which was handled properly is the character of Dallas (Claire Trevor). We never learn exactly what her profession is. Some reviews refer to her as a woman of the oldest profession and others call her a saloon girl. I prefer to think of her as the latter, but it is very vague. All we really know is that the moral guardians in the first town have her thrown out, as well as the drunken Doc Boone (Thomas Mitchell). However, the snobbery of these women and some passengers of the stagecoach is so extreme that one can believe they would shun a saloon girl. The PCA initially had concerns about Doc Boone’s habitual drinking and intoxication, but I wouldn’t say it is glorified. It is obvious that the likable fellow is a competent physician, but his alcoholism has made him an outcast from society. Other characters refer to him as a drunken beast and a disgrace to the medical profession. When his medical knowledge is vital, he seems ashamed that he is so drunk. He consumes large quantities of black coffee and splashes himself with cold water to sober up. Although he doesn’t give up drinking during the film, I wouldn’t say that his drunkenness is condoned or glorified. This movie contains beautiful messages about love, loyalty, duty, and judging people for their hearts, not their reputations. It is uplifting as well as very entertaining. 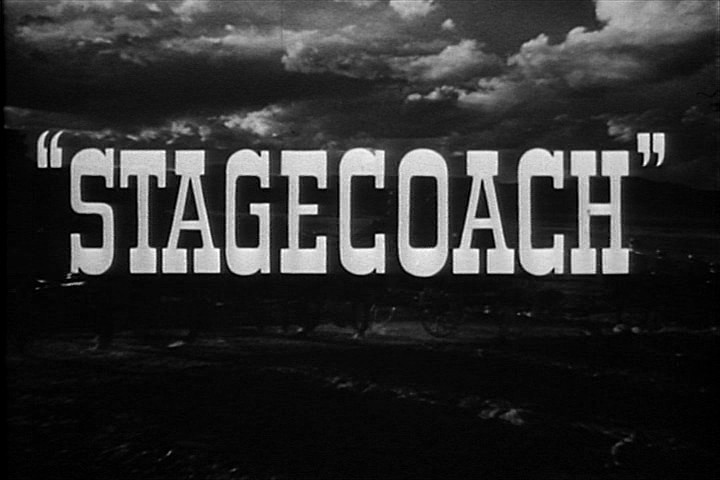 I highly recommend this film. You don’t have to be a big Western fan to enjoy it. My mother, my sister, and I watched it together, and we all enjoyed it immensely, so I think it is a film which can be appreciated by women as well as men. It is appealing because it focuses on people’s lives and problems rather than just action. It was nicknamed “Grand Hotel on wheels” when first released, and the title is appropriate, since each character has a fascinating story which is interwoven with the others’. Claire Trevor gives a very emotional performance as Dallas, remaining kind and sweet even when others snub her. John Wayne is strong yet very sensitive as the Ringo Kid, the outlaw who just wants justice to be served. This was the film which made John Wayne a big star and defined him as a Western actor. You can see why this performance brought him to new heights, since he is a very intense character while being a true gentleman. One of the most powerful supporting performances comes from Thomas Mitchell as Doc, which one him an Academy Award. This was just one of the five powerful supporting performances he gave in 1939, but it was the only one for which he even received a nomination. Brilliant though it is, Rebekah and I agreed that his performance was not exceptionally better than some of his other roles. There were so many amazing films made in 1939 that they could’t all be honored with the biggest awards, so some films and actors received acknowledgement from smaller awards. The rest of the cast is wonderful, as well. I appreciated the beautiful Arizona locations and the fact that Navajo Indians were used to play the Apache. They lent a real sense of authenticity to the film.

This is my entry in The 110 Years of Claire Trevor Blogathon, hosted by Virginie Pronovost of The Wonderful World of Cinema and Crystal Kalyana of In the Good Old Days of Classic Hollywood. This blogathon is in honor of Miss Trevor’s 110th birthday, which would have been on Sunday, March 8. This is the third film I have seen with Miss Trevor and only the second Code film. I was amazed by her Academy Award-winning performance in Key Largo, so I was anxious to see more of her work. She is so deep in this film. She is very emotional and vulnerable as Dallas, whose only friend at the beginning of the film is her fellow outcast, Doc. During the stagecoach trip, the Ringo Kid treats her like a lady, and she immediately appreciates this. By the same token, she treats him like a gentleman of honor, while some other passengers regard him as a troublesome jailbird. Even though Mrs. Mallory (Louise Platt) is bigoted toward him from the start, Dallas is always kind to her. She tries to make the dainty woman’s trip as comfortable as possible. When Mrs. Mallory has a baby, Dallas tends to her and her child with tender care and true love. When he sees Dallas’s nurturing maternal nature toward another woman’s child, Ringo knows that he loves her. You will love her performance and the entire film, too!