We are now in the tenth week of 2020, and it is time for the seventeenth article in our most frequently-published series here at PEPS, 100 New Code Films. This series gives me a schedule for watching American Breen Era (1934-1954) films which I have never seen before. It is easy to fall into the habit of just watching and rewatching your old favorites. While you can never grow tired of some films, there are so many more great films which we have yet to discover. Through this series, I have committed to discovering 100 “new” classic films this year. 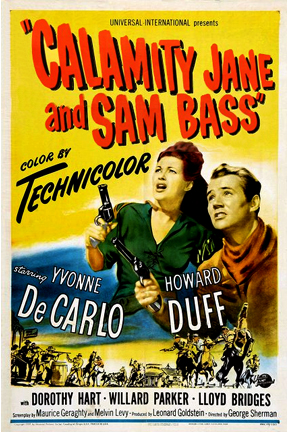 Today’s topic is Calamity Jane and Sam Bass from 1949. One of the nicest things about this series is the opportunity it gives me to participate in blogathons without writing additional articles. I can make my entries in this series contributions to blogathons, and this gives me definite topics. This weekend, Ruth and Kristina are hosting another year of the O Canada! Blogathon. This annual celebration of films and Hollywood artists from the Great White North is a greatly-anticipated and popular event in the blogging world, but I haven’t had the opportunity to participate in previous years. This year, I decided to join the celebration with an article about a new Code film starring a Canadian actress, Yvonne De Carlo. This film is included for free with Prime Video, so I watched it on Thursday. An Indiana farm boy arrives in a wild Texas town, where he immediately earns the mistrust of the sheriff but catches the eye of his beautiful sister. As the town prepares for an annual race, the newcomer meets Calamity Jane, a daring horsewoman who likes him right off. When he borrows money from the sheriff, who employs him at a ranch, to make him a bet which wins him enough money to buy the fastest horse in town, he loses his job and sets off on a cattle run. He hopes to make enough money to eventually have his own ranch and marry the sheriff’s sister, but misfortune in a crooked horse race sets him on a dangerous path with Calamity Jane.

This is a good Code film. It is free from objection. Although it is a Western with a lot of action, there is no violence or graphic content. There are a few shootouts, but none of the injuries or deaths which result are distasteful or offensive. In addition, there is no unacceptable language, nor are there indecent costumes. I appreciated the lack of improper suggestion in the relationship between outlaws Sam Bass and Calamity Jane. There is nothing unacceptable in this film. It is an entertaining film without the inclusion of inappropriate material.

I recommend this film to my readers. The acting is very good. I thought Yvonne De Carlo was convincing as a the Western woman who is athletic but still very feminine when it comes to her attachment to Sam Bass, the man she loves. Howard Duff creates a riveting characterization of the simple young man who just wants to make an honest living for himself but who gets on the wrong path because of unfortunate circumstances. Dorothy Hart is lovely as the sheriff’s sister, the nice girl, the one whom Sam really wants to marry. The rest of the cast is great, as well, creating an intriguing and diverse cast of characters as a backdrop to the interesting story. This fictional tale is based on real events which happened to outlaw Sam Bass. Calamity Jane also is a historical character, although her romance with Sam Bass is fictional. Western fans will enjoy this film, but it has enough romance and additional plot material to interest those who don’t generally love the genre. I found it very enjoyable, and I think that most other classic film fans will, as well. The Technicolor alone makes it worth watching, since it beautifully showcases the gorgeous desert scenery and the lovely ladies in the cast.

This is my entry in The O Canada! Blogathon, hosted by Kristina of Speakeasy and Ruth of Silver Screenings on March 6-8. Calamity Jane and Sam Bass qualifies because it stars Yvonne De Carlo, who was born in British Columbia, Canada. This film hardly seems to qualify in a blogathon about Canada, since it is from the most American of genres, Westerns. However, Hollywood always has drawn artists from all over the world, and the Canadian performers have always been numerous.

The star of this film is the Canadian cowgirl, Yvonne De Carlo as Calamity Jane. Although born in Western Canada rather than the American West, Miss De Carlo does a very effective Southern accent in this film. Whether riding a horse, staging a jail breakout, or aiding a robbery, Calamity Jane is a woman as loyal as she is unpredictable. This is only the third film which I have seen with this pin-up girl and only the second Code film. I like her acting, and I look forward to seeing her in more roles. She was certainly very memorable as Calamity Jane.