Today is Sunday, so it is time for my second article in the ninth week of my series about reviewing American Breen Era (1934-1954) films which I haven’t seen before, 100 New Code Films. I use this series to keep a consistent stream of new content on the website. Having to watch two new Code films each weeks gives me a good excuse to watch a lot of movies which I have been wanting to see for a long time. In addition to the unseen films we have on DVD and VHS in our collection, there are dozens of new Code films which are included with Amazon Prime. When I haven’t signed up for a blogathon, I take the opportunity to write about movies which I have been wanting to see.

Today’s topic is Sunset Boulevard from 1950. I have been curious about this film for some time, since it is one of those highly-acclaimed classic films about which ones hears a lot. When I saw that it was included free with Prime Video, I added it to the watchlist and was eager to watch it. Since I didn’t have any blogathon commitments for my second article this week, I decided that I would watch it at last this week. I watched this film on Wednesday.

This movie is narrated from beyond the grave by the leading man, an unsuccessful writer whom we see floating dead in a swimming pool at the beginning of the film. He tells the story of his tragic experiences in a flashback. Months earlier, the out of work screenplay writer is about to lose his car, and he can’t sell any of his stories to his contact at Paramount. When he is being pursued by the finance men, his car gets a flat tire, so he has to pull into a run-down Sunset Boulevard mansion’s driveway. He soon discovers that the 1920s house is not abandoned but inhabited by a silent film star and her devoted butler. The middle-aged woman is mentally stuck in her glory days of silent films but has written a screenplay for making her come-back, so she hires the handsome young writer to revise her work. He soon finds his bags moved into the guesthouse and realizes that she wants him to be her companion. Although he feels a growing attraction for a pretty young reader at Paramount who is his friend’s girl, he begins to realize that the older woman is obsessed with him and doesn’t want to let him go. 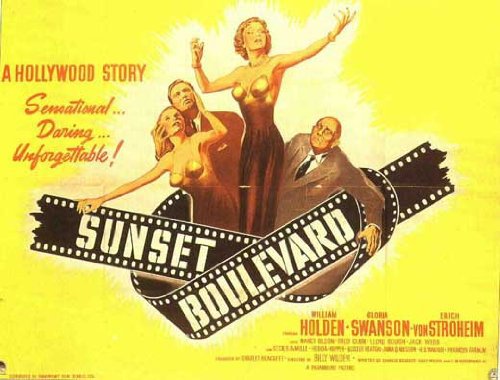 This is a fair Code film. I was very pleased with the decency and restraint shown in this film, especially considering it was directed by Billy Wilder. This film avoided so many mistakes which could have been made in terms of Code violation. There was no unacceptable dialogue. There wasn’t even a single forbidden expression. All the women’s costumes were decent. The most challenging aspect of this film was the questionable relationship between the young writer, Joe Gillis (William Holden), and the aging silent star, Norma Desmond (Gloria Swanson). It is obvious that Norma quickly develops an intense passion for Joe, the handsome young man who brings some excitement to her life. He knows that she is deluded from the beginning, but it takes some time for him to realize how madly she loves him. The PCA was concerned about the implication of an illicit affair between the two, but I think the handling was excellent. When the guesthouse’s roof begins leaking, Joe is moved into the suite next to Norma’s. They never are shown to be sleeping in the same room, nor is such a situation directly implied. The only slightly suggestive scenario occurs on New Year’s Eve. Norma attempts suicide after quarreling with Joe. When he returns to the house because of a phone call from Max, the butler, he finds her in her room with bandaged wrists. Feeling sorry for her, he tries to console her. He sits on the side of her bed and says, “Happy New Year, Norma.” The hysterical woman calms down and replies, “Happy New Year, darling,” She grabs him and pulls him down toward her. The scene fades out before they even kiss. It is obvious that Joe is Norma’s “kept man,” a gigolo of sorts. He is humiliated that Norma buys clothes for him, lavishes expensive gifts on him, and offers him any luxury he wants. However, he doesn’t have any freedom. He obviously has a bad opinion of himself for allowing an older woman to support him, but he finds the situation too tempting to desert. Nevertheless, I was very pleased by the delicacy with which the situation was handled. The main objection which I had was that, when we see Joe’s corpse floating in the swimming pool at the film’s opening, his eyes are opened. It was generally forbidden for dead people’s eyes to be opened, since it looks quite grotesque. Also, a Paramount executive who has ulcers burps quietly in one scene. It is fairly subtle, but burping was usually forbidden in Code films. For these few problems, I classify this film as fair. However, the delicate handling of difficult topics and the strong cautionary moral message is similar to that seen in many perfect Code films.

I highly recommend this film to all my readers. It paints a realistic and impacting picture of a woman who is trapped in the past of her own glory days. She can’t realize that time has marched on, leaving her in the prison of her own mind. Gloria Swanson plays this role magnificently, coloring Norma Desmond with flamboyant drama yet perfect subtlety. She transitions from seeming eccentric and pompous to deeply insane. Although she has moments of lucidity, strange rituals and bizarre statements reveal just how much her mind has turned. The most startling thing about this character is that she truly believes that she is as young and beautiful as she was when she made movies over twenty years earlier. I expected there to be a moment of horrible realization when she saw herself in the mirror and realized that she was no longer young, but that never came. She was too far gone. William Holden does a fabulous job of interacting with this mysterious woman. His narration provides the thread which weaves the fascinating plot. He is cynical, greedy, and selfish, yet he also is strangely sympathetic, patient, and kind to Norma. He doesn’t want to move into her house. He comes to her mansion by accident, is invited in through mistaken identity, and soon finds himself hired to revise her screenplay. The next thing he knows, Max has moved his bags into the guest room, and he is practically a prisoner. William Holden does a marvelous job creating a character who believably lets fate take him in a strange direction through an unexpected twist. The third member of the pivotal triangle is Erich von Stroheim as Max, the morose butler. He is brooding, strange, yet powerful. As the story unfolds, we learn more about this mysterious man and the reason for his deep devotion to the troubled actress. This film’s gorgeous backdrop is Norma’s decaying Sunset Boulevard mansion, which is both beautiful and haunting. Complete with a pipe organ, the gondola bed from the silent version of Phantom of the Opera from 1925, and the hoards of pictures, this palace is the perfect lair for a she-phantom. Ironically, the film was shot in a 1920s mansion on Wilshire Boulevard which was called the Phantom Mansion. I’m getting carried away with this review, so I must summarize now. This is a dramatic, gripping, and intense film which everyone should see at least once. Classic film fans will appreciate it for its rich historical references and fascinating cameos. Those who are less familiar with classic films will find this to be a great introduction into the world of Old Hollywood. I am glad that I have finally seen this film. It is a little disturbing, but it is a masterpiece. This is one of the greatest films Billy Wilder ever made. It shows what brilliant films he created when the Code guided him to delicate, subtle, yet highly-impacting greatness.